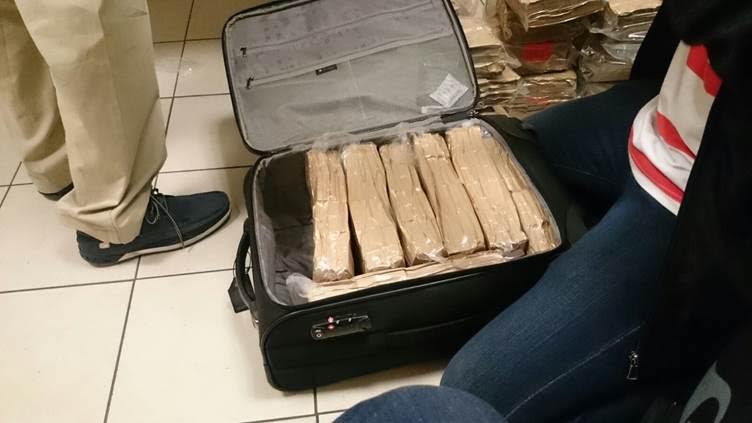 Share on Facebook
Tweet on Twitter
MOGADISHU (HAN) November 4.2016.Public Diplomacy & Regional Security News. More than $1 million in cash found in two suitcase bags in Mogadishu airport, destined for Hargeisa, Somaliland, is the largest cash seizure ever made by the Mogadishu airport authority to stop smuggling cash to extremists and money laundering schemes in Somalia.
Federal  custom officials intercepted and seized over $1.5 million of undeclared cash hidden in a hand luggage from a traveler at the Mogadishu airport Thursday, one of the largest discoveries by National security forces who seized illegal cash being smuggled into the country before, officials said.
Somalia has tightened security at the Mogadishu International Airport after Al Shabab group bombed a Somali airliner Daallo which made an emergency landing with a gaping hole on its side in February.
Federal Somali custom Officials said that the money was seized after a passenger carrying a suspicious luggage was stopped upon his arrival at the airport and was sweating profusely” as he passed through customs with the luggage.
The illegal cash smuggler was reportedly heading to Hargeisa, the capital of Somaliland at the time of the arrest is being held at custody in Mogadishu.
Security agents who searched through the luggage found piles of money stacked inside the bag.
The Turkish government, has deployed modern additional armed officers and modern screening system to help passengers move them through lines faster under a proposal endorsed by the fedear president of somalia.