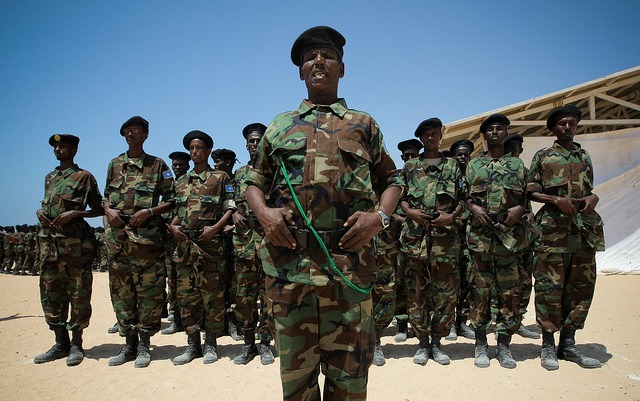 Share on Facebook
Tweet on Twitter
Mogadishu (HAN) December 3, 2014. Public diplomacy and National security news. The integration of regional security forces is a critical element in both the further development of the Somali National Army (SNA) and the achievement of state-building goals, in particular the formation of a Federal Somalia.
Vision 2016 and the Somali Compact, adopted by the Federal Government of Somalia in 2013 articulate specific priorities towards ensuring the security, political and development progress of Somalia. The London Security Conference (September 2014) further supported the integration of regional armed forces into the Federal security institutions as one of those priorities.
Concurrently, the FGS aims to ensure a unified national security sector structure and creating increasingly cohesive entities within that structure.
Our existing partnership with Puntland, the emergence of the Interim Juba Administration (IJA), the establishment of the Interim South West Administration (ISWA), and the work of the committee for the formation of the Interim Administration for the Central Regions (IACR) are testament to the FGS’s commitment to a unified, federal Somalia.
The development of a national security force, and in particular the Somali National Army (SNA) must evolve in parallel with the creation of federal states. Formally integrating the various regional security forces is the next step in this evolution.
We recognize and acknowledge the various security forces currently aligned with the emerging states and interim administrations, including, but not limited to, the Puntland Darwish, the Interim Juba Administration Security Forces (IJASF), the forces associated with Interim South West Administration and Ahlu-Sunna Wal Jama’a (ASWJ). The FGS envisages all of these ultimately becoming part of the Somali National Army (SNA).
It is anticipated that the SNA sector divisions will fall in line with federal boundaries to improve coordination of forces and promote stability across Somalia. Progress on technical issues such as boundaries is essential to continue positive momentum towards the integration of our forces.
It is our intention to negotiate and formalise an agreement to this end with the Interim Juba Administration, Interim South West Administration, and Puntland in the aftermath of the High Level Partnership Forum in Copenhagen.
We also intend to begin a similar dialogue with the committee for the formation of the Interim Administration for the Central Regions (IACR). We expect this agreement to be formalized as soon as the IACR is formally established.
The integration of the various existing regional security elements into one, nationally cohesive force is crucial for the future of Somalia. Now is the time to take advantage of the success of Operations Eagle and Indian Ocean that have driven Al-Shabaab from their strongholds in the countryside. But the momentum generated following liberation of critical towns and districts from al-Shabaab control must be maintained. To achieve this, we must all commit to the development of a fully representative, meritocratic and accountable professional army.
In line with this statement of intent, the FGS will oversee the urgent development of a concept note and operational plan that will layout the steps necessary to ensure our commitment is realised. Furthermore, the FGS reiterates its determination to implement all resolutions mandated by the United Nation Security Council (UNSC) on children in arm conflicts as part of the ethos of protecting and serving the people of Somalia.
The Geeska Afrika Online is Free government-funded. HAN (Horn of Africa newsline) shapes its editorial policy free from political and commercial influence.
The latest updates Follow twitter.com/GeskaAfrika