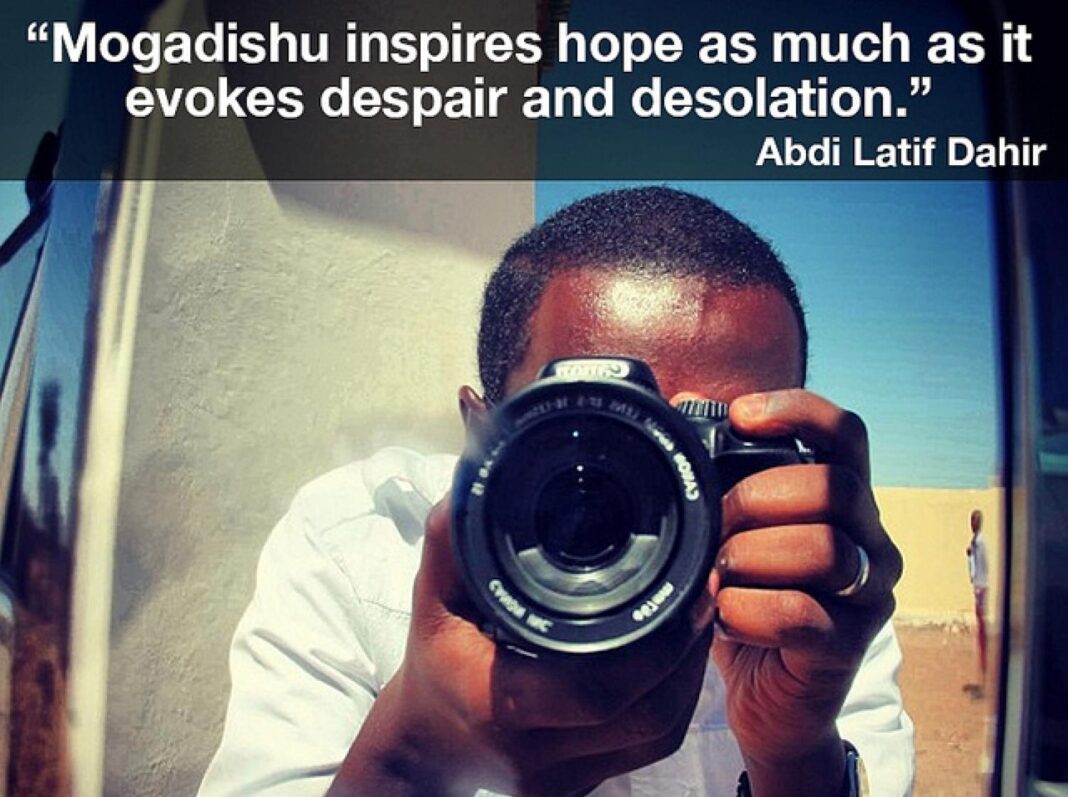 Mogadishu (HAN) November 13, 2014. Expert Analysis, Your Power & Regional Influence Magazine, opinion page By Abdi Latif Dahir (Shan Journal). THE ROAD BACK HOME begins before dawn. Before the rose pink light of the day breaks the skyline, the long queues of people at Nairobi’s Jomo Kenyatta International Airport form in a procession-like fashion. Here, almost every day of the week, hundreds of Somalis – and a few non-Somalis – shove and shriek at each other in the chilly, slow mornings, all in a bid to reach the check-in counter on time.

Thank you Abdi Latif Dahir for this – a beautiful look at Mogadishu, and a mix of sadness and joy at the changes that have taken place. 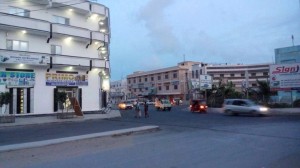 The infirmities of old age and the afflictions of displacement are evident here, as wrinkled refugee grandmothers donning long jilbabs struggle to rein on their grandchildren, while keeping an eye on their overstuffed bags. Middle-aged men wearing colorful skullcaps push their full trolleys, as they lament the slow processing of luggage and papers by the custom and immigration officers. The self-styled businessmen and politicians with their Samsonite bags also join the lineup, along with groups of gilded diaspora youths wielding their Western passports and speaking with lilts of British and American accents. All of them combine to form an interesting caravansary, a rout of strangers united by fate, language, ethnicity and a longing for a home that never was.

I have always viewed this mess at the airport as choreographed chaos. From the first time I flew from Nairobi to Mogadishu in September of 1997, the disorderliness and confusion has always acted as a prelude to what was to come at the end of the flight, an initiation into the messy reality of Somalia. From that first trip, I remember how my mother huddled my younger siblings and I together, afraid that we would stray and get lost. I also remember my father, in his close-fitting suit, holding the boarding passes tight in his hands, shooting a frown of disapproval at the frivolous men barging the line. After two hours of non-stop wobbles, the rickety plane banked steeply and landed in a dusty, makeshift runway 100 kilometers outside Mogadishu.

Somalia’s capital was at the time, a city marooned in time. Mogadishu was a shattered place, a pale illusion of a city that once was, a cosmopolitan hub that was host to a mélange of different cultures and nationalities that was no more. Since 1991, Mogadishu had become synonymous with incessant fighting among its warring warlords who left the city in complete ruins. To say that they reduced this Indian Ocean port city to rubble was an understatement. The glaring contrasts of the postcards and images from the 1970’s and 80’s with the reality on the ground showcased a city that became the ground zero for the brutal and fatal miscalculations of war.

Daylight in Mogadishu was reflected in the image of torn-down buildings strafed with bullets from all sides. Entire neighborhoods, once representing a lush, extravagant lifestyle, were bombed out of existence, peppered with machine gun pockmarks. If you walked down the city’s streets and neighborhoods, a miasma of sorrow and despair rose from the memory of war, of stories about uncouthmooryaan,  young undisciplined gunmen who pillaged and plundered their way through the city. Mogadishu was Exhibit A of the callousness of the civil war that destroyed Somalia and led to its disintegration into regional governments ruled by clan fiefs and military commanders. It was as if Somalia’s warring factions poured their rage against Somalia’s former leader Mohamed Siad Barre first, and against themselves later, into this one city.

Nevertheless, Mogadishu for me was an incomplete adventure story, a city shrouded in mystery. The mere act of going to school or walking to the madrassarepresented a time to discover new things about the city and its inhabitants. I still remember the close relationship we developed with the cranky, one-legged warlord who erected a barrier on the road leading to our school. There were the stocky Egyptian teachers in school whom we teased for savoring the sweet Somali bananas all the time – even inside classrooms. There were the frail internally displaced persons who walked around the city with all their belongings, after the El Nino destroyed their makeshift tents. There were the cholera victims, whose graveyards were strewn all over the city – in playgrounds, front yards and even outside our school’s gate. There was the unwholesome smell coming out of hospital wards full of unlicensed doctors with no formal training. Mogadishu in those days personified the abominable cruelty of war and its aftermath, and I experienced it on a daily basis. It would be eight years before I finished school, packed my bags and left the city for Nairobi.

DESPITE ALL THIS, for the last three years, a certain gall of positivity has overtaken Mogadishu, as the city unravels itself as a new destination of choice in the Horn of Africa. The dulling regularity of war and destruction is gradually fading, as the city regains its lost glory. This lull in the fighting comes at the heels of al-Shabaab’s removal from Mogadishu in mid-2011 by the African Union Mission in Somalia (AMISOM). The troops defeated the militant group in early August, a move that precipitated the visit of Turkish Prime Minister Recep Erdoğan (now president-elect), who became the first international leader outside Africa to visit the country in two decades. The rest of the story unfolded itself like an opium dream, with one event leading to another, until the only narratives coming out of Mogadishu were those rhapsodizing about the city’s blasted beauty, its pristine beaches and its attempt at a comeback.

The city’s new groove is exemplified in the busy runways of the main international airport, where thousands of Somalis are landing every day, coming back home from as far as Australia and Alaska. Foreign journalists, filmmakers, musicians, diplomats and presidents are also taking the plunge and visiting the bullet-ridden city, all in the belief that the peace taking hold in Mogadishu is just but a fortunate stroke of serendipity, the mercurial turn of events unimaginable.

The relative peace in Mogadishu and the surge in the number of the Somali diaspora flocking back to the country, represents a cartwheel moment not only for Mogadishu as a city, but also for entire Somalia. The returnees have started investing in the city, opening up printing presses, flower shops, ice cream parlors and drycleaners. This has inadvertently helped boost the local economy, which for years was commended as a perfect model of “freewheeling, stateless capitalism.” New roads are being tarmacked, schools are being renovated, banks are opening new branches, and plush new hotels are sprouting up everywhere. The nightlife is also picking up, demonstrated in the moonlight trysts shared by courting couples in the beachfront restaurants. Noisy packs of teenagers also romp around deep into the night, dribbling football in once-deserted neighborhoods that now spot brand new solar-powered streetlights. Mogadishu is even living up to the Moroccan explorer Ibn Battuta’s observation that people in the city consumed huge amounts of food. Just as he wrote hundreds of years ago, “extremely corpulent and large-stomached” men and women sit in restaurants and pizzerias across the city slurping noisily and arguing clamorously about the latest political gossip in town.

In Mogadishu’s busy and bustling streets, the story of the war and its aftermath is also being reconstructed – both physically and literally. Amidst the din of dickering in the Bakhaaraha Market, where our school bus was once shot at, traders offer to narrate hardy tales of tough times, coddling back those memories to life with refreshing candor. Across Mecca al-Mukarramah and Wadnahathoroughfares, the dilapidated, bullet-riddled buildings are also hurriedly being patched and painted in bright colors, erasing the last remnants of a bloody war.

AMIDST ALL THIS, I feel like I’m an interloper in the city of my childhood, like I am experiencing it all afresh. The stories in the media are no longer about the warlords but about al-Shabaab, and the nascent Somali government they are battling, which took office in 2012. In this cesspool of a city, journalists are still killed, legislators are shot in broad daylight, and al-Shabaab has attacked the seats of all three branches of the government in Mogadishu killing dozens. The largest city of Somalia is also now host to an amalgam of citizens holding different passports and uniquely diverse professions. There are American aid workers, South African mercenaries, Ugandan and Burundian peacekeepers and Kenyan waiters all coming together to add a different narrative to the story of Mogadishu. The existing chasm in the city is also not only between the rich and the poor, but also between the locals versus the diaspora, a complex thread that threatens to undermine the new talk of progress and peace. Even as large sections of the local population live in dire poverty, it is not hard to spot packs of diaspora youngsters driving tinted vehicles and dining across restaurants in Mogadishu – creating a feel that they purely came back to enjoy the fruits of peace on their own.

The city’s old redolence of incense mixed with the salt air blowing from the sea is also gone. It has been replaced by the smell of wet concrete from the new buildings and roads, besides soot emitted from the exhaust pipes of old vehicles clogging the city’s streets. The conversations in the busy roadside cafés have also moved from one of hope, resilience and a better tomorrow, to those discussing the latest attacks in one corner of the capital or around the country. People in fact speak with a sense of self-abasement, as if in Mogadishu’s renewal, they are apologizing for the mistakes of the days past. Mogadishu, in reality, has become an oxymoron: prospering as it becomes more dangerous; shedding off its gloomy past even as it resists to adapt its new glamour; expensive to live in as tens of thousands are on the verge of dying here from acute hunger. Mogadishu, in short, is living up to Antonio Gramsci’s assertion that “the old is dying and the new cannot be born; in this interregnum a great variety of morbid symptoms appear.”

But the story of Mogadishu’s recovery is just beginning to unfold with no set course of direction. It is like in the old days still mysterious and puzzling. I travel here every few months for work, and every time, I feel like with the passage of time, Mogadishu deliberately aims to alter the indelible memories I had here as a child. This is not to say that I miss the war and its destructive effects, but that I look back at those impossible days with affection, because in their remembrance, I carry the image of a battered capital trying to withstand its demolition by its own inhabitants. Now, every new school I see open represents a sign of the situation progressing; every fresh killing an ill omen to what could possibly go wrong.

A lot could possibly go wrong in Mogadishu, the capital of this seahorse-shaped nation-state that is still full of untold stories and unturned stones. But as more people come back here, both from within the country and across the world, one thing is for sure: the winds of change have arrived and there’s no stopping them. Whether that change will be positive or negative, only time will tell. After all, this is just the beginning.