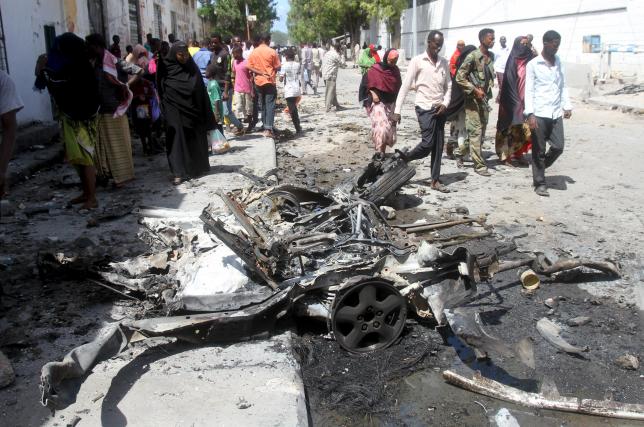 Mogadishu (HAN) April 21, 2015 – Public Diplomacy, Regional defense and Maritime Security News.  A suicide bomber from the Somali militant group al Shabaab on Tuesday rammed a car laden with explosives into a busy restaurant in the capital Mogadishu, killing at least 10 people and wounding more than a dozen others.

The lunch-hour explosion also wrecked a tea shop next door and set fire to nearby petrol drums, sending a huge plume of smoke above the Indian Ocean port city.

The car bombing took place a day after after an al Shabaab suicide bomber killed six people, including four United Nations staff, during an attack on a U.N. minivan in Garowe, a city about 1000 km (600 miles) northeast of Mogadishu.

Al Qaeda-linked al Shabaab has staged a string of attacks in Somalia and surrounding countries aimed at imposing its harsh brand of Islam and overthrowing the Somali government, which is backed by Western donors and African peacekeepers.

Musab said it targeted officials from government ministries and the presidential palace who eat at the restaurant.

“A policeman opened fire to stop the car bomb but it was all in vain. The policeman died and the car bomb rammed into the gate in the busy restaurant,” Major Farah Hussein, a police officer at the scene of the attack, told Reuters.

A second police officer, Colonel Osman Ibrahim, said 15 people were wounded in what he called a suicide bombing.

“These are mostly civilians who were having lunch at the restaurant,” Ibrahim said.

Earlier this month, al Shabaab fighters killed 148 people on a university campus in the Kenyan town of Garissa, about 200 km (120 miles) from the Somali border.

The group has said it wants to punish Kenya for sending troops to Somalia as part of the African Union force. Reuters