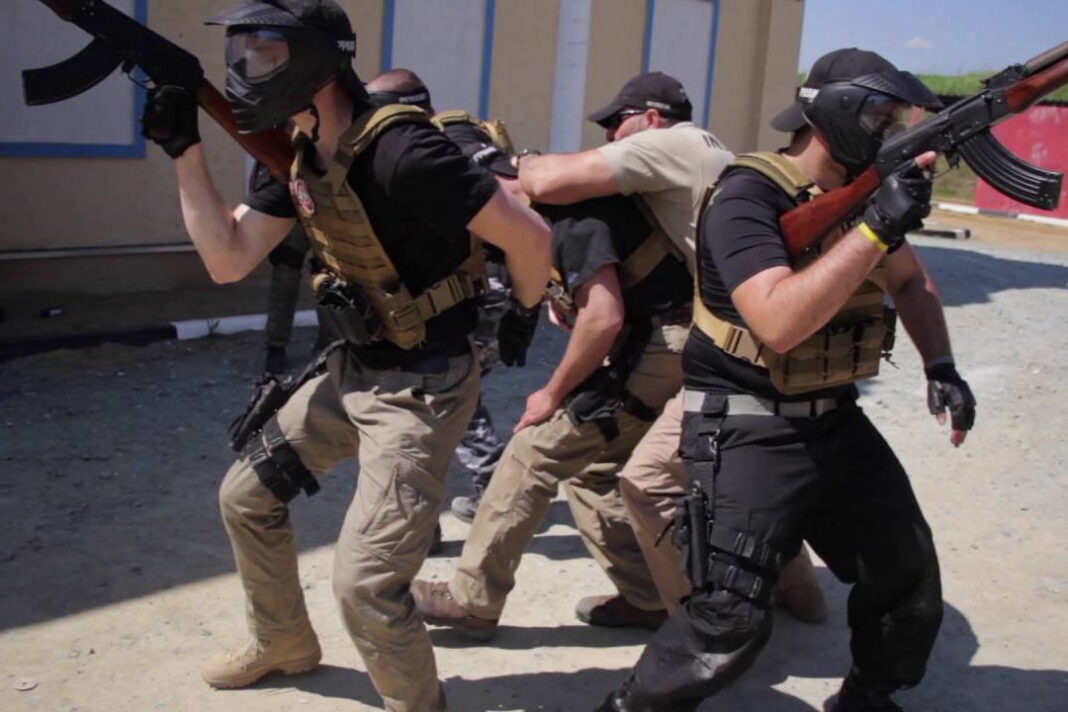 Increasingly, nations are deploying private security contractors to troubled and remote parts of the world.

Beyond the scope of democratic accountability, opaque and operating beyond and around international law – they are proving to be useful agents of diplomacy and proxy wars.

But there have been well-publicised failures. In 2007, Blackwater contractors killed 17 unarmed Iraqis and injured 24 others. Blackwater went on to change its name to Academi and continues to provide services to the Pentagon around the world.

Also in Iraq, the Pentagon hired CACI Premier Technology to run the infamous Abu Ghraib prison. The logistics company is alleged to have told military police to soften up prisoners for interrogation.

And it is estimated the US government lost as much as $60bn to fraud by contractors in the early years of the Iraq conflict.

Right now, the industry is estimated to be worth up to $249bn.

More nations are deploying mercenaries to reshape battlefields. Russia has used the Wagner Group in Ukraine, Libya and Syria. And as Nicholas Haque reports exclusively from the Central African Republic, Russia is training government forces at the request of the president.

“The danger of using mercenaries or contractors is that they can get in scraps or fights that can suck others into a larger conflict,” said Dr Sean McFate, professor at Georgetown University and author of The New Rules of War. “Mercenaries’ accountability and safety have been a problem from the start. Mercenaries are the second-oldest profession. So how do you control mercenaries?

Is Saudi Aramco relevant in a green economy?

In the end, it wasn’t the blockbuster it was made out to be. Saudi state-owned oil giant Aramco is not worth $2 trillion, and there is plenty of blame to spread around for such misplaced exuberance.

The guarantee of $75bn in dividends every year for the next five years was not enough to attract international investors.

But it was a price put together by investment bankers desperate to cash in on the biggest initial public offering of the year.

So now the plan is only to sell shares to Saudi nationals and investors from the Gulf region.

The value could be as high as $1.7 trillion.

But as Aramco becomes a public company its promise to deliver a massive dividend may put it at odds with OPEC, which is trying to boost the price of crude.

“It’s always difficult to estimate the reaction of the market, and what the Saudis found is that the initial estimate that was announced by the Crown Prince now four years ago, has not been validated by the market,” said Professor Giacomo Luciani from the Graduate Institute of International and Development Studies in Geneva, where he runs the Executive Master in Oil and Gas Leadership. “It’s something that can be managed, but certainly the investors know that the company is not a pure profit maximiser.”

Alphabet, better known the world over as Google, is using its cloud-computing might to muscle in on the lucrative video games industry, which has been long dominated by Microsoft’s Xbox, Sony’s PlayStation and Nintendo.

Google’s Stadia platform will be streamed from the cloud and does away with expensive consoles.

And Apple will introduce its Arcade service.

Two of the existing giants of the industry are not taking the challenge lightly: Microsoft and Sony surprised many with a partnership to developing their own cloud solution.

It is estimated that more than 2.5 billion people play computer games every year, and eSports enjoy an audience of 458 million a year.

“It’s a huge industry and when you look at the types of platforms, you’ve got a huge mobile gaming sector, you’ve got a huge console gaming sector, the PC sector … there’s so much space in that industry for smaller players to actually co-exist and to a certain extent we are always competing against any other gamers out there, but there is going to be a huge audience and people want to play different styles of games. So we don’t necessarily have to compete with the big boys,” said Omar Khan, managing director of No Code Studios.