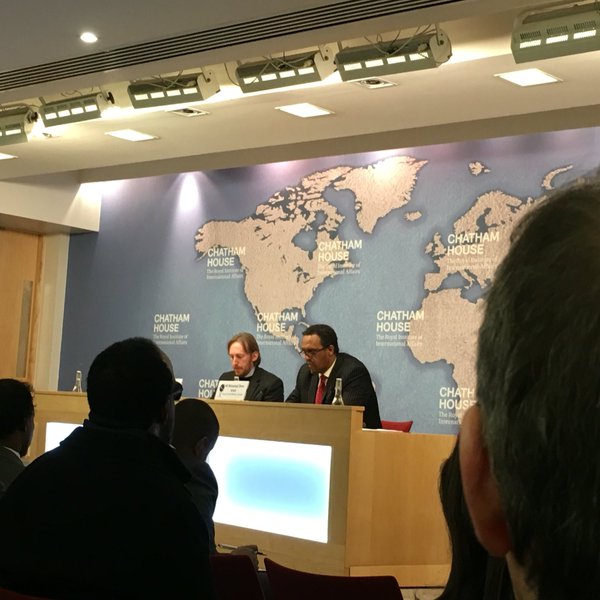 Ladies and Gentleman, let me begin by expressing my gratitude to Chatham house for hosting this gathering and for inviting me, to address this distinguished guests on the subject of Maritime security and development in Africa but also allow me to apologies for not being there physically, I’m sure you will appreciate it’s election season for us here in Somalia and there is much to be done.

However, on the subject of maritime security perhaps I should begin by emphasising the importance of the nexus between development and security. It is through a greater understanding and emphasis on the link between this two critical issues that we as Africans can truly improve the security of our maritime domain.

And no is this more evident than in Somalia, so let me briefly lay out Somalia’s maritime security situation, what I believe to be the driving force of insecurity and draw out a way ahead in order to fuel a discussion and your questions.

Firstly, pirate attacks off the coast of Somalia have been minimised since 2012 primarily due to expensive but effective counter-measures by shipping companies themselves, and action and deterrence by the flotilla of International Community’s (IC) navies off the coast of Somalia. The collapse of the pirate business model has for now reportedly alienated the coastal communities that previously supported pirates but this in essence should only be seen as a transition point.

The alienation may have developed as a result of the loss of income for pirate gangs however, the driving force of poverty which lures young men to work for pirate gangs and seduce coastal communities to provide a haven in exchange for income is still present.

This coupled with piracy’s simple tools and ability to quickly re-establish itself once again surely means it’s a menace waiting for its opportunity to strike again. Our task as the Federal Government of Somalia, therefore, is to deny pirate kingpins the conditions that will enable them to engage in this criminal activity. We are very much aware this can only be done by ensuring the establishment of governance in coastal areas, initiating the means to address the economic deprivation which provides the right environment or context for criminals to exploit our youth and the mechanism to solve the political grievance both real and perceived.

However, what I have warned against and continue to do so, is the risk of complacency as a result of the shipping industry’s need to re-establish margins but above all the  IC understandable wish to re-prioritise their naval forces to the Mediterranean migrant operations & to the Baltic which could present future piracy opportunities.

In the absence of an effective security forces, particularly, a Somali Coast Guard, which can take over the role presently carried out by the International flotilla. The piracy threat is likely to re-emerge only this time the pirates of tomorrow would be those who have gained experience having diversified in to the smuggling of contraband, people & weapons.

It is as result of this emerging threat Federal Government of Somalia judges the time is right to re-focus our maritime security effort away from the intensive counter piracy effort off the coast of Somalia, we have all become accustomed, to a two pronged approach, a soft edge strategy focusing on improving the livelihood of coastal communities, in order to remove the environment of hopelessness and despair that enables pirate gangs to exploit vulnerable communities and enable us to create the lasting conditions that will remove the reasons for piracy.

But also a hard edge strategy which focuses on building our security capabilities both at the federal and regional level. Particularly our Coast Guard which would be under a civilian administration

With more coastal security, Somalia’s people and economy can benefit from a potentially richly-resourced maritime domain found along the 3300km of our coast, the longest in mainland Africa: historically, five major ports [Berbera, Bosasso, Mogadishu, Merka and Kismayo] for export / import, and more ports to be developed in other Federal Member States [e.g. Hobyo & Garacaad]; fish as food and commodity; and fishing related industries including boat-building, processing, refrigeration, transportation, infrastructure building to support all of these, and so on; perhaps tourism and oil & gas extraction in the future.

Somalia already has tools to pursue its aim of establishing maritime security: a Maritime Resources & Security Strategy (MRSS) addressing the 6 Maritime pillars of Governance, Law Enforcement, Security, Safety, Response and Recovery, and the Maritime Economy; and a hierarchy of committees to progress its implementation with cross-Government, Federal Member State (FMS) & IC participation. Some capacity building is underway now and, after our upcoming elections, I would expect the new Government to prioritise maritime security development because it complements and cuts across the other priorities of our wider security architecture to defeat al Shabaab, address whole national unity, debt relief and implementation of our new National Development Plan.

In outline, I would expect an affordable but well-trained & equipped constabulary Coast Guard to be established. This would complement the existing maritime police forces which fulfil the traditional role of policing ports and their environs. Mutually supported by land-based coastal police forces, I would see the whole commanded, controlled and coordinated by a hub-and-spoke system of Maritime Operations Centres, operating as multi-agency platforms to host police, coast guard, customs, immigration, fisheries, licensing, coastal development agencies and the like. Where operational efficiency and geography allow, these Maritime Operations Centres might best be collocated with similarly hub-and-spoke Joint Operations Coordination Centres with, for example more Police, Army, Intelligence and Custodial Corps representation to form truly modern, multi-agency coordination centres.

In due course, we aspire to regenerate the appropriately-sized and effective Navy that we previously had.

There will be challenges on top of the many well-documented difficulties which Somalia faces at the moment. For example, we have to bring the whole nation with us as we move ahead with maritime security plans. In debate, we need to separate, as far as possible, the inarguable, technical & immediate need for maritime security from the politics of future maritime resource-sharing.

A public messaging campaign will be required to get the Somali people behind maritime regeneration and the isolation of criminals. The Maritime Resource & Security Strategy’s coherence with the National Development and Security Plans needs to be assured. It goes without saying that the support of the IC is hugely appreciated. But our coordination with the IC, and recognition that Somalis want to own decisions, can improve.

And it is on this last point – cooperation with the IC – that I would like to end. This conference, and the Togo extraordinary summit which we are preparing for, are particularly timely. We have a small window in which to appeal to the European Union for continued support as its mandate renewal is planned.

As a case study, earlier in 2016 about 400 al Shabaab were reported moving from Galmudug to the north by sea. EU NAVFOR is only mandated to conduct counter-piracy and not counter terrorism, people smuggling, narcotics, illicit charcoal trade etc. I don’t know whether NAVFOR units were in a position to respond but hypothetically, therefore, had the craft carrying the fleeing aS reported that they had been pirated then it is believed that EU NAVFOR could have intervened. EU NAVFOR shares information with Coalition Maritime Force (CMF) partners and CMF nations, again hypothetically, may have responded under their individual national rules of engagement. Clarity on this important point of potential support until Somalia is able to deal with such events on its own, will be appreciated. Similarly, we would hope that EU NAVFOR might consider sharing, with Somalia, information from what it witnesses off the coast of Somalia. I am thinking of all potential maritime threats but not least informing the best assessment of the magnitude of illegal fishing in our seas.

Thank you. I would like to open the floor for discussion and questions.