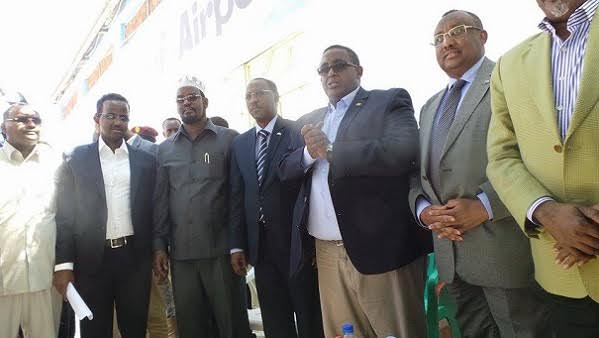 MOGADISHU (HAN) December 3, 2015 – Public Diplomacy and Regional Stability Initiatives News. The Federal Government  leaders help stop Fighting in central Somalia and removing barriers for Peace throughout Southern Somalia. The two regional president of Puntland and Galmudug regions, signed a local peace agreement to end to the militia clashes that have left more than dozen civilian and militia units in both regions.

Presidents of Puntland Abdiweli Mohamed Ali Gas and Abdikarim Hussein Guled of Galmudug, as well as regional administrators in central Somalia, agreed to a ceasefire of the skrimishes that destroyed the cridibility of the two regions. They will accept their agreements and remove the barriers that is the basic obstacle of the regional stability and security.

Local Peace Agreement to end the Militia Clashes. Both Militia troops have been engaged in a battle for control of a central Somali town of Galkacyo

The current Federal Somali Prime Minister Omar Abdirashid Ali Sharmarke, and the Ministry of Interior and Federal Affairs, Abdirahman Odowaa, who engaged the the peace deal, described it as ‘turning point’, calling on the two regional states to accept the peace deal to fullfill the agreement and end the blood shed that caused violence and hoplessness, which displaced thousands of people from their regional known town of Galkacyo.

Under the federal agreement and the deal signed by both sides, is to avoid further violence and incitement inorder to bring Somalia “a transitioanl states”. The two sides are also expected to form a combined militia troops that will report to the federal government security forces, to end the roots that created violance and mistrust.

Meanwhile, According to local sources and regional media reports: Clashes in Galkayo town, which involved heavy trucks mounted with machine guns and anti-aircraft rockets, erupted following an argument over construction of a new road by the Puntland state. The move was resisted by Galmudug forces leading to the two-week long battle.

The latest development is a major breakthrough with officials from both sides expressing optimism that it will finally end the clashes, which many feared would degenerate into a clannish warfare across the country. Somalia is just recovering from decades of civil war. Galkayo town is divided into two zones, where the northern portion forms part of Puntland state, while its southern part is governed by the Galmudug administration.