Home frontpage Somalia: Kenyan President “There is no greater love than to die for... 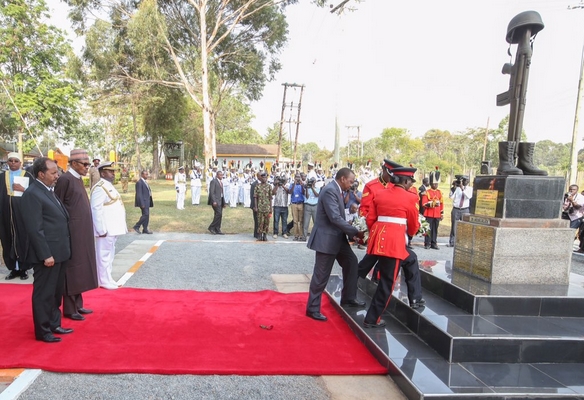 The three Presidents said the only way to honor the fallen heroes is to accomplish the Somalia peace mission and rule out any chances of retreating.

“The right thing to do for the security of our country, the safety of the region, and for the memory of those who fell, is to complete the mission,” said President Kenyatta. “We shall not relent.”

“Our brave heroes died defending the tenets of peace, democracy and security which all Kenyans cherish. We owe them a debt of honor and can begin discharging it by resolving never to forget their sacrifices.”

The three leaders were speaking at the Moi Barracks, Eldoret, during a special inter-denominational memorial service in honor of Kenya Defence Forces soldiers killed in El Adde.

“Our soldiers’ blood will not be shed in vain.”

He reminded Kenyans that terrorism is a global war which requires a collective global response.

Nigeria, like Kenya and Somalia has suffered the brunt of terrorism and both Buhari and Sheikh Mohamoud joined the memorial service to give moral support, comfort and courage to the country during this trying moment.

Responding to calls by the opposition to withdraw KDF from Somalia, President Kenyatta said: “They (opposition) have forgotten that the enemy has made it clear he will follow us home. And they have forgotten that, as good neighbors, we cannot leave the people of Somalia to the tender mercies of murderous terrorists.”

President Buhari, who is in Kenya for the first time said his country has in the past suffered from terrorism attacks from the Boko Haram militants who, he says, inflict pain, misery and death to both civilians and soldiers.

He said terrorists should have no place in modern society and must be eliminated.

“Nigeria stands side by side with Kenya in this fight against terrorism,” assured President Buhari

President Buhari said Somalia will forever remain indebted to what Kenyans have offered on behalf of the citizens of Somalia, describing the terrorists as ‘barbaric devils’.

Quoting the bible, the Chief of Defence Forces Gen. Samson Mwathethe said the fallen heroes loved their country and its people to the extent of giving their lives.

“There is no greater love than to die for your friends,” said Gen. Mwathethe.