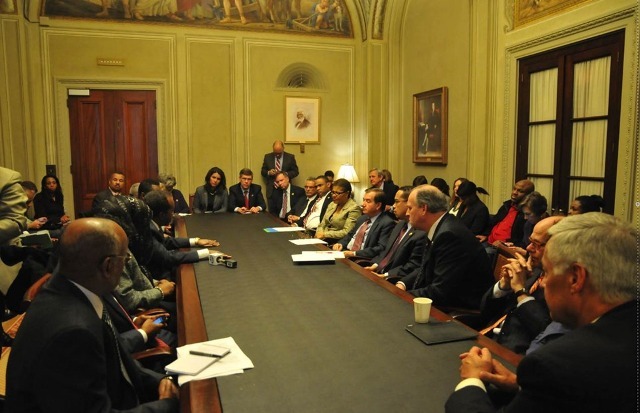 Minnesota (HAN) March 4, 2015 – Public Diplomacy and Regional Financial security news. According to Jibril Afyare, “Somali American community are not a threat, we are part of the solution”. Another Somali American community leader Abdirahman Mukhtar said, “We need to define and tell our story as a community of peace loving, civilized and law abiding citizens. We also need to work with the authorities so the rest of us will not be stereotyped.”

Financial security concerns:  For the  Somali-Americans who still have deep connections to their motherland, the scuttling of Merchants Bank transfer business sends mixed messages about the US’s plans for progress in Somalia. The ambassadorial nomination was trumpeted as a sign of US commitment beyond humanitarian aid and intelligence assistance. But, the Somali government has little influence beyond the capital of Mogadishu.

“With Merchants Bank stopping, the entire country will turn into a refugee camp,” Mr. Eishe says. “It is a total disaster.” Hundreds of millions of dollars flow from the US to Somalia in the form of remittances each year.

Following the bank’s announcement, US lawmakers issued a letter to Secretary of State John Kerry demanding a meeting. They say the current situation could throw Somalia and its “already vulnerable economy deeper into crisis.”

A spokesperson for Representative Keith Ellison, the Minnesotan Democrat who drafted the letter, confirmed for The Christian Science Monitor that the first of what is likely to be a series of behind-closed-doors meetings was held last Thursday.

Though the meeting was seen by many as a step in the right direction, attendees “were frustrated when no specific solutions were offered,” says Mike Casca, spokesperson for Rep. Ellison, quoting a source familiar with the meeting. “It was clear more work needs to be done between the National Security Council and relevant agencies to keep the remittances lifeline open.”