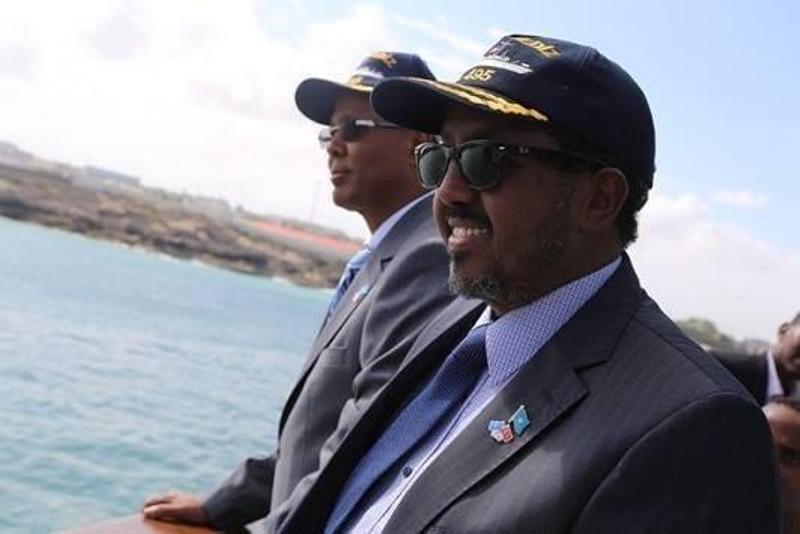 On May 5th, more than 100 parliamentarians signed a letter calling President Hassan to resign immediately. Then, on May 27, 2014, the Intern-Governmental Authority on Development (Ethiopia and Kenya), the United Nations (UN), and the European Union (EU) issued a follow up Joint Statement that ousted (President) Hassan and promoted PrimeMinister Abdiweli Sheikh Ahmed as their designated local partner.

They required the Prime Minister “to take timely and decisive action to create national unity, improve security, and expedite progress on federalism, the constitution and elections.” Some believe that this is the beginning of the end of the UN created federal government of Somalia in 2012. Inexplicably, the African Union did not join the statement.

Without doubt, the Joint Statement would accelerate the deterioration of the Somali political, security, and humanitarian situation in downturn since the beginning of this year 2014. The major factors responsible for the downturn are: (1) the relentless machinations of Ethiopia and Kenya aided and abated by the European Union against Somalia’s rebirth; and (2) the incomplete but candid assessment to f the Director of US National Intelligence Mr. James R. Clapper who outlined four major problems that eroded the credibility and effectiveness of the Federal government, but left out other three critical factors: (I) the hegemonic strategy of Kenya and Ethiopia over Somalia; (II) the major blame of donors in the persistent political infighting; (III) the fragmented authority or control of the country divided into UN blessed parts.

True, the Somali Cabinet has the collective responsibility to formulate and implement national policies on unity and security but the president retains the constitutional responsibility to assent the civil and political appointments as well as policy and legislative priorities of the Cabinet as president and Commander-In-Chief for subsequent legal decrees. More importantly, the parliament has the legislative and oversight responsibility over the executive. If the federal government has become irredeemable, the solution is not to empower a leader accused of fomenting civil wars in Gedo and Jubba regions, of divisive politics in other regions, and of capricious leadership.

The Joint Statement did not address the failure of the African Union Forces in Somalia (AMISOM) in protecting the federal government institutions from Al Shabab attacks as their primary duty for receiving billions of dollars in the past seven years. Alas, the international community bypassed the establishment of an effective Somali National Forces capable of defending their government, people, and country from internal and external enemies. The lifting of arms embargo has been an important but insufficient gesture for the absence of direct and effective support of international donors to the federal government before 2014.

The tone and direction of the Joint Statement is a serious setback for Somalia’s state-building and peacebuilding. The threat directed to those who oppose the transformation of Somalia into clan fiefdoms “under mayors,” ultimately inescapable of perpetual insecurity, poverty, disunity, and lack of state sovereignty is wrong.

In final analysis, the Joint Statement responds to the lingering question raised long time ago by Mary Harper, BBC reporter, “Who runs Somalia?” The simple answer is “IGAD, EU, and UN” are running Somalia.

The fact remains that the issues of federalism, constitution, and political elections are beyond the exclusive responsibilities of the executive, parliament, and presidency of the federal government and less of the international actors. These national issues belong to the realm of dialogue and negotiations among Somali stakeholders, legitimate representatives of all segments of the Somali society with authority and accountability.

Removal of President Hassan from Office-Abdullahi Way or Shirdon Way

The letter signed by more than 100 members of the federal parliament lists 14 charges against President Hassan. Both the Speaker of the federal parliament and the UN Special Representative of the Secretary General (SRSG) and Head of United Nations Mission for Somalia (UNSOM) Ambassador Nicholas Kay met with representatives of the group and received copies of the letter.The Prime Minister Abdiweli Sh. Ahmed remained indifferent to the crisis that threatens the survival of the federal government.

The president rebuffed the call for his resignation but welcomed to meet the MPs. As of today, the MPs did not proceed with parliamentary motion probably because of the difficulty to obtain the 183 threshold votes required to remove the president from office. It is not clear if it will end with the way former President Abdullahi Yusuf or former Prime Minister Abdi Farah Shirdon has been removed from office. The move of the parliamentarians has elicited different interpretations.

The public has low regard to the parliamentarians satirized as “call boxes or telephone cabins” for their notorious mercenary behavior and hypocrisy. The institutional failure of the parliament representing the collective will of the people is not less detrimental to the national peace, unity, sovereignty, reconciliation, independence, and statebuilding of Somalia compare to other federal institutions. Nevertheless, the action of the MPs has damaged President Hassan’s leadership.

From different perspective, it seems that the action of the MPs has been conflagrated by the tension between theVision 2016 Agendaand theNew Deal Strategycumsix pillars strategyof President Hassan. In his trimester briefing on May 22, SRSG Nicholas Kay informed the UN Security Council that “the political crisis in Mogadishu could herald a return to the cycle of deadlock and infighting between Somalia’s political institutions that has paralyzed governments since 2000.”At the same breadth, he affirmed that the president, the speaker, and the prime minister are united and working together for solution, which indicates political harmony among federal leaders.

But heatedly, he added that “the critical plan onVision 2016” drafted by his office has not been approved by the federal government. As a matter of fact, the plan which has far reaching impact on Somalia’s political unity, security, stability and credibility, needs extensive debate and discussion among Somalis inside and outside the federal government institutions before being discussed with international donors.

The review of the provisional constitution approved in 2012 after seven years and the cost of more than 60 million dollars resets the rules of the political game in Somalia. Thus, all political forces must have the transparency, opportunity, space, and sufficient time to participate in the process for renegotiating the fundamental principles of the Somali State. The hijacking of the process by the international actors will backfire.

A recently published study by Life and Peace Institute in Sweden titled “Alternatives for conflict transformation in Somalia” pointed out that “the federal government’s silence on this issue [federalism] is important and demonstrates a key issue of contention.” The study proves that Puntland position on federalism challenges the internationally supported approach on statebuilding in Somalia. Puntland disputes the existence and supremacy leadership role of the federal government as legitimate representative government of Somalia in foreign and domestic affairs. IGAD, UN and EU fuel the Puntland dispute.

One possible outcome of the foreign led “Vision 2016” exercise is to force the citizens of Somalia to commit another political suicide of fragmentation and long term instability. The international community continues to write strategies and policies good for reading, while behind the scenes imposes the implementation of abusive and controversial policies on weak and corrupt local leaders.

As an example, the Vision 2016 Framework for Actionstates that the completion of federal system should be achieved through dialogue and reasonable consensus and not by imposition or coercion. But IGAD, EU, and UN ignored the popular revolt against Addis Ababa Agreement for the creation of Jubba Interim Administration. They also falsely claim that the federal government supports the southwest state of the three regions to cover up their coercive tactics and antagonism against the Southwest State of the six regions overwhelmingly supported by the communities in the area. If these are not blatant coercion, what else coercion would be?

IGAD, EU, and UN have no sight “on real Somalia.”They claim to focus on terrorism and they deal with six separate entities as virtual Somalia–Mogadishu Federal Government, Jubba Interim Administration, Somaliland, Puntland, Galmudug, and Ahlu-Sunna-Wal-Jama. Areas under Al Shabab are no-go-zones. Last week, during a New Deal Conference held in Garowe, Puntland, the representative of the African Union asked donors to support Puntland state as separate territory while a federal government delegation attended as a “local guest.” In the context of the New Deal framework for state-building, this is a major reversal.

The UN led constitution making process which produced the provisional constitution in 2012 has put Somalia into constitutional and statebuilding conundrum. The same mistake should not be repeated. Clear understanding about the integration of the country is a precondition for a constitutional review.

The Future of theFederal Government

The end of the transition period followed immediately by the adoption of the New Deal Strategy for Somalia and US diplomatic recognition, all reaffirming the unity, sovereignty, territorial integrity and political independence of Somalia did not go well with the promoters of clan building blocks or hybrid governance. Initially, the Federal Government started to claim its sovereignty and pushed back aggressive foreign interferences. But it failed to practice a proactive planning and implementation of coherent foreign and domestic policies to be carried out consistently and effectively. The anti-Somali statebuilding forces have mobilized to attack the Federal government on issues like clan federalism, corruption, Kenya initiative in Jubba regions, and the lifting of the arms embargo.

In reaction, President Hassan and his inner circle changed positions without deliberative political process within the cabinet and decided to surrender to the opponents of Somalia’s state-building. However, the change of position did not improve the political fortune of the federal government and President Hassan’s team.

The missteps and flip-flops of President Hassan did not square with his political platform, public statements, and long term experience as civil society activist. He had fair understanding about the enormous problems and powerful forces plotting against Somalia domestically and externally. There are those who initially believed that President Hassan genuinely wanted to restore a democratic sovereign state of Somalia based on political independence, fairness, equality, unity, rule of law, and shared burden, while others believed from the beginning that he was an accidental leader who did not have presidential leadership qualities and vision but was elected after paying to the parliamentarians huge sums of money provided by backers who wanted to gain power through allegiances and corruption. The skeptics were elated by James R. Clapper’s assessment on President Hassan’s weak leadership.

However, the perception tends to be that President Hassan chose to trade major political goals and leadership legacy with short term interests and now his strategy of survival could ruin the future of Somalia. Such eventuality could engender new political dynamics that will halt the statebuilding and peacebuilding efforts in Somalia and open space for multiple negative forces. The future of the federal government is doubtful.

Do the following maxims ring bells to all Somali Leaders and Elite?

First, President Museveni of Uganda said to his people, “I have never called the United Nations to guard your security. Me, Yoweri Museveni to say that I have failed to protect my people and I call in the UN…I would rather hang myself……It would be a vote of no confidence to our country and citizens if we can’t guarantee our security, what kind of persons would we be?”

Second, President Obama said “Wehave to recognize Afghanistan will not be a perfect place and it is not America’s responsibility to make it one. The future of Afghanistan must be decided by Afghans.”