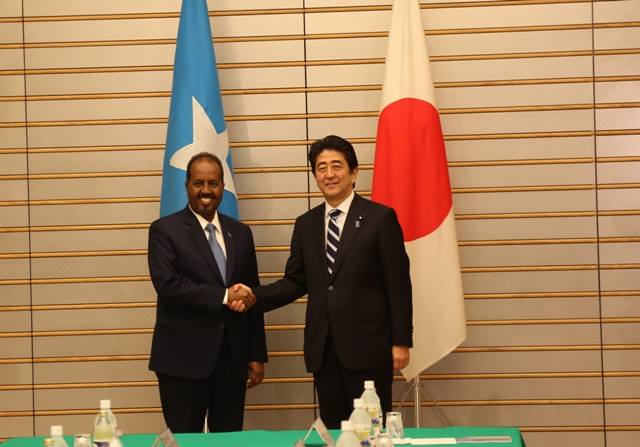 Meeting in Tokyo to discuss a wide range of bilateral issues focusing on development and humanitarian assistance, the two leaders held a joint press conference in which they explained the scope and ambition of Japan’s aid programme.

The President said: “Japan clearly recognizes that Somalia is an important country in terms of regional and international peace and security. As part of its generous partnership with Somalia, it is planning to provide assistance that will benefit each and every Somali citizen. The latest package will be worth around $40 million and will be targeted at humanitarian assistance in food aid and healthcare, support to the Somali police and in job creation more widely.”

The President thanked Prime Minister Abe for his invitation to Japan and the warm reception extended to his delegation and paid tribute to the government and people of Japan for standing by Somalia, whose people are now recovering from a long civil war.

The President said: “We are moving rapidly into a period of recovery and development and I salute Japan for intensifying its bilateral programme of assistance which will, we hope, include vocational training for youth and women, fisheries and agriculture infrastructure development, information and communication technology support and maritime and fisheries training.”

During his Tokyo programme the President also visited the Japanese Senate where he was briefed on its legislative functions and its place in the country’s political architecture. Somalia is asking Japan for help establishing an upper legislative house as outlined in the draft constitution.