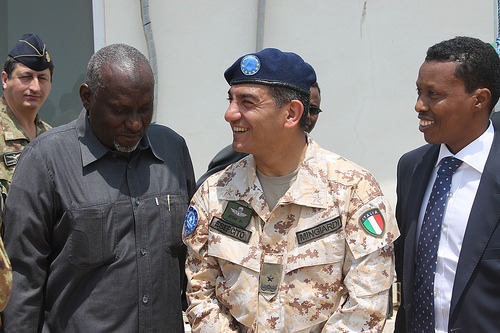 Mogadishu (HAN) March 3, 2015 – Regional Defense and Security news. The outgoing commander of the European Union Training Mission (EUTM) in Somalia, Brigadier General Massimo Mingiardi, says the mission will fail to achieve its objectives of setting up, training and equiping a professional Somali National Army (SNA) unless the US and European Union make the long term funding commitment needed to achieve the mission’s objectives.

The Somali army over the past few years but there remains a possibility of failure due to a lack of long term commitments from the principal programme contributors:

“I have been satisfied with the results so far but they are not enough..It would be very naïve to say we could have solved the problems of Somalia in the last year – not after 22 years of civil war.

“We are on a good track but the West needs a long-term commitment. Otherwise, or else we will commit the same mistakes made in other parts of Africa (Libya, Sudan) or the Middle East (Syria, Iraq),” he said.

Brigadier General Massimo Mingiardi, added his statement this week that, the training programme faces severe shortages of basic training equipment while the continued absence of proper barracks, military uniforms and central authority in the form of a Ministry of Defence severely hampers the work of the mission and compromises its outcomes.

“If we want to see any improvement, the only path before us is to provide them the equipment they need for training as well. We’re also trying to help the Somalis rebuild their Ministry of Defence, but without more money I don’t think we can achieve the desired results. One of my first priorities would be to re-build barracks, which would enable the soldiers to better control the armoury,” the Italian Army general said.

The commander wants the EUR2.5 million pledged to the EUTM this year to be used for the acquisition of non-lethal military supplies such as camouflage uniforms and the construction of barracks and other cantonments.

Brigadier General Massimo Mingiardi said this will improve the morale and basic living standards of the newly trained soldiers. The EUTM was set up in 2011 to support the rebuilding of a Somali army after the installation of a new UN-backed government in Mogadishu.