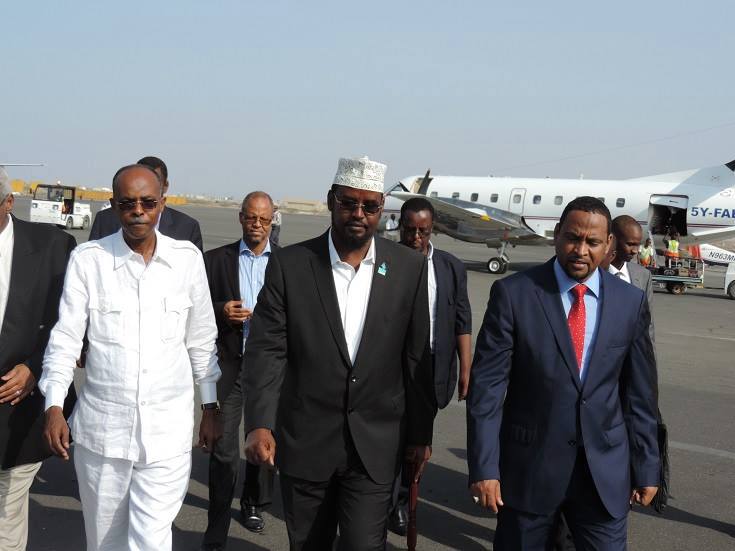 Mogadishu (HAN) May 19, 2014. HAN & Geeska Afrika Online weekly security update briefing. Another major Al-shabaab  terrorist event in Kenya is probably the most likely and dangerous event that could occur in the next  months, according to Kenyan intelligence agents. Al-Shabaab has become far more aggressive in Kenya since Abu-zubair (Ahmed Abdi Godane) consolidated power within the elite units of Al-shabaab in Southern Somalia, including Puntland. Al-Shabaab releases videos addressing Muslim conflict in global context; unidentified gunmen kill Ahlu Sunna official in Gedo region; SNA forces clash with al Shabaab militants in Lower Shabelle region; ONLF in Eritrea office  accuses Djibouti of collaborating with Ethiopia in the detention of thirty ONLF fighters as a refugees.

“For the next view weeks, the phone networks will be cut so no one can speak in Barawe area – they will cut off from the rest of the region, which frightens me,” said Mumin Warfaa, a member of the business community in Mogadishu, through a satellite phone, will be the only option in Barawa next month, since AMISOM are preparing a final attack against Barawa city. He said. “Everyone is on edge. We have no idea what will happen next month in Barawa.”

Al-Shabaab want the Kenyan government to withdraw its troops from Kismayo. They are there as part of  AMISOM (an African Union peace-keeping mission). A senior security source told Geeska Afrika Online: “Our people are not in a fighting role. “They are there to mentor and deliver information, training and tactics which allow the Kenyan forces to make more informed decisions about how they operate against al-Shabaab.”

Kenya:  Travel firms Thompson and First Choice brought more than 500 Brits home after the Foreign Office warned of a plot to target westerners. They have now cancelled all flights to the east African country until at least October. Terror group Al-Shabaab, which killed 67 in last year’s attack on Kenya’s Westgate shopping centre, have been blamed for the latest atrocity. UK special forces including the SAS are working alongside American and Kenyan troops on the border with Somalia. SAS men have been based in northern Kenya for more than five years as part of a training agreement. The British intelligence community in the region  use electronic surveillance to spot insurgents smuggling weapons and explosives into Kenya.

A senior British military source Army Light Electronic Warfare Teams can listen in on phone calls and jam communications. The terror attack “chatter” was intercepted in the past week and a warning sent to the British Embassy, which was passed to London.

Somalia (Puntland) pirates’ boat: Al-Shabaab Funds Halted After 450kg of Heroin Seized from Somali Pirates by Australia Warship. An Australian warship has seized 450 kilogrammes of heroin worth £78m ($125m) from a Somali pirates’ boat, nullifying funds destined for al Qaeda. According to news agency AFP, HMAS Darwin was patrolling the Indian Ocean some 40 nautical miles off Somalia’s east coast, when it intercepted the suspicious haul. The drugs were hidden in 20 bags, each weighing between 20 to 25 kg each. The ship’s commander Terry Morrison said the seizure “removed a major source of funding for terrorist and criminal networks which included al Qaeda, the Taliban and al Shabaab.

Djibouti: Both Addis Ababa and Djibouti have taken robust security measures to ensure the safety of their populations and western guests. Attacks are difficult to conduct but not impossible. Despite the general perception of al-Shabaab being the primary threat in the Horn of Africa, al-Qaida in the Arabian Peninsula (AQAP) could also target the U.S. forces in Djibouti.

Ethiopia: Al Shabaab militants ambushed an Ethiopian AMISOM and SNA convoy on the road between Baidoa and Burhakaba in Bay region on May 12. Al Shabaab claimed that the militants seized a vehicle and captured an SNA soldier during the ambush. Somali government officials acknowledged the incident but denied al Shabaab’s claim, asserting instead that AMISOM and SNA forces repelled the attack.

Somalia: (Baidoa): A suicide vehicle-borne improvised explosive device detonated near a caffe in Baidoa in Bay region on May 12. The attack is suspected to have targeted Abdi Fatah Gesey, a former governor of Bay region, who was in a bank near the café at the time of the explosion. Although Gesey was uninjured, at least 12 people were killed and twenty more injured in the blast, including both civilians and Somali government forces. Although no group has yet claimed responsibility for the attack, al Shabaab specifically threatened former Somali government officials when claiming responsibility for a May 3 blast that killed a Somali police official.

Somalia (Mogadishu): Somali government forces conducted security operations along the Warshadaha road in the Daynile district of Mogadishu on May 13. The government forces halted public transportation and arrested an unspecified number of people during the operation, which was reportedly prompted by information citing specific security threats in the district.