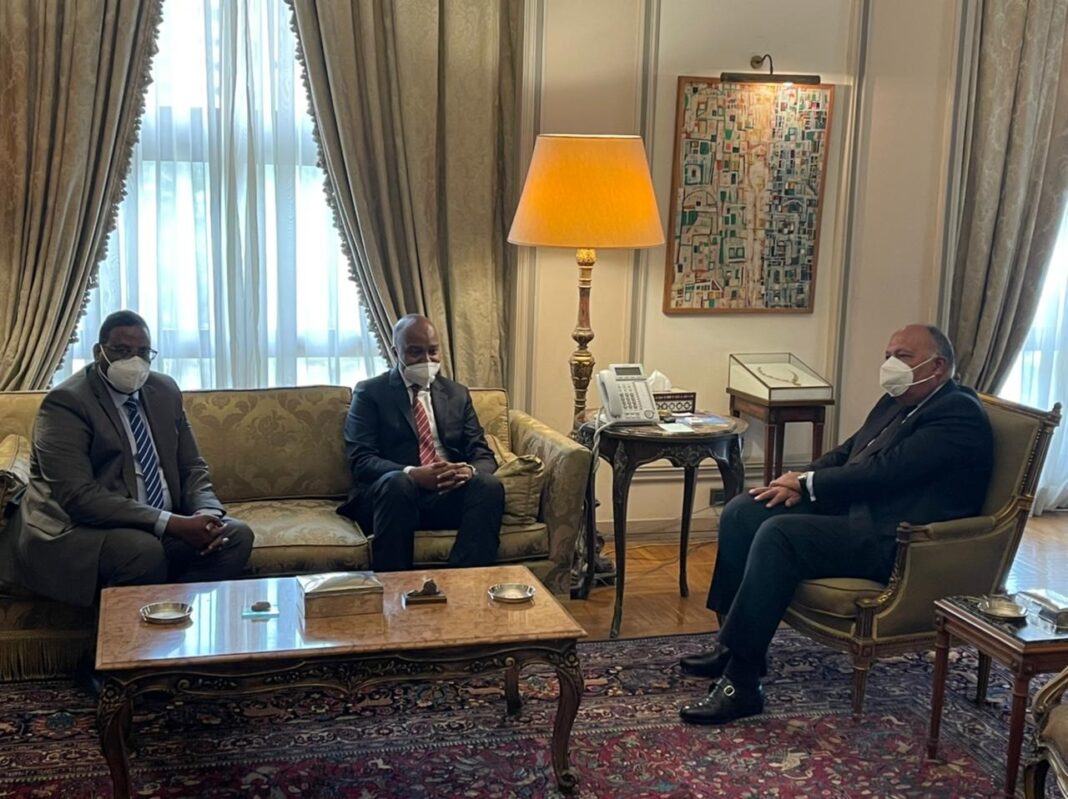 Egypt is seeking to repair its relations with Somalia amid the ongoing crisis over the Ethiopia dam in the Nile River and Turkey’s growing influence in the African country.

The Somali delegation began its visit by meeting with Foreign Minister Foreign Minister Sameh Shoukry  to discuss “the developments in horn of Africa, the regional situation in neighboring countries and its repercussions on stability and security in the Horn, as well as ways to promote bilateral relations between the two countries.

On Dec. 7, the Egyptian delegation participated in the opening of the Somali Partnership Forum.

Rokha Hassan, member of the Egyptian Council for Foreign Affairs said that the visit reflects Egypt’s desire to boost its ties with Somalia, as the two countries enjoy good historical relations dating back to before Somalia’s independence in 1960. Cairo also established schools there and sent educational and Azhari missions to the country, he added.

“But as the Somali civil war became more heated at the beginning of the 1990s and with the instability there, ties between the two countries were at a stalemate, and the Egyptian Embassy, ​​along with other foreign embassies, was attacked at that time. The headquarters of the Egyptian ambassador was moved to Nairobi in Kenya for his security and safety. Their relations have fluctuated ever since,” Hassan said.

Hassan considered the May incident an “urgent situation resulting from a Somali misunderstanding that needed Egypt’s clarification and explanation that communicating with the Puntland region aimed at trade exchange and nothing else.”

He stressed that Egypt supports the unity of Somalia and seeks to achieve stability, development and reconstruction there.

What is more, in March, Mogadishu did not support Cairo when it rejected a draft resolution presented by the Arab League condemning any unilateral measures that Ethiopia has been taking in the Grand Ethiopian Renaissance Dam (GERD).

Mukhtar Ghobashy, deputy head of the Arab Center for Political Studies, linked the visit of the diplomatic delegation to the Egyptian action in Africa under the rule of President Abdel Fattah al-Sisi. He told Al-Monitor that the visit reflects Egypt’s endeavors to play a greater role in Somalia with the aim of mobilizing technical support in the GERD issue on the one hand and to confront Turkish infiltration on the other.

Since Sisi rose to power in 2014, the Egyptian policy toward Africa has changed following the damage it suffered due to its absence from the African Union since the failed assassination attempt of former Egyptian President Hosni Mubarak in Addis Ababa in 1995. Egypt is now seeking to improve its image in Africa, protect its interests and strengthen its position in the GERD issue.

Ghobashy said, “The Egyptian action in Africa focuses mainly on the GERD issue. Yet Egypt is concerned about another issue in Somalia, which is the massive and frightening Turkish infiltration into its territory.”

Three days before the visit of the Egyptian delegation, Abdirizak met Dec. 3 with Turkey’s ambassador in Mogadishu, Muhammad Yilmaz. Abdirizak said, “Turkey has consistently stood by us. Turkey offers us military assistance, development aid and had provided immediate #COVID19 response.”

Hassan commented, “Unfortunately, in recent years, countries such as Turkey were able to infiltrate into Somalia by providing aid, until they managed to establish a military focal point (base) in Mogadishu in 2017. Consequently, Egypt had to boost its relations with Somalia to strike the needed balance.”

Ghobashy said the Egyptian delegation may have discussed during its visit to Somalia the establishment of an Egyptian military base in Mogadishu. He explained that Somalia is facing a major challenge with the rise of al-Shabab, which is affiliated with the Islamic State and al-Qaeda. Perhaps Egypt is offering its expertise in confronting such extremist organizations, he said.

Meanwhile, the Egyptian armed forces welcomed on Dec. 6 a delegation of the Horseed Football Club, owned by the Somali army, which was taking part in the Confederation Cup. The army provided training venues and health services to the Somali team throughout its stay in Egypt.

Omar Mahmoud, chief analyst for the Somalia file at the International Crisis Group, said the Egyptian delegation’s visit comes at a sensitive time for Somalia, as presidential and parliamentary elections are imminent and many international partners are visiting it to assess the situation.

Mahmoud told A-Monitor, “I am not sure to what extent Egypt’s relationship with Somalia has changed during Sisi’s era.” Still, Mahmoud stressed that Egypt wants to maintain its contacts with Somalia as a way to keep a foothold in the Horn of Africa in the context of its ongoing conflict with Ethiopia over the GERD.

Egypt, Ethiopia and Sudan have been engaged in arduous negotiations with Ethiopia over the GERD for a decade, with the aim to reach an agreement on the operation and filling of the dam, which Egypt considers an existential threat to its water security.

Mahmoud said, “The GERD crisis has put Somalia in a difficult position due to its relationship with Ethiopia and Egypt, and Somalia tried to present itself as a mediator at some point. However, it does not seem that either side took this seriously.”

Mahmoud concluded, “Framing Somali relations in the context of wider rivalries is a destructive strategy for all parties. Somalia should not be an arena for competition between opponents.”