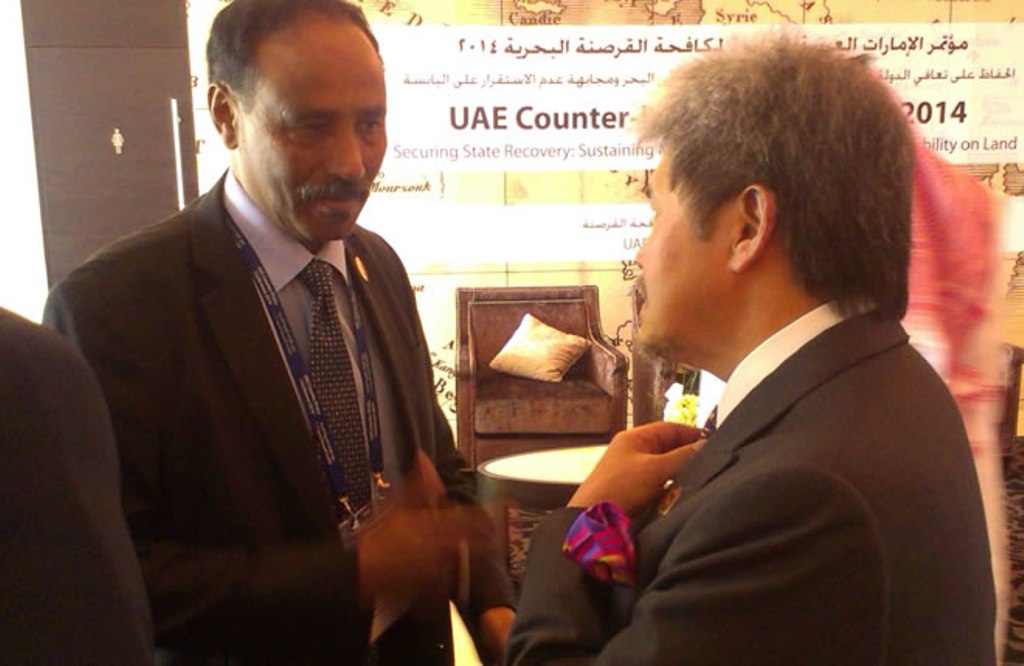 The meeting which was organised and co-chaired by the Ministry of Foreign Affairs of the UAE and global marine terminal operator DP World, brought together Counter-Piracy experts from across the world including government Ministers, armed forces personnel as well as academics to discuss the progress and challenges of tackling piracy across the world, including off the coast of Somalia.

The conference was opened by Shaikh Abdullah Bin Zayed Al Nahyan, the UAE Foreign Minister, who passionately spoke of tackling the root causes of piracy off the coast of Somalia through the strengthening of local governments and building local capacity to address it earlier on in the process. Despite the decline in incidents of pirate attacks of the coast off Somalia since 2012, Shaikh Abdullah Bin Zayed Al Nahyan warned against complacency on the part of the international partners working with the Somali government to end this costly maritime crime.

“This remarkable success is testimony to the effectiveness of international counter-piracy cooperation in the Horn of Africa. Despite recent successes, there is no room for complacency. Although incidents of piracy have plummeted, other forms of crime on the high seas are on the rise. These include illegal fishing, human trafficking, the smuggling of arms and drugs, and armed robbery. The threats to regional security posed by these crimes amount to those of terrorist acts. And they are becoming difficult to control and contain,” said Shaikh Abdullah.

Dr. Abdirahman Dualeh Beileh immediately followed his UAE counterpart to deliver his key note address which also focused on tackling the root causes of piracy within the affected communities in order to end it on a permanent basis. Dr. Beileh spoke of Somalia’s proud history, his government’s intolerance of criminality, of which piracy is one, and the efforts been made in partnership with the international community to tackle piracy by the Somali government.

Dr. Beileh acknowledged the cost of Somali piracy to international trade globally but he also pointed out that the forgotten victims have been the people that reside in the affected coastal communities and the reputation of his nation.

“At the national level, these pirates have stigmatised and victimised local communities and in international circles, tarnished Somalia and its good people’s image,” said the Minister.

Minister Beileh reminded the audience of distinguished guests that Piracy is a new phenomenon in Somalia as Somalis were pastoralists who had seldom before looked to their vast and rich sea for livelihoods.

“Piracy is a new comer to the shores of Somalia and to the Somali people. In fact, with their love for livestock (camel, cattle and sheep, Somalis never looked to their massive oceans and seas for livelihood,” said Dr. Beileh. However, now that some have with criminal intent, the Minister said all efforts must be made to tackle it wherever it is through hope and alternative opportunities and not just trials and imprisonment on their own.

Minister Beileh made clear that offering alternative livelihoods through education, training and employment for the youth who make up about 70% of the Somalia population and the bulk of recruits for exploitative pirate recruiters, is the best means of disrupting the pirates operations and providing communities with hope.   The Minister went on to ask the international community to support the Somali government’s Give Your Gun and Go to School (GYGGS) program which aims to do just this across the country.

“Young people without purpose and legal alternative opportunities can be very dangerous. In Somalia and most other conflict countries across the world, it is young people that are used to fight and are dying in unbearably large numbers. In the case of Piracy, it is again young people at the forefront,” said Minister Beileh.

Minister Beileh concluded his speech by reiterating that, “Piracy is evil, illegal, dangerous, and must be put to stop.” However, this would need real focus, on the part of the Somali government and its partners in the international community, on offering alternative livelihoods, redoubling efforts to bring peace, security and stability as well as “helping Somalia build strong coast guard and capacity building relevant structures of government.”

The president of Somalia, Hassan Sheikh Mohamud, who was unable to make it for the opening day of the anti-piracy conference due to other vital diplomatic engagements in Mogadishu, arrived in Dubai last night in order to deliver the closing remarks this afternoon.

Sources: The Somali Minister for Foreign Affairs and Investment Promotion