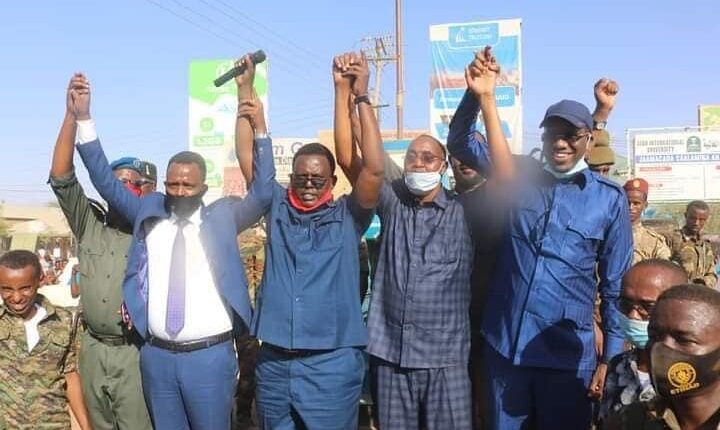 MOGADISHU (HAN) March 25. 2021. Public Diplomacy and Regional Stability Initiatives News. Monitoring Regional Issues. By Manase Otsialo. A fugitive Jubbaland minister has surrendered to the Mogadishu government bringing relief to northern Kenyan residents who have in the recent past said he was a security threat to them.

Mr Abdirashid Hassan Abdinur alias Abdirashid Janan has since been fired as the security minister by President Mohamed Madobe of Somalia’s Jubbaland State after it emerged that he was secretly talking to Mogadishu.

“If what we are hearing is true then our business will run uninterrupted between Mandera, Kismayu [Jubbaland capital] and other towns neighbouring Kenya,” said Mr Hassan Abdinur, a resident of Kenya’s Mandera County.

According to Mr Abdinur, the runaway minister has caused more than enough harm in Mandera.

“Having him sacked or even being hosted by Mogadishu is God sent, we have known no peace for the past two years,” he claimed.

Mr Janan crossed into Mandera in December 2019 after escaping from a Mogadishu jail where he faced criminal charges.

A section of security officers that had crossed into Mandera with him clashed with the Somalia National Army in March 2020, a fight that affected Mandera town.

A year later, the Federal Government of Somalia sent in more military officers and another fight broke out. It was during the January clash that Mr Janan lost a majority of his soldiers to the army.

Most of the fighters loyal to the fugitive minister were arrested while others surrendered.

“This wanted minister has been weakened at the moment and the only option for him was to surrender,” said Mr Ali Hassan, a resident of Bulahawa in Somalia.

According to Mr Hassan, the sacked minister used proxies and his clan elders to strike a deal with President Mohamed Abdullahi Farmaajo.

“It remains unclear if this is a trap but with the elders being involved then it is a sign that the minister could be at peace,” he said.

In Mandera, Mr Janan’s Kapedo camp was yet to be closed despite the reported developments.

“We are waiting to see what will happen to his soldiers but most definitely they will cross into Bulahawa to join the FGS security camps,” said Mr Abdi Abukar.