Home frontpage Somalia: Financial Briefing to Oversee the Smooth Running of the State... 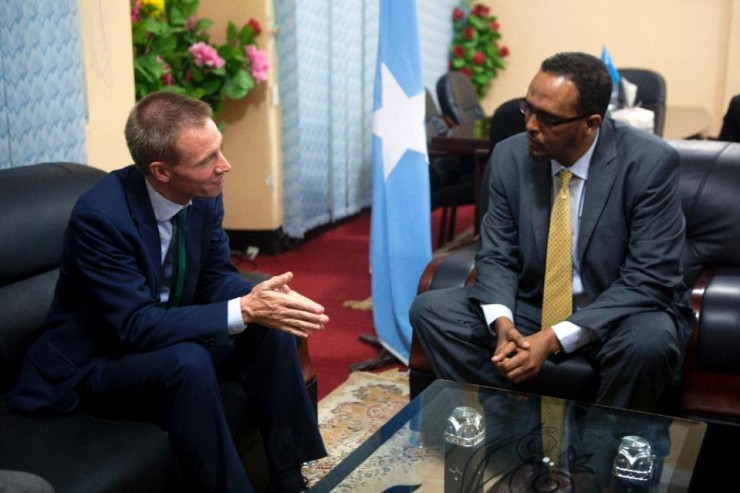 Mogadishu (HAN) June 6, 2015 – Weekly Financial Briefing to Update Public funding and Regional Security News.  The Somalia Deputy Prime Minister Mohamed Arte Ghalib has met with top government Financial Management committee which is tasked to oversee the smooth running of the state finances. The committee which is parallel to that of IMF and World Bank backed Joint Financial Management consists of Finance Minister, Central Bank governor, top financial advisers, state minister for finance in the office of the prime minister, the auditor general and the attorney general.

“We would like to rearrange the management of finances, we would like to face it in a new way, and it’s very productive as we are seeking to get real accountability , this system of financial regulation is aimed at achieving the 2016 vision” said the deputy prime minister.

Arte also pointed out the government has employed a world bank funded electronic system known as FMIS which captures the data about the income and records expenses to avoid corruption and misappropriation of funds “The FMIS system is now implemented in the finance ministry, the central bank, in the port and in the airport” said the deputy PM. The government is also planning to implement the system in all ministries at the end of this year. This meeting came as the cabinet is tightening its grip on the financial matters as it faces budgetary issues.
The Steering Committee of the Somalia Development and Reconstruction Facility (SDRF SC) met on 7th May 2015 in a plenary format. The meeting was followed by a short meeting of the committee in its executive format to review the programmes submitted to the UN Multi Partner Trust Fund (UNMPTF) and the World Bank Multi Partner Fund (MPF) for endorsement.

Development Partner Meeting in Nairobi, Kenya: The Deputy Prime Minister led a Somali delegation to meet with development with partners in Nairobi. The purpose of the meeting was for the government to strengthen leadership by highlighting priorities and for donors to present the areas they invest in Somalia.

The meeting was initiated by the DPM welcoming attendees and presenting an overall snap shot of government priorities through the Peace and State Building goals. The snap shot paved the way for Ministers: Finance, Internal Security, Education and Deputy Minister of Planning to thoroughly explain the work being undertook in their ministries with development partners. The World Bank and UNDP followed with presentations of the funding windows.

The funding windows were presented with Q&A session donors presented the amount they contribute to Somalia with reference to sectors. (These short presentations can prove useful for the next round of aid mapping). Decision was made to form a short task force leading the preparation for the mid-term review. (This mid-term review will evaluate the first half of 2015 and be presented at the next HLPF).

Ongoing AIMS Review Report: After the facilitation of AIMS workshop on 9th of April 2015 in ‎Mogadishu‬ by Aid Coordination and the review of the progress the consultants made towards the set out objectives, the World Bank has send preliminary report for government review and input in May 2015. Further discussion will continue and Aid Coordination Unit will ensure the progress and the developed recommendations are aligned with FGS priorities.

The meeting was held to present the findings of the World Bank and United Nations research into security and justice expenditure and crucially the sustainability of this for the nation as requested by the Ministry of Finance.

1. Understanding other security challenges the state must address beyond the insurgency
2. What role do formal justice institutions plan in the response
3. How sustainable are spending patterns in context of domestic revenue and international experiences
4. What mechanisms are in place to support functional and financial accountability

The WB and UN collected information from appropriate government ministries to build the big picture around security and justice costs on the public wallet and draw some comparisons with other fragile states.

A number of ministers have already been briefed on the finds, along with regional representatives (IJA, PL, Galmudug, and ISWA). A more accurate presentation will again be delivered in the coming PSG 2 meetings.

SJ PER stocktaking exercise is designed to support policy and decision makers in FGS make better informed decisions based on the public revenues, international flows, analyze future sources of conflict and appropriate responses and the affordability of such responses.

PSG1 Meeting on 20-21 May: State Minister of Interior & Federal Affairs (FGS) held the opening remarks of PSG 1 meeting on 20th, 21st May in Mogadishu. The State Minister made short briefings and updated the participants and donors the progress and achievement of different sub working groups of PSG1( State Formation, Constitutional Review and Elections).

State formation is one of the key important activities of PSG 1 as it outlined its Actions Plans and Milestones. The State Minister explained the progress and activities that Federal Government has covered in the previous month and highlighted key achievements.

The State Minister for Interior and Federal Affairs explained the process of national independent electoral Commission Formation and haw the selection criteria and process was made. More 300 hundred applicant applied and eventually 27 were selected 27 out 300 hundred and summited to the cabinet. After long discussion at the cabinet, they endorsed the nine members that will be the official members of the national independent electoral Commissions.

PSG 4 meeting was held for three days in May. The agenda was as follows.

Presentation on the “Operations Manual for SDRF Funding Windows” and “Key PSG WG deliverables for 2015” by ACU. Presentation on Women’s Economic Empowerment by the Ministry of Women and Human Rights Development and UN Women. Re-introduction of the Joint Programme on Sustainable Charcoal Production and Alternative Livelihoods (PROSCAL) by Ministry of Livestock, Forestry and Range.

SWG group work on Action Plans, incl. Milestones for 2015 and 2016, as well as other issues. Presentation on Somalia Core Economic Institutions and Opportunities Programme (SCORE) for strategic review. Presentation on AfDB Infrastructure Fund. Discussion on options for the energy sector with contributions from WB, AfDB, and FGS. SGW discussions on SCORE and on options for the energy sector. Presentation of the Interim Poverty Reduction Strategy (IPRSP) by Ministry of Planning and International Cooperation. Reporting back from SWGs on Action Plan, incl. Milestones for 2015 and 2016.

Staff Training: Two training sessions were done for ACU staff in the May. The first session was on Gender Equality as it relates to development in particular Somali Development. Both of these sessions were held in close collaboration with UNDP. The second session was on SDRF which was done with close collaboration with Ministry of Finance FGS/UNDP. The sessions were held to further strengthen the capacity of the ACU and integrate the work of the ACU with its current activities. Further training are planned in the month of June 2015.