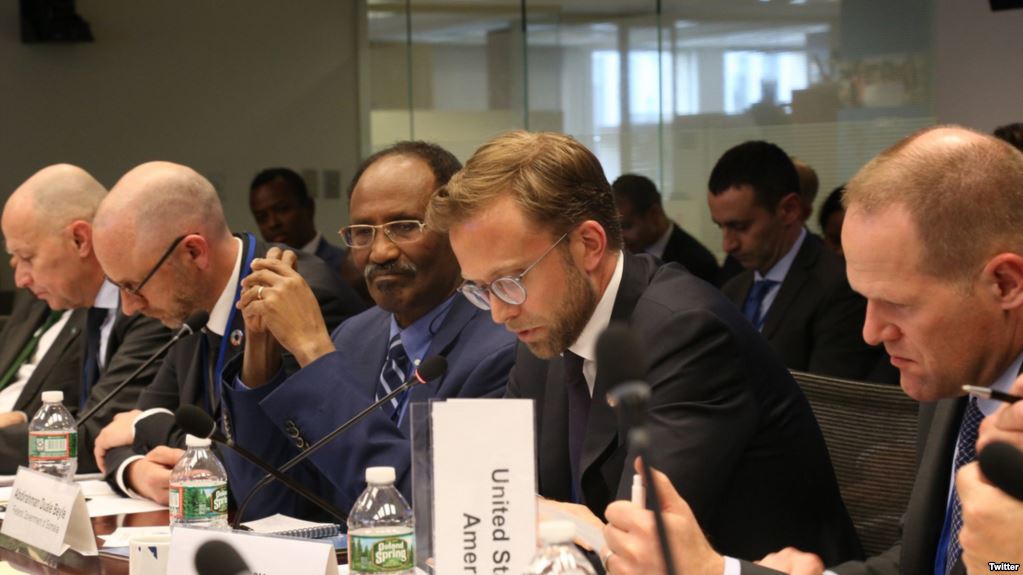 New York (HAN) December 28, 2018. Global Financial and monitory Systems Opinion “Somali Officials Misrepresent IMF Statements and Reports” Sent to Geeska Africa Online by Dr. Mohamud M Uluso (Former Presidential Candidate 2017). Somalia suffers from the disgraceful culture of leaders and politicians invoking deceptively legitimate documents like the Provisional Constitution for bolstering false claims and arguments or for obfuscating critical search for truth. That culture has undermined the requirement of truth, good faith, and accountability in the public life and dashed the public hope for democratic state of Somalia governed by the rule of law and democratic values.

Under such culture, federal government officials responsible on financial and economic affairs are frequently citing press statements or reports of the International Monetary Fund (IMF) staff as evidence supporting their claims of integrity and good performance in public financial management and economic accomplishments. Those officials are fully aware that their offices did not provide comprehensive official account on budget execution in 2017 and 2018 (past 10 months), accumulated arrears, off budget revenues, foreign aid shortfalls. Also, they did not respond to allegations of misuse of Saudi Arabia funds, fishing contracts with Chinese company, monthly secret cash transfer from Qatar Government, and pervasive mismanagement of Mogadishu local government finances. The 2018 report of Financial Governance Committee (FGC) chaired by the Minister of Finance affirms, “The majority of the expenditures submitted by FGS at the end of 2017 for reimbursement under the non-salary component of the World Bank Recurrent Cost Reform Financing (RCRF) facility were deemed ineligible as agencies had failed to adhere to the required procurement processes.”

The first paragraph of the  press statement released on December 10, 2018 by Mohamed H. Elhage, team leader of IMF staff mission says, “the views expressed in this statement are those of the IMF Staff and do not necessarily represent the views of the IMF’ Executive Board. This mission will not result in a Board discussion.” From this, it should be clear that the informal agreement of Staff-Monitored Program (SMP) between Somali officials and IMF staff should be used in its limited sense. The SMP serves to establish track record of the government behavior on implementation of economic policy reform and on governance.

Meanwhile: By the end of 2016, the implementation of SMP I was satisfactory. IMF Executive Board of Directors commended “the [Somali] authorities for the significant progress made in rebuilding the economy and restoring key economic and financial institutions in a difficult political and security environment.” That language has not been beaten after 2 years. The Somali officials should be embarrassed by the fact that they meet IMF staff in Nairobi, Kenya because the latter can’t visit the country since 2013 for security reasons.

The cited press statement predicts the failure of achieving the projected 2018 GDP growth of 3.1 % and Inflation rate of 3.5 % because of the fall of the international support. This happens after the unfulfilled projection of 2017 GDP growth rate of 2.3 % and inflation rate 5.5 %. Two consecutive years of low or negative GDP growth worsens the poverty condition of the country.

The Federal Government failed to tackle from inauguration the impediments to peacebuilding and statebuilding agenda extensively explained in SMPs, FGC report, 2017 London Partnership agreements and Security Pact. To the bewilderment of the majority, it chose to attack the Federal Member States and to disregard the rule of law, justice, respect of freedom of expression, assembly and movements, free and fair election, and respect of human rights, checks and balance, and accountability, by using violence, intimidation, and corruption. The international partners of the federal government – the UN, US, UK, EU, and AU – seem complacent about the destructive actions of a “triumvirate” who monopolized the state power to destroy the nascent democratic system of governance. Apparently, in Somalia, there is a shift from pro-democracy support to pro-autocracy support.

The IMF staff statement specifically demands the approval of the Targeted Financial Sanctions Law and capacity development at the Financial Reporting Center (FRC) to safeguard the inflow of remittance in Somalia. It also stresses the acceleration of the financial sector reform, particularly strengthening the licensing and supervision department of the Central Bank of Somalia (CBS), and regulating the mobile money sector. The pace for Public Financial Management (PFM) reform is still disappointing.

The IMF has offered the largest technical assistance to Somalia in the area of fiscal and monetary policy reform, and institutional capacity building. Unfortunately, poor leadership, corruption and civil servants attrition, lack of transparency and debate within federal institutions have impaired the impact of SMP programs. To implement the wide-ranging elements of the SMPs, Somalia needs visionary, law-abiding, competent, and righteous leadership.

Many SMPs will follow the end of SMP III in mid-2019 to achieve debt relief eligibility under the Initiative of Highly Indebted Poor Countries (HIPC). The international support is declining at a time Somalia needs strong support from creditors and donors for debt relief. Another hurdle to consider, IMF lacks the resources needed to cover Somalia’s debt relief if Somalia becomes eligible sometime in the future.

The IMF staff supports from behind two initiatives pursued by the federal government: the currency printing and the preparation of Ninth National Development Plan (NDP9) for 2020-2024 which overlaps the Interim Poverty Reduction Strategy Paper (I-PRSP) required for debt relief process. The 1st phase of the currency reform will focus on printing only 1,000 banknote Somali Shilling. Not only lack of fund for currency printing but also lack of independence and weak institutional capacity of the CBS and confusion around the federal system would be major obstacles to currency reform and macroeconomic management in general.

The two positive words for the federal government in the IMF staff statement are: 1. the 8 million dollar excess over the estimated first 8 month domestic revenue of 2018; 2. the rhetorical commitment of the federal government to SMP implementation. However, there is a huge gap between the long list of urgently needed reforms to be fulfilled in 4 year tem and the current sluggish performance of the federal government despite the largest IMF technical assistance. The march towards peacebuilding and statebuilding is halted by the aggressive obsession with 2020/2021 reelection agenda, including the paralysis of the constitutional institutions for accountability and respect of the rule of law.