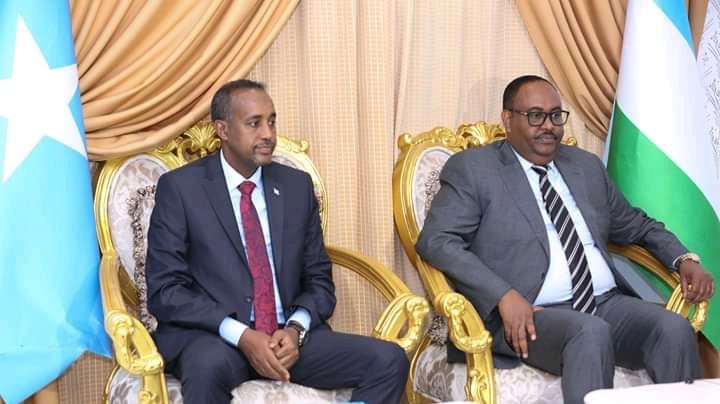 Garowe (HAN) 14 December 2020. Regional Security and Election platform initiates. The shuttle diplomacy attempts by Prime Minister Mohamed Hussein Roble to resolve the ongoing electoral issues  with Puntland state’s new election road map has ended a major obstacle initiated by the regional leaders.  President Abdullahi Said Deni blocks PMs initiatives to negotiate and set-out conditions for participating in the national federal electoral process. The meeting which was the first major assignment for the Somali PM Roble whose term in office is fast running out came. The  tough stance by Jubaland and Puntland states have given the Federal Government a cyclical headache to proceed the targeted election timetable. According to sources, Deni presented to the prime minister Roble three demands before he could appoint a regional State Interim Elections Team (SIET).

The 1st demand: President Deni vouched for his political ally Ahmed Madobe calling for the withdrawal of federal troops deployed by President Mohamed Abdullahi Mohamed ‘Farmajo’ early in the year in the Gedo region. Ahmed Madobe of Jubaland has made the withdrawal a condition for elections to take place in Gedo and by extension declined to name Jubaland’s SIET. South West, Galmudug and Hir-Shabelle states, all of which are led by presidents who enjoy good relations with the federal government have since named their respective electoral teams.

In what could expose Deni for doublespeak, he called on Farmajo to recompose the federal level elections team (FIET) echoing calls by opposition groups and civil society which have both decried the FIET appointment as ‘compromised’. They contend that Farmajo has appointed security chiefs, intelligence officials and senior civil servants to the team. A caucus of 14 presidential candidates meeting in Mogadishu late last month also pointed fingers at Puntland and Jubaland for fidelity to Farmajo’s script in appointing their SIET teams.

Saturday talks in Garowe, Deni  demanded the Federal Government reconstitutes the Somaliland SIET which has become an issue of contention also by opposition groups. Senate speaker Abdi Hashi has since appointed a parallel team for Somaliland but as things stand, Farmaajo, who has the resources and wherewithal has gone ahead to retain his teams.

The failure by the Somali PM Mr. Roble to reach a deal with president Deni of puntland would mean another failure with Jubaland, since  the two regional states respectively are jointly against Mogadishu government. Elections of MPs were to start December 10th, 2020 while that of Senators were to conclude the same day having kicked off on December 1st, 2020  according to an electoral time table drawn by Farmaajo and FMS leaders in Mogadishu last September 2020. sources   HAN reporter in Mogadishu.