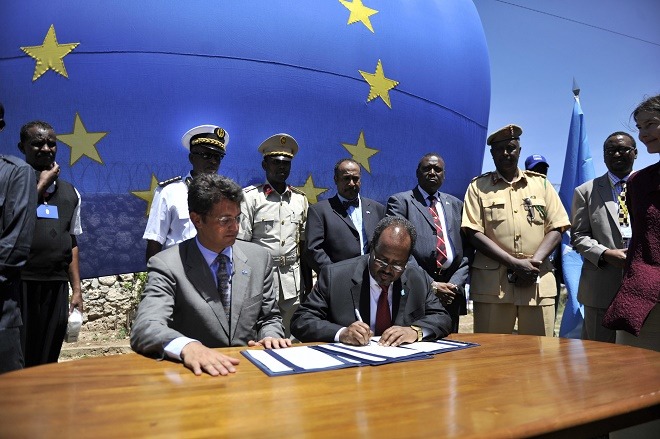 The announcement was made on Sunday in Mogadishu during celebrations to mark Europe Day and follows the signing of an Establishment Agreement between the President of Somalia H.E Hassan Sheikh Mohamoud and the EU Head of Delegation in Somalia Mr. Michele Cervone d’Urso.

The agreement formalizes the presence of EU in Somalia and in essence paves way for more European countries to open up embassies in Mogadishu.

“Today is a special day. It is Europe Day, so we wanted to move beyond words, to concrete deeds. So we signed an agreement to show that we are the biggest donor but want to be more than that. We want to be present in Somalia and want to open a delegation in Somalia,” Cervone d’Urso said.

As one of Somalia’s biggest donor, the European Union shut its office in Somalia in the flareup of war more than two decades ago. The move to reopen its office follows major improvements in security due to the intervention by the African Union Mission in Somalia (AMISOM) and the Somalia National Army (SNA), who have together neutralized and pushed out Al-Shabaab militants except in marginal areas.

Speaking during Europe Day celebrations, attended by among others, top military officials and members of the diplomatic corp, President Mohamoud hailed the partnership between Somalia and the European Union.

He said, “The EU since independence has always been a major partner of development and today after 25 years of being in a difficult situation still is”, and thanked the EU for its commitment to rebuild Somalia. He added, “Here in Somalia we have never questioned and we are in no position to question at all the level of commitment the EU has on Somalia”.

The EU Head of Delegation in Somalia and the President concurred that a lot has been achieved in transforming Somalia politically and security wise, over the years.

However, President Mohamoud noted, that despite the achievements the country still faces a number of challenges and called for prioritization of resources, saying efforts by the donor community should be directed towards rebuilding the infrastructure.

“The needs of development and reconstruction of Somalia is too many. If we try to list them, the list is endless. The trick lies now in the prioritization of those needs. How do we prioritize? What are these elements if we focus on can have immediate impact visible in the eyes of the ordinary citizen. This time, what we need is what makes the Somali citizen get back his life; to make him earn honestly and decently, what makes the Somali family have their own dish,” President Mohamoud emphasized.

The EU currently has three field offices in Somalia, which they use to oversee successful implementation and monitoring of EU funded projects. The field offices also keep the EU Delegation to Somalia, currently based in Kenya, abreast with developments in the country. AMISOM