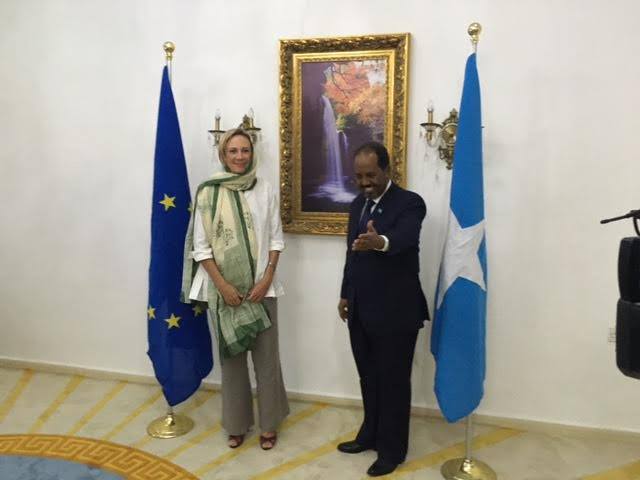 Share on Facebook
Tweet on Twitter
MOGADISHU (HAN) November 3.2016.Public Diplomacy & Regional Security News. EU Ambassador Veronique Lorenzo signals support for Somalia-EU long-term partnership deal. EU confirms its unwavering commitment to the Somali people. The High Representative congratulated the Somalia Federal government leaders for their achievements over the past 4 years and reaffirmed the European Union’s continued support to the Somali government and its reform agenda, which is committed to improving governance, to fighting against terrorists, extremist, to strengthening security and economic growth, and also to protect human rights and women’s rights, for the benefit of all Somalia.
“The acceptance by the President of the Federal Government of Somalia of my credentials on the first day of my arrival in Mogadishu is a symbol of our mutual commitment and of the EU’s determination to continue its uninterrupted support to the people of Somalia”, said Ambassador Lorenzo. 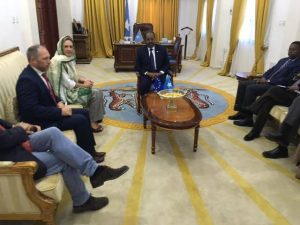 The European Union and the international community for Somalia jointly signaled  to provide a platform for the government of Somalia to set out its vision and track record on security sector reform to eliminate the enemy of the Somali people Al-Shabaab insurgency.
“I arrive at a time when Somalis are choosing the leadership to steer Somalia to a new period of peace and prosperity”, said Lorenzo. “I applaud the courage and commitment of all those who have undertaken the responsibility to see this process through to a peaceful, fair and credible conclusion that all Somalis will accept”, said Ambassador Lorenzo.
According to the archives of Geeska Afrika Online, progress has been made across a number of areas in bilateral EU-Somalia relations, on the aims of the conference Mogherini said last year: “Today we renew our commitment to stand united on the side of the Somali people; united the entire international community and the regional players to counter the forces that oppose sustainable peace and reconciliation, and to keep sustaining change.”
Mogherini’s statement means most of the European Union  heavyweights are now expected to line up behind the EU Somalia initiative to campaign in favor of continued EU Somalia security architect  and empowering sustainable good governance for the benefit of Somali people and regional security.
The High Representative informed the head of delegation of the European Union to Somalia, that “Somalia is a land of immense opportunities.” In her speech Federica Mogherini told the head of delegation of the European Union to Somalia  that: “Somalia  is a land of immense opportunities. Immense opportunities that have been and to a certain extent still are held back.  But if we are all delegations from all around the world, it is because we believe that this potential can be fully developed to the benefit of all Somalis and also to the benefit of all of us.”
The SIRAD Institute researcher for the level of security sector reform and stability of Somalia, went on: “Change is coming to Somalia. Since 2012 Somalia has achieved incredible progress and when I say incredible, this does not mean that everything is rosy today, on the contrary. But it is impressive what was achieved in four years, something unimaginable for Somalis and the International community. “
The High representative informed the head of delegation of the European Union to Somalia, also, “The empowerment of women is not only a matter of human rights and social justice; it is also about development; it is about human growth; it’s about security; it is about fulfilling the potential of Somalia,” Federica Mogherini said. “A commitment towards women is a commitment towards stronger, richer and more just societies and as the European Union we are supporting this process both politically and as the biggest financial contributor to the country’s new National Action Plan for Somali Women.”
The women’s event last month organized by the SIRAD institute and its affiliates brought together High-level participants and panelists from across the international community. They discussed the ways and means of empowering Somalia  women to share their vision and participation for security sector reform initiatives to build a stable and prosperous Somalia, as well as reinforcing the political and human rights of Somali women and how to realise those rights in everyday life.
All rights reserved. For permission to republish or make other authorized use of this material, Contact us at HAN@geeskaafrika.com Geeska Afrika Online Copyright © 2016