Home frontpage Somalia: the EU celebrates  in commemoration of the Schuman Declaration 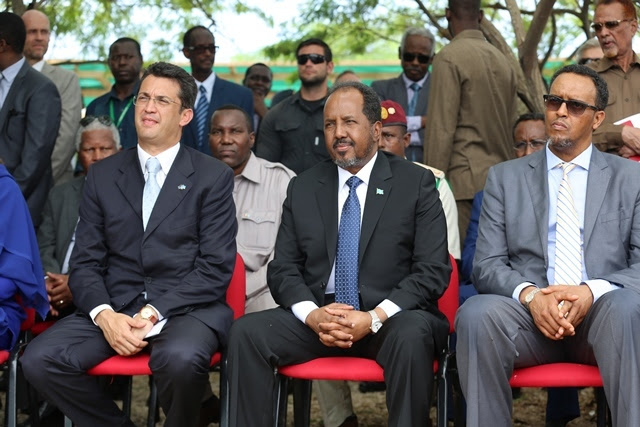 MOGADISHU (HAN) May 10.2016. Public Diplomacy & Regional Security News. PRESS RELEASE. All around the world, on 9th of May, the EU family celebrates Europe Day in commemoration of the Schuman Declaration. The Declaration, issued now 67 years ago in the aftermath of the Second World War that ravaged much of the continent, was the inspiration for today’s European Union. The message was clear: cooperate and create inter-dependence to not give violent conflict a chance ever again.

The European Union Delegation to Somalia and EU Missions and Member States were today joined by the Somalia Federal Government and friends of the EU in celebrations to mark Europe Day at a colorful event in Mogadishu.

President Hassan and Ambassador Cervone led a small number of VIPs to the site of the future EU compound where they hoisted the Somali and EU flags. The opening of a fully-fledged diplomatic mission for the EU in Mogadishu is a sign of the strong partnership between the Somalia and the EU and will further boost the EU’s commitment to promoting the interests of the Somali people.
President Hassan and his delegation later engaged on maritime security and fisheries off the coast of Somalia with EU representatives.

“The EU is Somalia’s biggest development partner and supporter and we are certain that our close cooperation will further be cemented by our full diplomatic presence in Mogadishu in order to better serve the Somali people. The EU will continue to support efforts aimed at stabilizing and rebuilding Somalia through a range of political, security, developmental and humanitarian actions” Ambassador Cervone added.

The EU ambassador urged Somali leaders and the public to seize the opportunity to show the world that Somalia has truly turned a page. The electoral process later this year, will be a litmus test. Somalia will have a chance to demonstrate that it is embracing democracy. That transparency and fairness will drive the process and that every effort will be made to ensure that woman, youth, the minorities and marginalized groups will be fully part of the process.
“The EU is Somalia’s biggest development partner and supporter and we are certain that our close cooperation will further be cemented by our full diplomatic presence in Mogadishu in order to better serve the Somali people. The EU will continue to support efforts at pacifying Somalia and more importantly at development cooperation programs which are at the heart of our support to Somalia,” Ambassador Cervone added.

As Somalia’s leading development cooperation partner, the EU channels its multimillion aid packages through the Somalia New Deal Compact that encompasses key priority areas of economic, security, education, health and developmental programs that provide meaningful and needed assistance to the most vulnerable groups in Somalia while at the same time providing much needed capacity building support to institutions for a better and brighter Somalia.