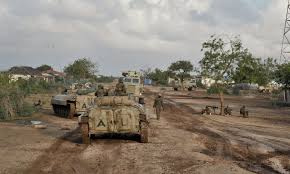 Mogadishu (HAN) June 30, 2015 – Public Diplomacy and Regional Security News – Ethiopian forces, which are part of the AMISOM forces in Somalia, Monday night took over the charge of Leego military base that was left yesterday by the AMISOM forces, citing tactical retreat. The Ethiopian forces have also barricaded the major roads that lead to the town that lies on the Lower Shabelle region of Somalia.
Anticipating an eminent face-off between the Ethiopian forces and Al Shabab, section of the resident could be seen leaving the town Tuesday morning.
The new development comes after the militant group Al Shabab on Friday attacked Leego army base where at least 20 Burundian forces were killed.A sizeable number of militants are believed to have stormed the base with some reports adding that at least 15 suicide bombers set off their explosives at the main gate to the base, creating a passage for the militants.