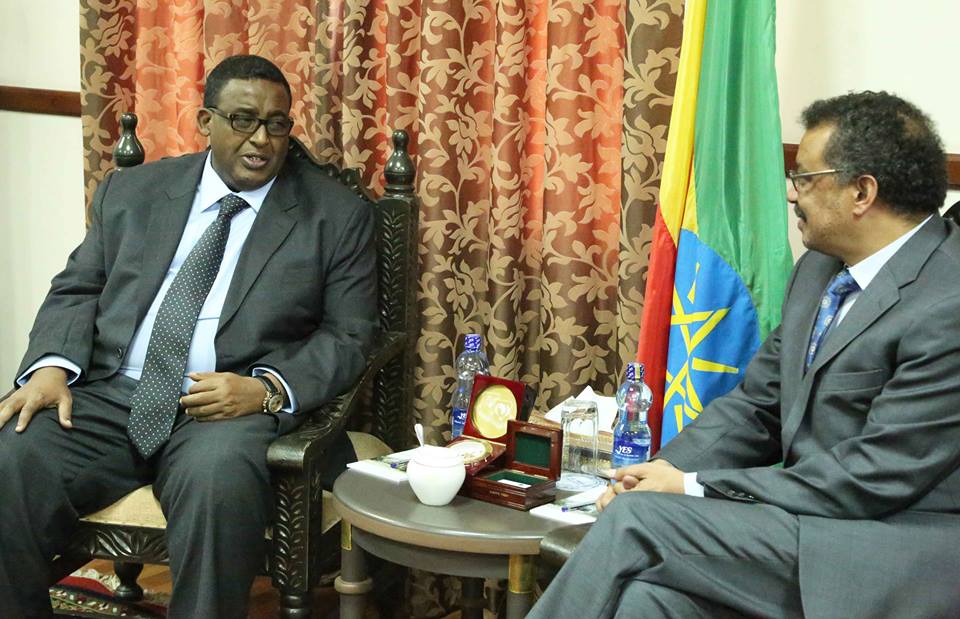 The diplomatic discussion also covered on current political and security situation and on further building on positive gains made so far in Southern Somalia. The two leaders hailed the conduct of the IGAD Ministerial meeting in Mogadishu as a great success. According to Geeska Afrika Online security reporter, Somali Prime Minister Sharmarke thanked the people and Federal Government of Ethiopia for their continued support in the effort made in rebuilding and stabilizing security initiatives in Somalia, including Somaliland, Puntland and Southern Somalia.Somali Prime Minister Sharmarke in particular commended Ethiopian military contingent of AMISOM for accomplishing successful missions in liberating vast swath of area from Alshabaab in Bay and Bakool regions.

The Somali Prime Minister Sharmarke  underlined the Federal Government of Somalia’s commitment to strengthen the strategic partnership with Ethiopia. The Ethiopian foreign minister Dr.Tedros for his part underlined Ethiopia’s commitment to continue its support as strategic partner of Somalia and in its capacity as chair of IGAD. The Ethiopian foreign minister said, Ethiopia will stand with the people and the Federal government of Somalia in their endeavor to bring lasting peace, unity and stability of the whole Somalia.

The Ethiopian foreign minister in particular noted the need for the Federal government of Somalia to redouble its effort in achieving the goals set in Vision 2016 including regional state formation, improving security and holding a national election throughout Somalia.

The Ethiopian foreign minister reiterated that Ethiopia will continue to cooperate with the Federal Government of Somalia in flushing out the common enemy, Al-shabaab from areas it continues to control to bring stability and achieve Vision 2016.

The Ethiopian foreign minister also noted to discuss trade, investment and development issues to bring in to light the steady improvement in Somalia.