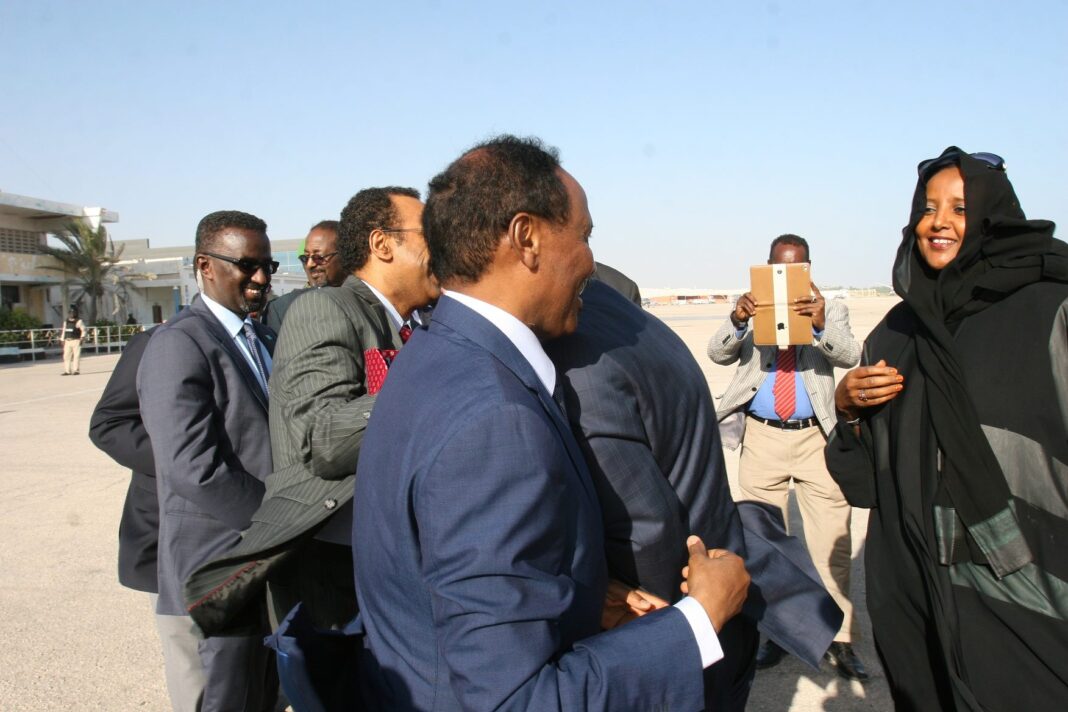 “Their grip is weakening,” Ambassador Ahmad said. Relations have improved since Ambassador Ahmad took office last year and since Addis Ababa and Mogadishu clinched an initial security deal on the sharing of global statrategy to stop Al-Shabaab terror in the Horn of Africa.

Somalia and Ethiopia, both worried by the advance of Al-Shabaab spillover, pledged on Saturday to work towards greater security cooperation in their fight against the ultra radical Al-Shabaab elements in Somalia.  IGAD foreign ministers were received at Mogadishu airport by outgoing Somali Foreign Minister Abdirahman Duale Beyle. Ethiopian Foreign Minister Tedros Adhanom, for his part, said he was “very pleased” to participate IGAD summit event in Mogadishu, adding that Somalia had “made major achievements in terms of security.”

“There are preparations being made with the assistance of the Ethiopian side in providing us with weapons and security training,” Ambassador Ahmad said.

Ethiopia already training Somali fighters in Baydhabo and Dhusa-mareeb regions to help them battle against Al-Shabaab insurgents, who control territory in Southern Somalia and villages border with Ethiopia.

“Our defense ministers will carry out a more detailed study on this security issue. We already have provided support in terms of military training. We are ready to give whatever further assistance we can in these areas,” the Ethiopian Foreign Minister Tedros Adhanom Ghebreyesus said.

Some major battles are being fought very close to Ethiopian borders, and  Ethiopia has become a haven for thousands of Somalis who fled the Al-Shabaab militants in central and Southern Somalia.

Ethiopia is ready to work with Somalia to extend its military assistance, the Ethiopian Foreign Minister Tedros Adhanom Ghebreyesus said at a joint news conference with his Somalia counterpart, Abdirahman Duale Bayl.

“There are preparations being made with the assistance of the Ethiopian side in providing us with weapons,” Ambassador Ahmad Abdi Salam said.
Background In 2007: Ethiopian Foreign Minister Seyoum Mesfin arrived here Friday for his first visit since an Ethiopian offensive last month ended some of the worst fighting in the Somali capital’s volatile history.

The minister, accompanied by some 30 officials, met President Abdullahi Yusuf Ahmed and Prime Minister Ali Mohamed Gedi on his arrival in Mogadishu.

“The visit is to discuss bilateral issues,” an Ethiopian ministerial advisor told Geeska Afrika Online, declining to give details on the length or content of the visit.

The delegation, travelling in armoured vehicles from the African Union peacekeeping force in Somalia, also visited the recently-renovated Ethiopian embassy, near the presidential palace Villa Somalia.