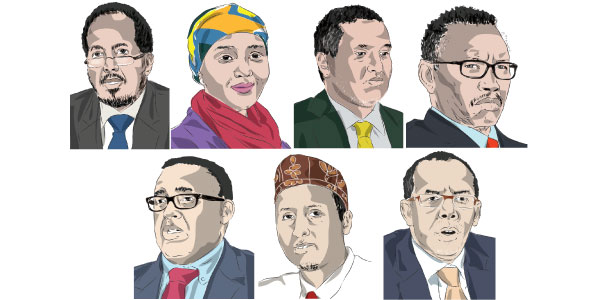 President Hassan Sheikh Mohamud will be defending his seat, in the face of accusations of performing below par. A lot was expected of Mohamud when he was elected in 2012. He received unprecedented international support.

An educationist who was involved in humanitarian affairs for many years, President Mahmud was seen as a professional who could make a difference. He has maintained a working relation with donors, who continue to bankroll the public service and the presidency.

To his credit, Somalia has done well in diplomacy, with countries such as the United Kingdom, Germany, the US, Turkey and China opening embassies in Mogadishu.

Others like Kenya, Sudan, Djibouti and Ethiopia have appointed ambassadors. The International Monetary Fund has also recognised Somalia during his tenure, enabling the country to seek multilateral and bilateral loans.

His major challenges include a failure to tackle official corruption. The latest report by the UN Monitoring Group on Somalia and Eritrea says that misappropriation of public resources continues.

In September last year, President Mahmud survived impeachment proceedings over a 2013 corruption scandal involving the repatriation of overseas Somali state assets frozen at the outset of the  civil war in 1991.

Coming from the dominant Hawiye clan, 61-year-old Mohamud has overseen the establishment of federal regions like Jubbaland, Galmudug, and Interim South West Administration. President Mohamud has failed to initiate the national political dialogue and constitutional review, and electoral reforms that could have seen the country go for one-man-one-vote as per his mandate in 2012.

He set up the Simad University in 1999 where he was dean for 10 years. He founded his Peace and Development Party (PDP) in 2011.

She Somali woman to declare her interest in the country’s presidency in June 2015. But immediately after the declaration, she received a death threat from Al Shabaab.

But the mother of four says that if she wins the presidency, she will negotiate with Al Shabaab for a peace settlement.  Ms Dayib is against the rules and cultural restrictions espoused by the group. Her priority, she says, would be to empower the women and children of Somalia by emphasising education and loans for women to run their own enterprises.

Ms Dayib, who is based in Finland, was born in Kenya. When the war broke out she and her parents were deported to Somalia but they fled to Finland.
Ever since she declared her candidature, Ms Dayib has been campaigning among civil society and women’s organisations.

A  former employee of the United Nations, Ms Dayib holds a master’s degree in health care and public health from Harvard Kennedy School of Government, Boston, US.

Mr Farole was the president of the semi-autonomous Puntland from January 2009 to January 2014.  The 71-year old Farole declared his candidature in April with a promise to eliminate the 4.5 clan  formula, which  he said  “is a disgrace to the Somali people.’’

He has taken issue with the current Puntland leadership for signing an agreement with the Federal Government on the 4.5 clan formula, which is opposed by the majority in the semi-autonomous region.

However, Mr Farole has promised to mediate the constant feud between the Bari and Karkaar clans in the northern Sool region.  He has already earned the support of the Karkaar clan elders in the northeast region.

A member of the Horseed Party, Mr Farole has served for many years in the government. He was an acting governor the Nugal region in the 1990s and later became Minister of Finance of the autonomous Puntland.

Puntland declared itself semi-autonomous from Somalia in 1998 and since then, the region has had four presidents, all selected by MPs who in their turn are selected by clan elders.

A diplomat who briefly served as Somalia’s ambassador to the US in 2014, Mr Shermarke served as the prime minister from 2009 to 2010 under former president Sheikh Shariff Ahmed.

Mr Shermarke left the office in May 2010 after a month-long feud with the then Speaker of Parliament Adan Mohamed Nuur Madobe, leading to the resignation of the latter. President Ahmed then dismissed Mr Shermarke from the prime minister’s post. In 2014, he resumed his former post as the prime minister.

Mr Sharmarke studied at Carleton University in Ottawa, where he earned degrees in political science and political economy. He holds dual Somalia and Canadian citizenship, while his family is based in Virginia in the United States.

He belongs to the Majeerteen Harti Darod clan, which traces its origin to northeastern Puntland region. He is not affiliated to any party.

The former close ally of President Mohamud resigned from his post as the senior political advisor to the United Nation Assistance Mission in Somalia in May to contest the presidency. In an interview with The EastAfrican, the 48-year old said his accumulated experience in both government and the opposition is enough to enable him to know where the key weaknesses lies.

The main items in his manifesto are regulating business, ensuring security to attract foreign investors, and building an effective judicial system that can protect private investment.

A member of the Wadajir Party, Mr Warsame graduated with a law degree at the International University of Africa in Khartoum in 1997, before proceeding for a master of laws in comparative federalism at the National University of Malaysia. He settled in the UK and in 2007 helped form the Alliance for the Re-liberation of Somalia for which he was vice-chairman.

He served as the ARS’s chief negotiator during the landmark Djibouti talks in 2008-2009, which led to the formation of the Transitional Federal Government under Sheikh Shariff Ahmed.

The founder and chairman of the Somali Social Unity Party says his agenda is to transform the economy by developing predictable and clear investment policies and laws that attract both local and international investors.

The 46-year old believes the current state of the country—runaway insecurity and corruption—is a reflection of a failed centralised government system and therefore the federal system is the choice of the Somali people.

Mr Mallin, who left his Mogadishu home in 1990, made history in 2008 in his adopted home of Sweden  when he became the only councillor  to serve a second four-year term  in Katrineholm City in Sodermanland. Mr Mallin is the proprietor of the Somaliweyn Media House that operates a radio, a magazine and a website in Sweden that he uses to draw attention of the rest of the world to his country.

Mr Mallin is a teacher of Swedish, politics and social work. He says if elected, he will turn Somalia into a modern democracy that embraces competitive politics.

“Our people should support candidates based on what they can deliver and not on which clans they come from,” he said.

A diplomat of long standing and former Somalia ambassador to Kenya, Mr Nur believes that a lot of the problems facing Somalia can be solved by the people themselves, but that they are let down by lack of steadfast leadership.

While in Kenya, the 54-year-old was a strong defender of Somali refugees. His main agenda is to provide leadership and create opportunities for the youth while instilling the message that there is hope for the future.

Mr Nur argues that despite the turbulence of 25 years, Somalia, with only 10 million people, is abundantly rich in resources; the longest coastline in Africa; more gas deposits than Qatar; 110 billion barrels of oil deposits; uranium; two permanent rivers; arable land as well as rich fishing industry.

After finishing high school, Mr Nur went for further studies in the US, where he first attended Montgomery College before joining the University of Maryland where he specialised in Economics.

He graduated in 1985 and returned home to work at the Central Bank of Somalia as the head of the accounting department until the civil war broke out 1991.