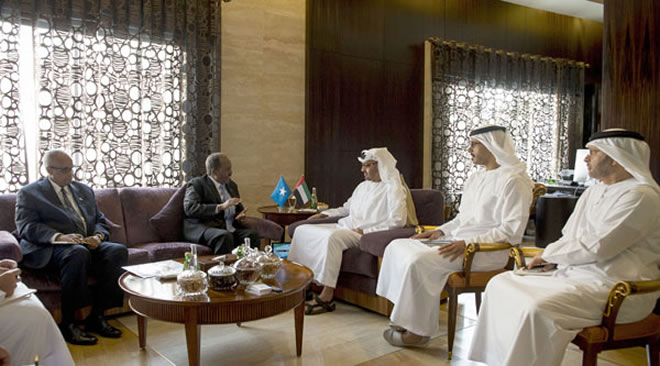 The two discussed bilateral relations and ways to enhance them in the best interest of the two fraternal peoples and countries.

They also tackled bilateral ties and the UAE’s role to implement development, economic and humanitarian projects in Somalia for the benefit of its people as well as ways to provide all support to build its future and achieve stability, security and development.

The two sides exchanged views on cooperation and promoting economic sectors, especially livestock, agricultural and transportation. Shaikh Mohammed hoped for further development and welfare of Somalia, and noted that the UAE, led by President, His Highness Shaikh Khalifa bin Zayed Al Nahyan, is the main supporter of the development projects in Somalia, and backs the Somali people to tackle terrorism and violence.

The Crown Prince of Abu Dhabi confirmed the UAE’s continuous support for the Somali government and people, praising the efforts of the Somali President during the past four years.

The Somali President extended his thanks and appreciation to the UAE under the leadership of Shaikh Khalifa for its continuous initiatives to alleviate the sufferings of the Somali people.