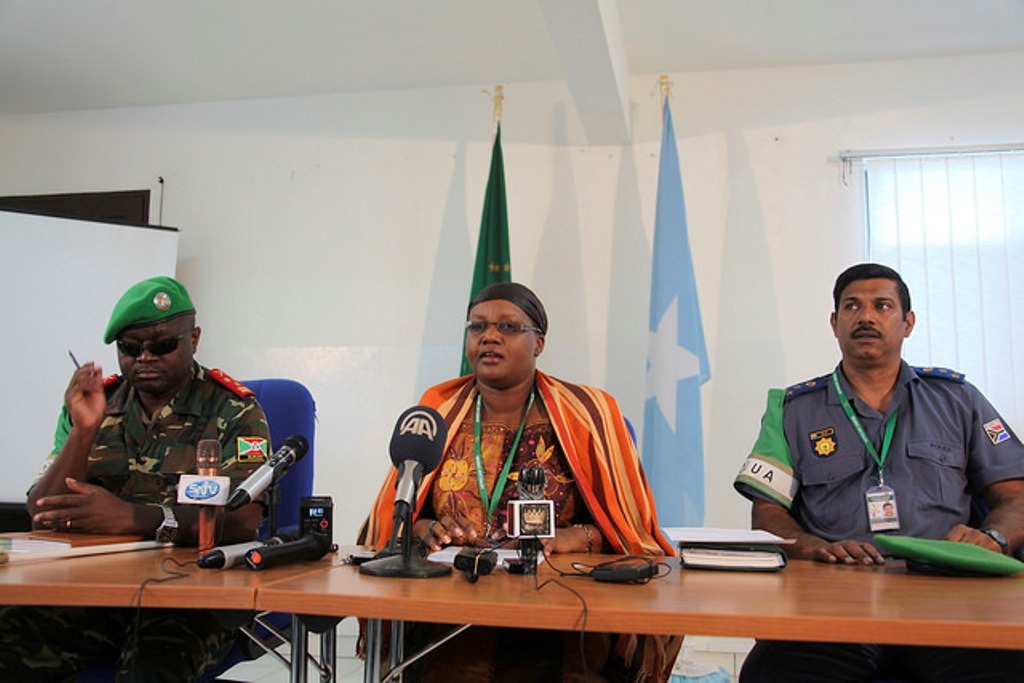 The AMISOM Force Commander Lt. Gen. Silas Ntigurirwa says such disarm operations are part of the wider effort to improve security in Mogadishu and Southern Somalia in general.

“Since we launched operation Eagle, we also launched the cordon and search in Mogadishu which is a bigger activity conducted by AMISOM troops, particularly sector one commander, which is occupied by UPDF forces, jointly, with the Somali National Army, with NISA and Somali people,” he said.

The African Union military force in Somalia, AMISOM, said the raid was carried out near the home of a former district commissioner, Ahmed Daci. The AU said that Daci’s militia fired at AMISOM, precipitating a firefight.

“During the operation, the militia was overpowered and 20 were arrested, 15 guns and an assortment of ammunition recovered,” AMISOM said

Somali Security forces shut down one of Somalia’s most respected independent radio stations on Saturday in Mogadishu, accusing it of making inflammatory and anti-Govt broadcasts, KON reports.
A reporter working with Shabelle Radio said Armed officers cordoned off the building located near the residence of former Somali president Abdikasim Salad in Mogadishu’s Hodon district and arrested journalists inside the headquarters.

“Troops from the National Security agency of Somalia Government on Friday morning raided the premises of the station and taken of air Radio Shabelle and its affiliated SKY FM (both in the same building), all staff were taken blindfolded & handcuffed to undisclosed location,” said Mohamed Bashir Hashi, a reporter.

It’s the 3rd time the Somali Government shuts down Shabelle Radio since Nov. 2009.

Separately, hundreds of people took to the street of Mogadishu’s Wadajir and Kaaraan districts, in a rally against the raid on Ahmed Hassan Adow, whose house was attacked by Somali and AMISOM troops on Friday morning.

Targeted Politician Ahmed Hassan Addow known as Ahmed Daaci was district Commissioner of Wadajir district until April this year, but Somali government argues that he has enormous illegal weapons that could fall into Al shabab hands.

At least 10 people, most of them civilians were killed and 20 others have been injured during a two-hour battle between Somali troops backed by AU forces and militiamen loyal to Ahmed Daci and his colleague Abdullah Sheikh Hassan, a local politician.

Meanwhile: Somali Security forces shut down one of Somalia’s most respected independent radio stations on Saturday in #Mogadishu, accusing it of making inflammatory and anti-Govt broadcasts

Photo: The Acting SRCC Honorable Lydia Wanyoto Mutende recieved the UN Under Secretary General for Safety and Security- Mr. Peter Thomas Drennan who paid a courtesy call on her in her office in Mogadishu. The acting SRCC and the UN undersecretary General discussed the political situation in Somalia as well as AMISOM’s military and Police activities.AMISOM Force Commnder -Lieutenant General Silas Ntigurirwa and Police Commissioner-Annand Pillay were in attendence.