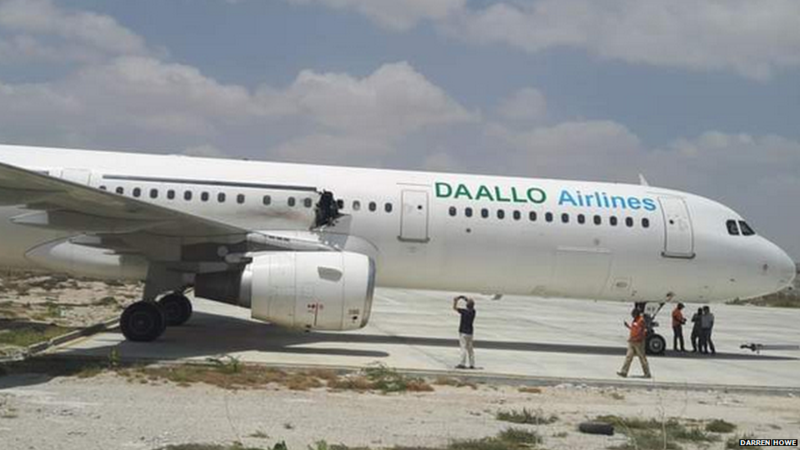 MOGADISHU (HAN) February 4, 2016 – Public Diplomacy and Regional Stability Initiatives News. A passenger on the flight forced to land at Somalia’s Mogadishu airport after a large hole appeared in the fuselage has been confirmed missing by the airline.

Daallo Airlines had previously said that all the passengers had been accounted for. It is thought that the man fell out of the hole, which appeared shortly after take-off from Mogadishu on Tuesday.

There have been fears that the damage to the flight was caused by a bomb. But the exact cause is still not clear and Somalia is currently investigating what led the hole to appear on the Djibouti-bound aeroplane.

Daallo Airlines head Mohamed Ibrahim Yasin Olad told the BBC Somali service that he hoped the investigation would be over soon so that his flights could resume but with tighter security at Mogadishu’s airport.

He said that he has given the details to security officials investigating the incident. Mohamed Hassan, a police officer in Balad, an agricultural town 30km (18 miles) north of Mogadishu, said residents had found the body of a man who might have fallen from the plane.

Security officials say two passengers were also hurt in the incident.Serbian captain Vlatko Vodopivec said he and others were told the explosion was caused by a bomb, though civil aviation authority officials said they had found no evidence so far of a criminal act.

“It would have been much worse if we were higher,” he added.
Darren Howe, who had a colleague on the plane, told the BBC that “it was not an explosion but a fuselage failure”. Daallo Airlines flies regularly from its base in Dubai to Somalia and Djibouti.

Somalia is battling militant Islamist group al-Shabab that has been carrying out deadly attacks in its quest to establish an Islamic state.