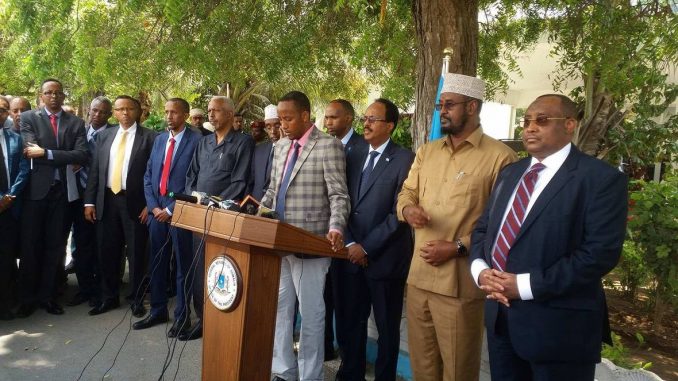 Mogadishu (HAN) 18 April, 2017 – Public Diplomacy & Good Governance Mechanism.
The national and regional level leaders of the Federal Government of Somalia held a National Consultative Forum in Mogadishu from the 15-16 of April 2017.

In the forum the issues discussed were the biting drought in the country, reforming of the different elements of the national security agencies, combating with those who refuse peace and all other international terrorist groups, the political scenario in the country, enriching the economy, the development of the economic infrastructure and strengthening the relations between the central government and the Regional States.

1. The President expressed concern over the deteriorating situation of the drought, which has affected the lives of many people and livestock and caused extensive displacement.

2. The leaders collectively appreciated the rescue efforts spearheaded by Somali citizens, both in national and international levels and as well the international community.

3. The leaders recognize the urgent need for strengthening the efforts to save the lives of the needy, and have agreed upon that a clear plan to avoid repeated drought is needed.

4. The leaders expressed positive anticipation regarding the political process in the country and the collaboration between the national and the Regional States leaders

5. The leaders giving consideration bringing peace to the country through reconciliation and they encouraged the talks between Galmudug State and Ahlu-Sunna-Waljama

7. The leaders approved the new structure of the National Security Council, which is chaired by the President of the Federal Republic of Somalia.

9. The leaders agreed that there should urgent plan for joint security forces operations to reopen key roads, thus ensuring aid can reach to the drought affected people.

10. The leaders have agreed upon that the plan for the election process in the year 2020, and that it should be started soon and accelerated.

12. The leaders have also agreed upon that special consideration should be given to the fight against corruption and there should be a modern, standard way of eradicating it.

13. The leaders endorsed the National Development Plan and its priorities, and said that there should be statistics and a new Partnership Agreement.

14. The leaders are hoping that the international community will support their decisions and the plans, which the Somali government has decided are its priorities.

15. Finally the leaders expressed their appreciation for the constant support of the international community to the Somali citizens.