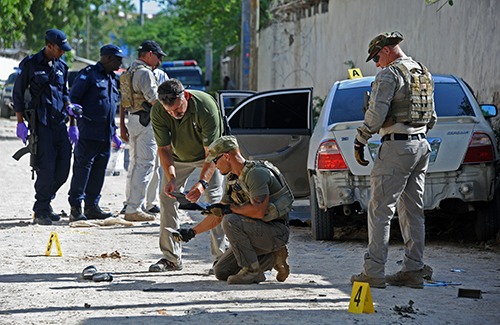 Mogadishu (HAN) December 4, 2015 – Public Diplomacy and Regional Stability Initiatives News. A Somali journalist with state-run media was killed today in Mogadishu when a bomb blew up her car, according to news reports. Hindia Haji Mohamed was the widow of another journalist killed in an attack in Mogadishu in 2012.

Hindia was a producer and reporter with the state-run outlets Radio Mogadishu and Somali National TV. A bomb planted under the seat of her car was detonated by remote control, a journalist familiar with the case, who asked not to be named, told CPJ. Reports said Hindia was leaving university at the time of the attack. She was taken to a local hospital where she died a few hours later, the journalist said.

In the past five years, 25 journalists have been killed in Somalia for their work, and the country ranks at the top of CPJ’s Global Impunity Index , which spotlights countries where journalists are murdered regularly and their killers go unpunished.

“The death of Hindia Haji Mohamed is a tragic reminder that Somalia is the world’s worst offender when it comes to the murder of journalists with impunity,” said CPJ Africa Program Coordinator Sue Valentine. “We urge the authorities to investigate her murder, bring the killers to justice, and work harder to create an environment in which journalists can report the news freely and in safety.”

No one immediately claimed responsibility for the bombing. Members of the state-run media are often threatened and attacked by militants in the region, CPJ research shows . CPJ could not immediately determine if Hindia had received threats before her murder.

Hindia was the widow of Liban Ali Nur, who also worked for Radio Mogadishu andSomali National TV, and who was murdered on September 20, 2012.

According to a statement emailed by the National Union of Somali Journalists, Hindia was a single mother of seven children. The union said a pedestrian walking near the journalist’s vehicle at the time of the explosion was seriously injured.