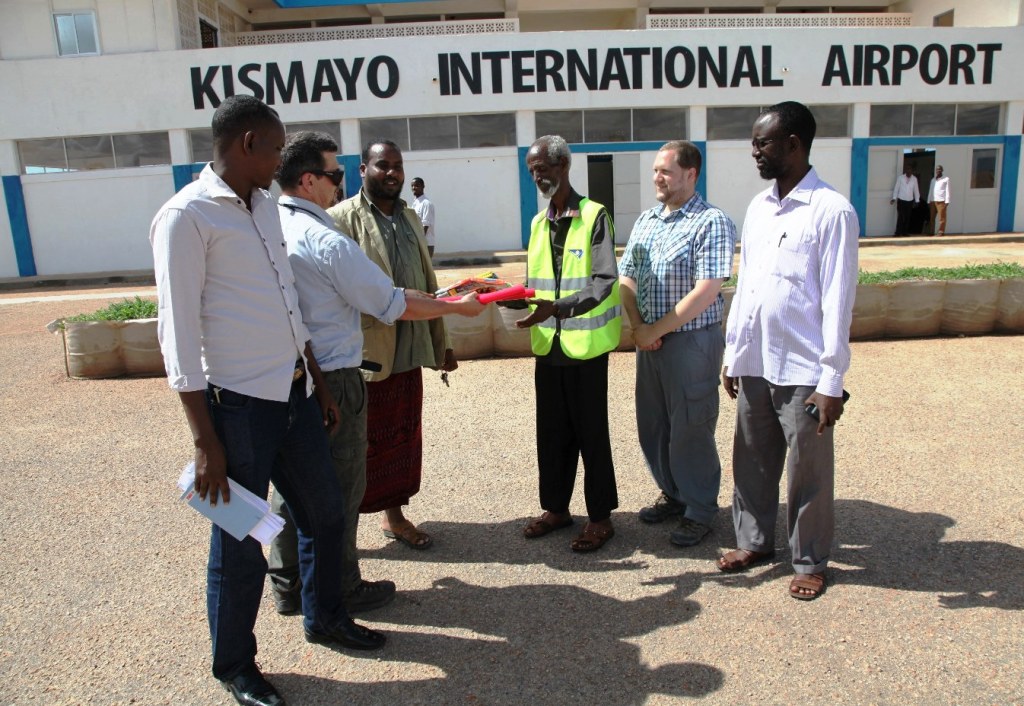 Kismayo (HAN) May 31, 2014 – In a rare gesture of kindness, a Canadian family donated airport gear to a Kismayu airport marshaller after they were moved by his story of working without proper gear which was published in the African Union Peacekeepers in Somalia, AMISOM page.

Canadian economist, Sean Paterson from Salmon in British Colombia who is a chief technical advisor working for the United Nations Industrial Development Organization (UNIDO,) says after reading the story of 63 year old Adan Mohamed his 14 year old son Noah Jordan asked him what they could do for the poor old Somalia airport marshaller.

The story moved Sean and his son Noah so much that they decided to buy the kits themselves.

They spent $ 35 Canadian dollars to buy a reflector jacket, a pair of reflector gloves and paint and used some of their free time to make two luminous red reflector sticks using wood for Mohamed Adan, the marshaller to use for directing planes during taxing and take off at the Kismayu international airport in southern Somalia.

“I told my son Noah we could buy Adan Mohamed the kit and so we went to a local supermarket and grabbed him a reflector jacket, a pair of gloves. Since he works during the day we thought he would not need a light reflector and so we made him two sticks using wood and painted it luminous red for him to use to direct plane instead of using his bare hands,” Sean said, moments after handing over the kit to Adan in Kismayo, a southern port city located along the Indian Ocean.

Before he received the gifts, Adan used his bare hands to direct planes and had no gloves or even a reflector jacket endangering his own life especially during foggy weather during the rainy season when visibility is so low forcing him to be careful not to be hit by the planes he is directing.

Adan was elated with the presents and gesture.

“I cannot explain how I feel because I have never received a present in my life. It is so kind of them to remember me thousands of miles away and bring me these gifts. I have worked at this airport for the last 23 years under very hard and tough moments under 17 different administrations. The only thing that makes me happy is that this administration in control now wants to bring change and development and that is what keeps me going,” the 43 year old slim Adan said, barely speaking out of excitement.

Since then, pilots flying into Kismayu international airport have already noticed the difference after Adan started using the kit he was given by Sean.

“I noticed a difference with Adan today. I clearly saw the reflector sticks and his jacket and I was actually wondering whether it was him,” One pilot who did not give his name said.

Sean, who is an economist by profession, says he does more than he talks and that his family is happy to help in whatever little way possible.

“The 35 Canadian dollars and the time we spent in making him the reflector sticks is really nothing compared to the feeling of doing something good or helping improve someone’s life or work. We are really glad we made a difference in Adan’s life and you never know maybe someone working in a real airport might read this story and decide to help Adan or any of the airport staff in Kismayu or Somalia because information is power and reaches far and wide, just like it reached me in Canada,” Sean added.

Kismayu is a southern port city in Somalia that is known for its farmlands and white pristine beaches. Just like the rest of chaotic Somalia, in the last few years the city witnessed brutal war as different warlords and militia groups fought over the control of the city’s international airport and seaport.

The last group to be wrestled out of the seaside city is the Somalia militant group Al-Shabaab linked to Al-Qaeda. In September 29 2012, a combined force of Somalia forces and Kenyan military recaptured Kismayu from Al-Shabaab after months of fighting.

Since then, Somalia forces and AMISOM peacekeepers from Kenya, Sierra Leon and Burundi continue to maintain peace in the city opening it up to international and local investment as natives return to invest back home. Sources: puntlandi

The latest updates Follow twitter.com/GeskaAfrika
Speaking Freely is an Geeska Afrika Online and Horn of Africa Newsline (HAN) feature that allows guest writers to have their say. if you are interested in contributing or sending News, Views and Comments. Please email at: han@geeskaafrika.com