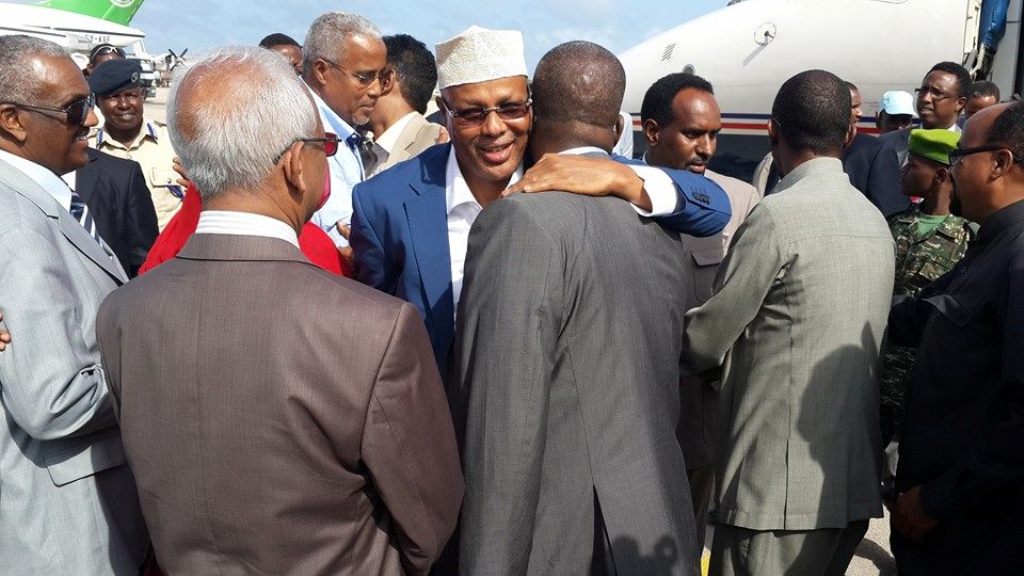 According to Geeska Afrika Online security reporter in Mogadishu sources, claiming that Prime Minister Abdiweli Sheikh Ahmed not get a free hand in first ministerial reshuffle, the Somali president elected on Yesterday said the exercise has “failed” to show the Prime Minister  policies to work with the current Somalia strategy te regain security and stability to create an environment of teamwork and reconciliation.

The only message one gets is that even today, the PM is not able to bring into effect a reshuffle by rising above pressure. He has failed on the expectations of the people,” Presidential press lease and  spokesperson said. He alleged the Prime Minister targeted issues was not capable of giving any political message.

No brave efforts were made to remove those against whom there were talks of corruption or those whose names have appeared in a secret internal memo of Puntland Strategy towards Mogadishu’s future stability.

The Prime Minister has only sent his ministerial reshuffling signal from one critical issues to another,” he said.
The Prime Minister Abdiweli Sheikh Ahmed not get a free hand in first ministerial reshuffle, among the biggest changes in cabinet responsibilities was the shifting of Farah Abdulqadir, a key ally of the Somali President, Hassan Sheikh Mohamud, from the key post of the Minister of Justice and Constitutional Affairs to, now, the Ministry of Veterinary and Animal Husbandry. He has been replaced by Salim Aliyow Ibrow who until this morning was in charge of Mr. Abdulqadir’s new portfolio.

Somali political commentators and analyst argued that the reshuffle highlights the increasingly apparent rift between the President and the Prime Minister which until recently, has been played down by both camps.

“It is obvious that the Prime Minister is targeting the President’s allies and I think this will not end well for him if it continues,” said a political analyst that did not want to be named.

“Whether the Prime Minister will finish his term or not I am not sure but he has fired a canon in the direction of the President and we can expect the President to retaliate in the near future,” said a former MP now turned adviser to the international community. “Who the victim will be is easy to speculate.”

The office of the Prime Minister and President have yet to comment on the reshuffle but there is clear consensus among Somali political analysts and MP’s that if this rift between the two most powerful executive office’s continues, the Somali people and their development path will be affected.