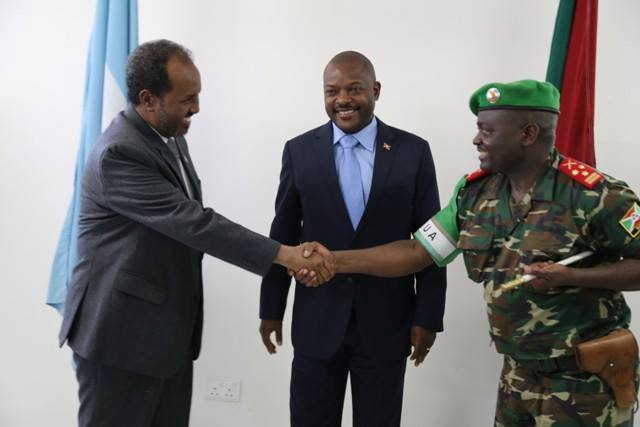 Djibouti (HAN) April 22, 2014  –  Burundi President, His Excellency Pierre Nkurunziza, today made a historic visit to Somalia to check on his forces serving under the African Union peacekeeping mission as well as pay a courtesy call to Federal  Somalia Ledaer,  President Hassan Sheikh Mahamoud of Somalia.

Burundi has sent six battle groups in Somalia and has provided three Deputy Force Commanders. Lt. General Silas Ntigurirwa from Burundi is the AMISOM Force Commander. He recently took the command of mission from Lt. Gen. Andrew Gutti from Uganda.

During his visit to Somalia, the Burundian President expressed optimism about Somalia’s future, and reaffirmed his government commitment to work in partnership with the Somali government to promote peace and security. 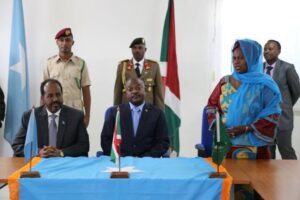 “I am delighted to have visited Somalia at a crucial time for the Federal Government in their fight against Al Shabaab and terrorism. Burundi government now has appointed its first Ambassador to Somalia, we also have our troops serving with AMISOM who have been in Somalia since 2007 and the relationship between the two countries is excellent.” Said President Nkurunziza.

The president had a message to Somali people “my message to Somalia is that of hope and peace, I encourage the people of Somalia to have hope, Burundi was once ravaged by civil war however because of political goodwill of all Burundians, we now live in peace. There is a time for everything, a time for war and a time for peace and development and now it’s a good time for Somalis to think about peace and stability”

During his time in Somalia, President Nkurunziza also addressed AMISOM troops and thanked them for the contribution they have made to the security and stability of Somalia. “We are deeply grateful to AMISOM forces for the sacrifices you have made to help our Somali brothers.”

The Amisom Military Component is the biggest of the three components of the Africa Union  Security missions in Somalia. The Amisom component is a UNSC mandated to conduct peace support operations in Somalia and seeks to stabilize the situation in Somalia, create the necessary conditions for the conduct of humanitarian activities and an eventual handover of the Mission to a United Nations Peacekeeping Operation in Somalia 2016.