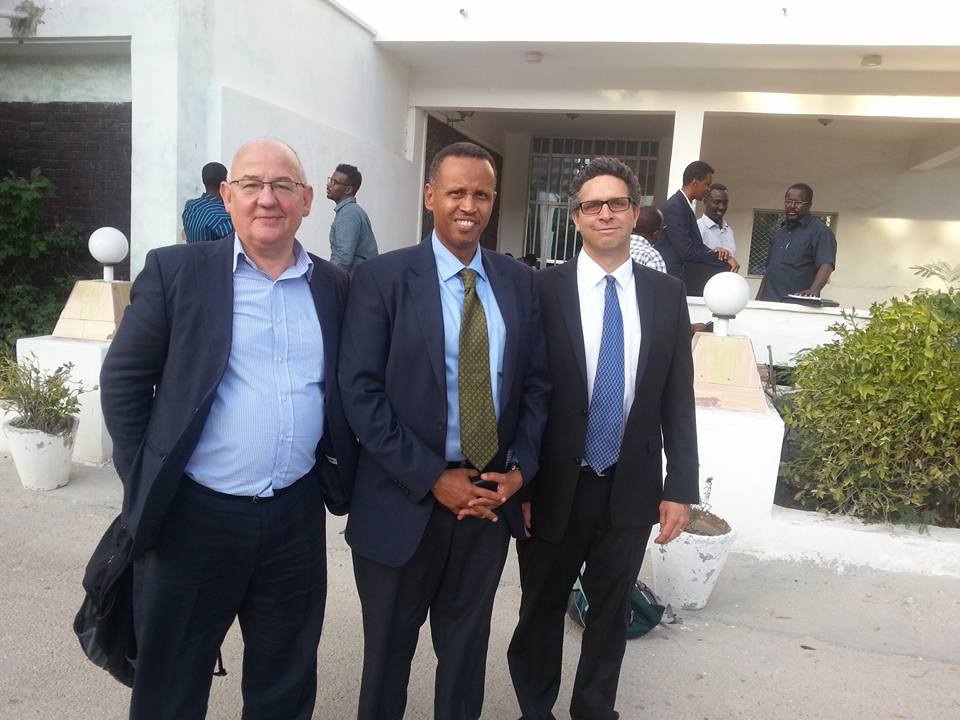 MOGADISHU (HAN) January 29, 2016 – Public Diplomacy and Regional Stability Initiatives News. By Colin Freeman. Even by Somalia’s standards, the village of Amara is a lawless place. A tumbledown hamlet in the sunbleached scrubland north of Mogadishu, it lies in a “no man’s land” between turf controlled by local warlords and the al-Shabaab Islamist militia. It is the perfect spot to keep hostages, and during the height of the Somali piracy crisis, its shabby homes served as jails for Paul and Rachel Chandler, the kidnapped British yachters.

Last month, another group of hostages finally walked free from Amara – this time four bedraggled, traumatised crewmen from the Prantalay 12, a hijacked Thai fishing vessel. But while their release did not attract the publicity that Western cases do, their place in the history of piracy is already assured. The four sailors had been held for just short of five years, giving them the dubious distinction of being the longest-held Somali hostages on record. Abandoned by the ship’s owners, who had failed to pay kidnap and ransom insurance, six of their fellow crewmen had already died from illness and neglect. That the rest have been spared the same fate is thanks not to a team of special forces soldiers, but to an ex-British army officer with a kind – if slightly unreliable – heart.

Two years ago, Colonel John Steed, a former military attache to the British embassy in neighbouring Kenya, began his own personal mission to save those who were dubbed the “forgotten hostages” – the 100-plus sailors who still languished in pirate custody as of 2013. Drawn exclusively from poorer nations, their stories are a dark mirror image of that of Captain Phillips, the hijacked American whose rescue by US Navy seals became a blockbuster movie. Most have spent years in captivity, left to their fate not just by their employers but by their governments, who lack either the will or the means to mount rescues.

Mr Steed’s only chance is to get the pirates to see the sailors as a lost cause too. He tactfully persuades them to abandon hopes of a multi-million dollar ransom, and settle for a much smaller payment of “expenses”, which he scrapes together from charitable donations.

A high-stakes, dangerous game, it is not for the fainthearted – something that Mr Steed, 59, is all too well aware of, having suffered a serious heart attack just three months into his work. Still, given how close last month’s release operation came to disaster, it seems his heart surgeon did a good job. After raising a sum believed to be around $150,000 for the release of the four Thais – a fraction of the original $9 million ransom demand – Mr Steed flew to the Somali town of Galkayo, from where he despatched a team of Somali go-betweens to undertake the exchange in a patch of desert outside Amara. All was going fine, until he got a call on his mobile. He could hear a firefight.

“An al-Shabaab faction had attacked both my group and the pirates – they were probably after the money,” Cornwall-born Mr Steed told The Sunday Telegraph from his home in Nairobi, where he works from an office in his spare room. “I could hear the rounds going off in the background, and as someone who had a heart attack not that long ago, I could feel my blood pressure going rather high.

“Luckily, we’d arranged a strong guard force of about a dozen armed men, and they were able to see the attackers off. If we’d lost the money, it would have been disastrous.”

The four Thai sailors are now back home, after a 1,774-day ordeal that sounds like something from Coleridge’s Rime of the Ancient Mariner.

Thinking the owner’s refusal to pay a ransom was a bluff, the pirates quickly departed from the usual Somali practice of treating their captives humanely, deliberately giving them salty, brackish drinking water. Five eventually died after suffering swollen limbs and various other conditions, and were buried at sea.

The rest were transferred to the Somali mainland after a drunken pirate crashed their ship, since when they have spent their time in a dark, windowless hut with nothing to do. Unable to speak English, they initially thought that the go-betweens who came to pick them up were another pirate gang, their bafflement growing even greater when a group of local officials handed them smart suits to wear for the handover to Mr Steed. He arrived to find what looked like a Thai business delegation in the middle of the Somali scrub.

“It was a very emotional moment, and there were some tears in the plane out,” he says. “Three of them don’t seem too bad, given the circumstances, but one is showing signs of quite severe psychological trauma.”

A former Royal Signals officer, Mr Steed first dealt with pirates during his work as a military attache, and continued to do so when he moved to a job as a counter-piracy expert with the UN’s Somalia office in 2009. He realised that while a great deal of public money was being directed at fighting the pirates, very little was being done for their victims.

“We were building pirate prisons and funding prosecutions that would respect their human rights and so on, but we weren’t really doing anything for the victims at all,” he says.

Having realised that if he didn’t do it, nobody else would, Steed raised some money from various UN contacts to fund an office, from which he draws a modest stipend. Often his first challenge was simply finding out where the hostages were and who was holding them. Tracking down the ships’ owners was even harder, with many claiming to have either gone out of business or simply going underground.

“It is disgusting,” he says. “They are sending people into known pirate zones without adequate insurance coverage, and then abandoning them when they get into trouble.”

At first, he says, he gets short shrift from the pirates. While their boom years are long over – the posting of armed guards on ships has all made hijackings all but impossible – many are used to raking in up to $10m per ship, and can be difficult to convince that they have picked a vessel with no owner willing to cough up.

Still, even on Somali wages, the costs for a pirate leader of paying his men to guard a ship for years on end can run into tens of thousands of dollars. An offer to at least cover their “expenses” can eventually prove tempting – especially if the pirate leader has “investors” to pay off, and especially if the alternative might be nothing at all. It is a painfully slow process: it has taken Mr Steed two years to free just two ships. Those who argue that pirates should never be paid any money whatsoever, he adds, are not living in the real world.

For security reasons, he is coy about exactly where his “expenses” money comes from – beyond saying it is from a private charity of limited means. He is, however, happy to mention the role of those who provide pro-bono help, which again is a mainly British effort. A firm of London-based shipping lawyers, Holman Fenwick Willan, provide legal advice, while he is helped in the negotiations is by , one of Britain’s most experienced kidnap negotiators.

“A lot of negotiating firms did well out of piracy during the boom years of 2008-11, and we have a moral duty to deal with those hostages left behind,” says Edwards, who has dealt with kidnappers of every kind, from al-Qaeda and the Taliban through to Colombian drug cartels.

“Dealing with pirates isn’t what people usually imagine solicitors doing, and the work is challenging and emotive,” added Richard Neylon, of HFW. “But it’s very good when you’ve played a part in helping to save these seafarers’ lives.”

That was certainly the case with the Albedo, whose mainly Indian, Pakistani and Bangladeshi crew was taken hostage in November 2010, and which last year became Steed’s first successful case. As the ship’s captors grew ever more frustrated at the owner’s refusal to pay a ransom, they resorted to tactics as brutal as those in piracy’s medieval heyday.

Sailors were lashed until they passed out, had their fingernails torn out with pliers, and were forced to lie on the sun-baked deck for hours on end. On one occasion, the entire crew were put in the ship’s disused swimming pool and kept without food or water for three days, while the pirates urinated on them and hurled in pails of sewage. One sailor was shot in cold blood as a warning to the owner, while four others drowned when the boat sank in heavy seas. Mr Steed said that when his team finally got them out, it was “the greatest feeling in the world”.

Even his long-suffering heart doctor has become a convert to his cause, Mr Steed recruiting him to medical check-ups on newly-released hostages. Mr Steed now has eyes on a third crew, the 26 men of the Taiwan-owned Naham 3, whose third anniversary in captivity beckons at the end of this month. And every so often, new “forgotten” cases come to light.

“During the Thai case, we learned that there were two Kenyan medics being held in the same village,” he said. “It’s now just a question of trying to raise the money.”