Mogadishu (HAN) March 16. 2016. Public Diplomacy & Regional Security News. By Abayomi Azikiwe. Pentagon’s air campaign in Somalia coincides with the years-long proxy war inside the country which has resulted in the deployment of 22,000 troops (AMISOM) from eight different African states who are trained, armed and given logistical support by Washington, the United Nations and the European Union (EU). In addition, the Somalia National Army (SNA) is supplied by western governments and their allies in an effort to transition the character of the war to defeat the Al-Shabaab organization, which maintains control over large areas of the country. 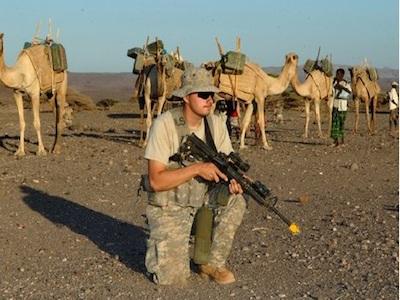 Bombings and ground campaign have not brought stability to the country

On March 7 the Pentagon announced that it had killed 150 members ofthe Al-Shabaab guerrilla movement in a bombing operation in Somalia.

These military actions are part and parcel of a broader United States foreign policy strategy to dominate the Horn of Africa. The administration of President Barack Obama has continued the military and political intervention in Somalia aimed at remaking the political landscape of the East African state which shares borders with some of Washington’s closest collaborators in the region including Ethiopia, Djibouti and Kenya.

The administration’s rationale for a renewed air campaign in Somalia was to downgrade and destroy training bases for Al-Shabaab. The Islamist movement has not only continued its war against the western-backed regime in Mogadishu but has crossed over into neighboring Kenya and Uganda in apparent retaliation for their military deployments in the country as members of the African Union Mission to Somalia (AMISOM) established in 2007.

A Department of Defense press release claimed the targeted area “is a training facility of al-Shabaab which is a terrorist group affiliated with al-Qaeda. The strike was conducted using manned and unmanned aircraft and the fighters who were scheduled to depart the camp posed an imminent threat to U.S. and AMISOM forces.” (March 7)

An escalation in the Pentagon’s air campaign in Somalia coincides with the years-long proxy war inside the country which has resulted in the deployment of 22,000 troops (AMISOM) from eight different African states who are trained, armed and given logistical support by Washington, the United Nations and the European Union (EU). In addition, the Somalia National Army (SNA) is supplied by western governments and their allies in an effort to transition the character of the war to defeat the Al-Shabaab organization, which maintains control over large areas of the country.

This bombing operation was followed on March 9 by reports that at least 15 Al-Shabaab fighters had also been killed in another raid led ostensibly by the imperialist-backed and trained Somalia National Army (SNA) troops working in conjunction with U.S. Special Forces. News of the second attack emanated from al-Shabaab itself and a Somalian federal government official.

Sheikh Abdiasis Abu Musab, a spokesperson for Al-Shabaab, stressed that foreign soldiers had attacked their base located approximately 30 miles (50 km) from the capital Mogadishu in the Lower Shabelle region.

Abu-Musab said of the attackers that “They were masked and spoke foreign languages which our fighters could not understand. We do not know who they were but we foiled them.” (Reuters, March 9)

According to Abu Musab, Al-Shabaab only lost one fighter contradicting reports from other media and governmental sources. The Islamist organization said that the military commandos landed along the River Shabelle.

They then dropped off the commando unit which travelled to the Al-Shabaab base located in the town of Awdhegle. The suspected Special Forces unit were armed with M16 rifles and rocket launchers utilized in the attack.

U.S. government officials later announced to the press that their military troops were involved in the attacks alongside western-backed Somalian military forces, noting the operation had resulted in deaths among the Al-Shabaab combatants.

The latest phase in the war of containment, domination and control of the resource-rich Horn of Africa state is approaching ten years when Washington attempted its renewed efforts to impose a political dispensation on the country beginning in 2006.

After the failure of the 1992-1994 occupation of Somalia by thousands of U.S. Marines, U.N. troops along with allied forces from Canada and other states, when the people of this beleaguered state rose up in an uprising, successive administrations sought avenues to interfere in the internal affairs of the country. Somalia had not been able to set up an internationally-recognized government since the collapse the regime of Mohamed Siad Barre in early 1991, a U.S. ally in Africa.

During 2006, an Islamic Courts Union (UIC) movement began to solidarize with local organizations establishing a political system that operated independently of the foreign policy imperatives of the administration of former President George W. Bush. Washington encouraged its contacts inside Somalia to force out the Islamic Courts which proved to be a disaster.

Sentiments towards the U.S. government became even more hostile leading to the invasion of Somalia by neighboring Ethiopia, which is a staunch partner of Washington in its so-called “war on terrorism.” Yet, the intervention of the Ethiopian military then under the leadership of the late Prime Minister Meles Zenawi, was by no means sufficient to drive out the Islamic Courts movement from Mogadishu and other areas in the central and south of the country where they had taken control.

Over the next three years, the Islamic Courts split over whether to enter a transitional government in Mogadishu that was backed by the imperialist states. By 2009, the Al-Shabaab group, meaning “the youth”, emerged as the main opposition to the U.S. and British supported regime in the capital.

The escalating deployment of forces from Uganda, Djibouti, Kenya, Ethiopia, Sierra Leone and other African states strengthened the AMISOM operation driving out Al-Shabaab from most of Mogadishu and some other areas of the country in the central and southern regions.

Nevertheless, Al-Shabaab remained strong while attracting fighters from other countries and reportedly pledging allegiance to Al-Qaeda.

At present the EU, one of the major funding and logistical supporters of AMISOM, said that it would reduce its assistance by 20 percent. This announcement has prompted sharp rebukes from those states which have served as ground units propping up the federal government in Mogadishu.

According to an article published by Jane’s Defense Weekly, “The move was criticized during a summit of leaders from AMISOM’s contributing countries in Djibouti on 28 February. Kenya’s president Uhuru Kenyatta said in his speech that the international community must provide adequate support for the mission in the run-up to elections later this year.” (March 3)

Kenyan President Uhuru Kenyatta said “This is the time to strengthen AMISOM through a surge in troops and resources, not weaken it.”

The same Jane’s Defense Weekly report noted that a “joint declaration released at the end of the summit said the leaders noted ‘with serious concern the decision by the EU to reduce financial support to AMISOM troop allowance by 20%, especially during this critical phase of AMISOM operations’ and called on the UN to cover the resulting shortfall.”

The Obama administration’s recent bombing of the country does signal a greater reliance on air power and the drawing-down of military assistance to AMISOM and the SNA. Exposing further the dominant imperialist role in the war against Al-Shabaab in Somalia, AMISOM has announced that it will rely more on air power in light of the reduction of funding from the EU.

Kenya’s Nation newspaper stated on February 21 that AMISOM “may have to concentrate more on air strikes than ground attacks in its war against Al-Shabaab militants to minimize expenses after one of its main donors reduced funding.”

Nonetheless, overall these developments
provide no real plan for a reduction in the escalating Pentagon, Central Intelligence Agency (CIA) and State Department involvement in Somalia and the Horn of Africa. The U.S. Africa Command (AFRICOM) which has thousands of troops in Djibouti and other continental states has been bolstered under the Obama administration.

The absence of any substantive discussions surrounding foreign policy in Africa during the presidential campaign leaves policy-making to the intelligence agencies and the defense department much to the detriment of people in Africa as well as in the U.S. Unless this situation changes dramatically, there will be no real shift in Washington’s foreign policy in the region.