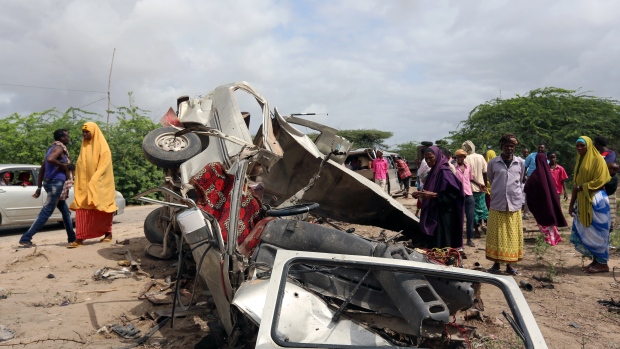 MOGADISHU (HAN) June 30.2016. Public Diplomacy & Regional Security News. At least 18 civilians were killed when a roadside bomb went off on Thursday in Somalia’s Lafole town, southwest of the capital, blowing up a packed minibus that was passing by, police said.

There was no immediate claim of responsibility. The al-Shabaab militants have frequently launched attacks against security forces and civilians around the country in the past. The group wants to topple the Western-backed government.

“All the 18 people on board the minibus are dead and burnt. A remotely controlled bomb along the road exploded,” said Abidkadir Mohamed, a police officer at the scene.

Nur Ahmed, who was driving along the same road, said the minibus was being escorted by a vehicle carrying troops.

A government truck full of soldiers followed by the minibus overtook him at high speed before he heard a loud explosion, Ahmed said.

“The government car which was probably the target escaped undamaged,” he said.