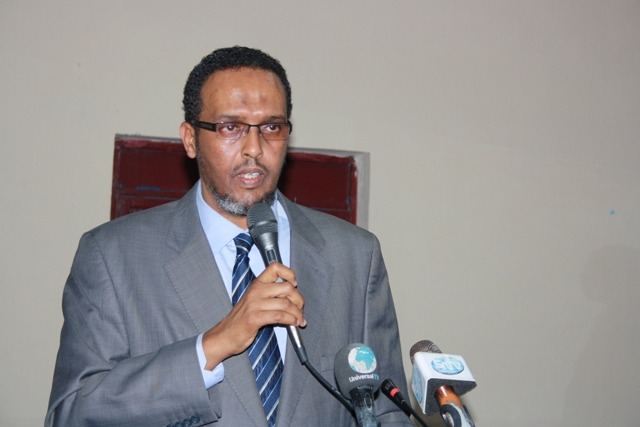 Mogadishu (HAN) February 20, 2015 – Public Diplomacy and Regional security news. car bomb blast aftermath. A suicide car bomber blew himself up at the gate of a hotel which was being used by a memebrs of Federal Parliament and deputy prime minister, Mohamad Omar Arte Ghalib.

A militant car blew up at the entrance of the Central hotel, beside National Theater and four Al-Shabaab militants were reportedly killed by security forces after attempting to launch a follow-up attack inside the hotel.

Mogadishu Police Chief said the explosive device was set off in-front of the Hotel (Nasa-hablood 2) in the capital’s center town.

Police Chief added that the car was destroyed as a result. The Somali capital police chief did not give any information about the casualty’s identity.

There was no immediate claim of responsibility for the explosion, but officials have blamed the Al-Shabaab for similar attacks in the past.
Photo: deputy prime minister, Mohamad Omar Arte Ghalib in Mogadishu