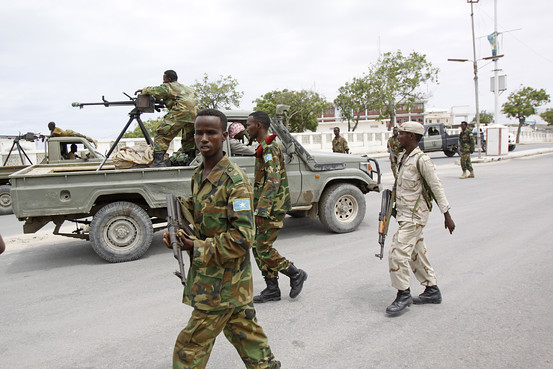 Somalia President Hassan Sheikh Mohamud said Saturday security has been beefed up in Mogadishu and its environs ahead of the regional summit to be held on Sept. 13.

Mohamud said leaders from the eight members of the Inter-Governmental Authority on Development (IGAD) bloc – Djibouti, Ethiopia, Kenya, Somalia, South Sudan, Sudan and Uganda – are expected to attend the summit. The summit is expected to focus on political and security progress made in Somalia and the forthcoming in-direct elections planed for September and October. The summit will also focus on ways to bring an end to the conflict in South Sudan.

“Mogadishu town will host the IGAD summit next week and that that is why the security in the capital is tightened, I request the people to work with the security forces to ensure success of the summit,” he told journalists in Nairobi.

Although the Al-Qaida allied militant group, Al-Shabaab had been forced out of Mogadishu, it is still carrying out attacks on government, and public places including the Africa Union bases.

“Security forces will increase patrols around the city and I wish to urge Somalis to show patience as the town hosts international level meeting,” he said.

Somali Foreign Minister Abdisalam Omar Hadliye said the meeting will be the first of IGAD Heads of States and Government to be held in Somali capital Mogadishu after more than two decades of conflict.

“IGAD Summit will take place in Mogadishu on Sept. 13. It is great opportunity for Somalia to host such meeting because the country has never hosted international level meetings since 1974, and AU head of States had a summit in Mogadishu at that time,” Hadliye said earlier.

The minister however decried security concerns citing Al-Shabaab terrorist group which has been fighting to topple the Western-backed government.

He said heavy security is underway to enhance the security, seal all loopholes and make sure the significant summit takes place successful.

About 22,000 strong force from the African Union are mandated to assist the Somali government in fighting Al-Shabaab terrorists, providing security for the country’s important establishments in an effort to bring back to stability.