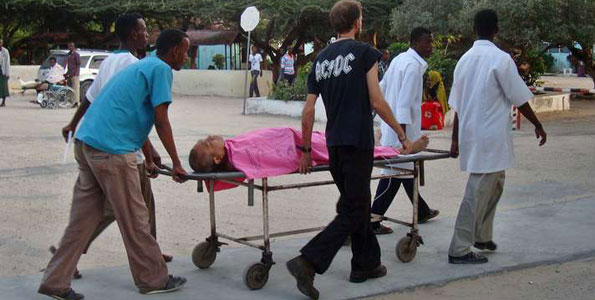 MOGADISHU (HAN) January 27, 2016 – Public Diplomacy and Regional Stability Initiatives News. By: Katy Migiro. Attacks on aid workers delivering supplies in Somalia almost doubled in 2015 and the number killed jumped to 17 from 10 the year before, the United Nations said on Tuesday.

Somalia has been mired in conflict since civil war broke out in 1991 and is one of the most difficult countries for relief agencies to operate in.

The number of attacks on aid agency staff there rose to 140 last year from 75 in 2014, the world body said.

The Islamist militant group al Shabaab has waged a decade-long insurgency against the Somali government, which is backed by African Union troops. Warring parties have deliberately targeted aid workers and manipulated aid for political gain.

“Attacks and threats against humanitarians increased,” the U.N. Office for the Coordination of Humanitarian Affairs said in a bulletin, adding that there were also 18 injuries, 11 abductions and 38 arrests in 2015 involving aid agency staff.

Some parts of south-central Somalia are only accessible by air, driving up the cost of delivering essentials like food.

African Union troops have taken major towns from al Shabaab but the group still controls swathes of countryside and has laid siege to urban areas.

Northern regions of the Horn of Africa nation are experiencing drought, and almost 380,000 people are running short of water and pasture for their animals, it said.

Aid agencies received less than half the money they requested for aid for Somalia in 2015.