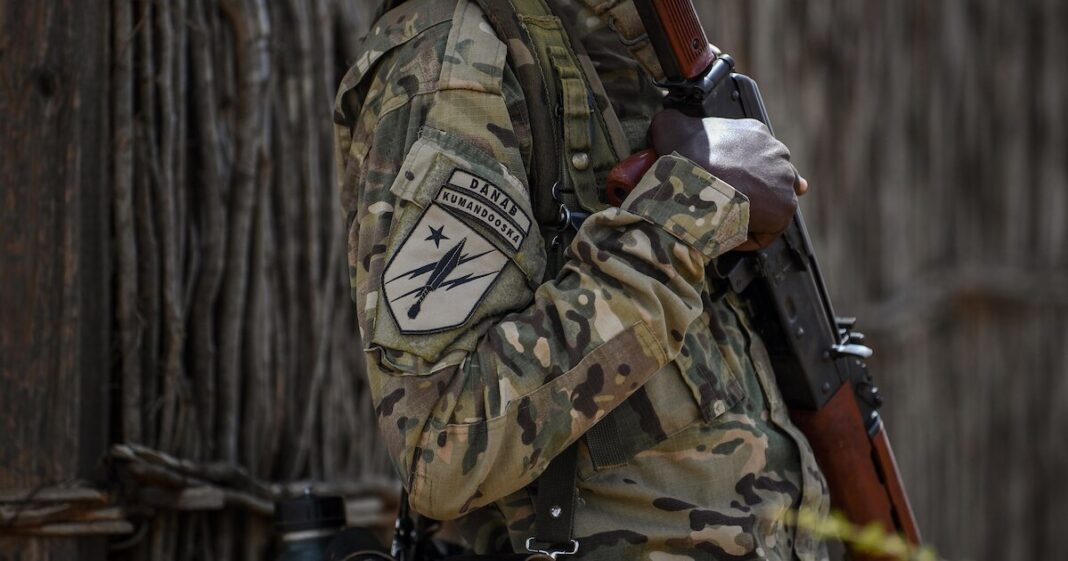 Share on Facebook
Tweet on Twitter
The Somali Security forces have been receiving training, funding and military equipment from US, Turkey and other friendly countries.
The work of rebuilding professional security is getting compromised by senior figures  in the government, who don’t understand the function of security forces as specified in the  draft constitution of Somalia. These officials do not have sufficient knowledge of the work and high standard expected the security service of a country striving to be democratic one and safeguarding the rule of law.
It is clear that the military, the police force and intelligence are not allowed to interfere political issues of the country. It should have been part of their training in the first place  and requirement of carrying out their national duties in line with the constitution.
The government should have invested money and time to teach and  instruct the members of Security agencies to be familiar with the articles of the constitution  in order for them to be well versed with their constitution. It should have be part their duty that every member regardless of his ot her rank in the service to be issued an updated copy of the constitution for self learning and reference.
Unfortunately, the services in question, at least the officers I spoke to,  don’t have  a clue this kind of constitutional education  if that is the case, they are only expected to comment serious crimes against basic human rights.
It is very common occurrences  crimes of that sort to take place on daily bases in this country. The people involved should not be allowed to get away with it.  If this country is to recover from many years of lawlessness. It is not fair a military court to try or prosecute soldiers who have not been given constitutional lessons in trainings.
The gist of this argument is that the senior officials of the government, who don’t have themselves enough knowledge of the draft constitution, will bear the responsibility of the consequences of their actions and their forces in democratic country.
For your information that Somalia has rectified all conventions relating to this matter and there should be no excuse of not following the national and international laws.
It ought to be clear to all that the people in high offices,  are well informed by now, if not they have  only to blame themselves, what they are doing can not and will not be justified if they politicise the security agencies in this country and as resukt break the law willingly or unwillingly. It is clearly against the common law and the constitution. It is illegal to misuse or abuse the power of your office and or to use government funds for personal and political reasons.
Having made that point crystal clear that there are serious accusation which should not be ignored.  There are a sensitive information relating to the issuance of illegal guns to members of the public. Any civilian who has a gun ought to have a legal licence.
It is not a secret that the opposition groups  have been voicing their concern in regarding to a militia called “Xoogagga wadaniyiinta” or in English “Forces of the country”  There are many questions relating to this group. Who are they? Who set them up? Who pays them? Who do they report to?  Which security agency do they belong to?
It is a high time to stop politicising the Somali security forces and government officials implicated in this state of affairs, should be held accountable. The Somali people have had enough experience of lawlessness and violence.  That is way It has been shrined  in all human rights law that civilians should not be harmed by any circumstances by politicians who are vying for power. The law and the agreed draft constitution of Somalia will NOT allow that sort of activities to exist. It is in line with the international conventions.
Enough is enough, the public will not allow it and won’t have the situation to go out off hand in this disputed upcomming election. The end.
By Mohamed Mohamud Adde.
The author is an academic and an Independent Somali Political Analyst who is based in Mogadishu