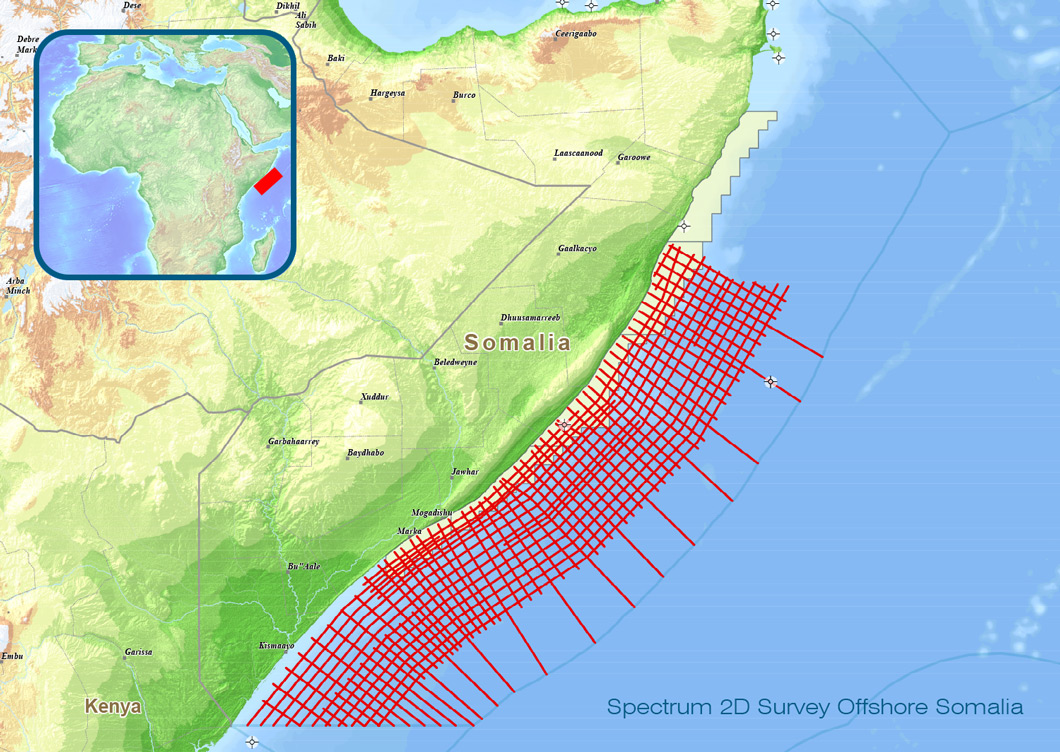 Mogadishu (HAN) (HAN) May 5. 2016. Public Diplomacy & Regional Security News. Press Releases. The federal Government of Somalia (FGS) announces the expansion of its multi-client library offshore Southern Somalia with plans to acquire more than 20,582.75 Km of 2D seismic data, in partnership with ASA, utilizing two surveys during the 2016 acquisition season; according to the briefing report obtain by the Somali Institute of Security and Diplomacy (SIRAD), to empower Somalia Statecraft. Spectrum ASA also offers an expansive well log library and advanced multi-client interpretation products that will improve play, trend and prospect delineation of the  offshore Somalia region.

This project is supported by Friends of Somalia funding. “Offshore Somalia  has been an area of high interest from exploration companies in an otherwise challenging market as evidenced by the successful licensing round in November 2015.  This will be their  second consecutive season acquiring data in partnership with FGS in this highly prospective region, targeting expected areas of Interest  to be released under the scheduled land tenure system,” commented by the project cordinator of the SIRAD institutes for FGS.

According to the Head of External Relations, the Ministry of Petroleum and Mineral Resources,  Spectrum ASA has successfully completed the acquisition of 2D seismic data offshore south Somalia. It was on the 5th September, 2015 when Spectrum ASA and the Federal Government of Somalia entered into a Multi-client master co-operation agreement with the federal government of Somalia during a signing ceremony at the SYL Hotel, Mogadishu. The survey has been completed without any incident.

The total number of sail line acquired equates to 20,582.75 Km. The new acquisition will complement 20,000 km of existing seismic that was acquired in 2014. The two surveys will allow the in-depth study of hydrocarbon prospectivity offshore Somalia.

Spectrum have started to process the data, following which interpretation will begin in the third quarter of 2016 and its findings will be announced by the Federal Government. Spectrum ASA has successfully completed the acquisition of 2D seismic data offshore south Somalia. This effort will reveal the resources, whether oil or gas, hidden beneath the sea-floor of the Indian Ocean. Furthermore, seven of the Ministry geo-scientists participated on the acquisition of the data and trained on the ship executing the seismic shooting. These trainees will go to Cairo, Egypt where they will further learn more on data processing and geologic interpretation at Spectrum’s center there.