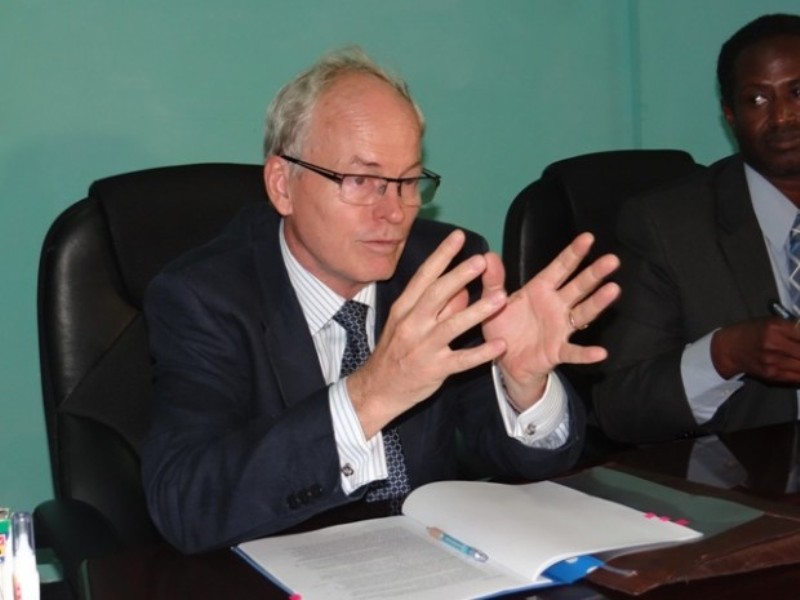 Mogadishu (HAN) July 13, 2014 . An Interview with UN Representative of the Secretary-General, Nicholas Kay. The violent attacks on Somalia Parliament headquarters, presidential palace and other major locations, the United Nations envoy to the country has called on all Somalis to unite with the authorities to thwart future attacks and “bring to justice those behind this murderous campaign of terror that has intensified since the start of Ramadan.

In a press statement, Special Representative of the Secretary-General, Nicholas Kay, condemned the attack on the Somali Parliament and the many killings claimed by Al-Shabaab since the start of the holy month of Ramadan.

The conflict in Merka and Afgooye Area, Nicholas is calling for all parties in the conflict to respect international humanitarian law, requiring safety for civilians and access to assistance from impartial humanitarian agencies. Prime Minister Abdiweli Sheikh Ahmed  is also asking the United Nations to maintain essential humanitarian coordination functions in Southern Somalia, including Merka area. A total withdrawal by UN agencies and international NGOs would give free reign to unrest and uncontrolled violence in the Southern Somalia.
The top United Nations envoy in Somalia has condemned  Al-Shabaab attacks on the seat of the Federal Government in Mogadishu, the latest in a series of attacks by Al-Shabaab militants against the country’s political institutions and Somali elites.

“Political progress in this country is only possible through the unity of its political institutions, which is why they are being attacked by those determined to plunge Somalia back into turmoil,” said Nicholas Kay, the Secretary-General’s Special Representative and head of the UN Assistance Mission in Somalia (UNSOM).

“The United Nations will continue to assist the people and institutions of Somalia as they make progress towards stability and peace,” he added today, speaking from Villa Somalia – the presidential palace and the seat of the Government,  after meetings with President Hassan Sheikh Mohamud and Prime Minister Abdiweli Sheikh Ahmed.

Mr. Kay commended the prompt action taken by the Somali and African Union security forces, who successfully dealt with the attack, as well as the Government’s swift action to learn lessons from the recent attacks and to take steps to improve the delivery of security services.

“We continue to work actively with the Federal Government, AMISOM [AU Mission in Somalia] and international partners to build strong national security institutions to secure the country,” he stated.