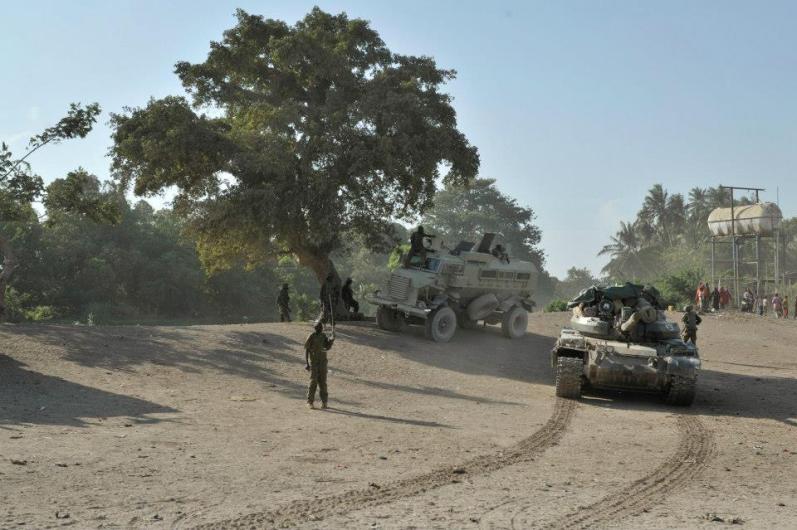 Mogadishu (HAN) March 23 2014- The Somali National Army (SNA) and AMISOM, the African Union Mission in Somalia have captured the strategic town of Qoryooley from Al Shabaab.
Qoryooley is 120 kilometers from Mogadishu, the capital of Somalia, and is one of the most populated towns in Lower Shabelle region. The capture follows extensive preparation for the offensive by the SNA and AMISOM’s Uganda contingent.

AMISOM and the SNA begun renewed offensives against the militants early this month and have so far captured eight towns across South Central Somalia. While talking to the media before the town was liberated, the AMISOM commander in charge of the operation in the Lower Shebelle, Brigadier Dick Olum, from the Ugandan Contingent says their intention is not to kill or destroy the city but to get rid of any al Shabaab elements. “Should we get resistance, then we shall go full scale, we get any small resistance, any attempt on us, we shall go full scale. But is we don’t get any resistance, even if its minor resistance then we shall just try to cool it down. Our intention is not to kill, to destroy, but our intention is to take over the city and to hand it over to government.”

The Governor of Lower Shabelle region joined the fight to liberate Qoryooley, a place he has not had the opportunity to go to in years even though it falls under his leadership. He has put away his office attire for a military one. “As you see, now I am wearing military dress, we are going to liberate Qoryooley District and now we are near.” Says Alkdir Sheikh Mohamed Nor, Governor of Lower Shebelle Region. “About Qoryooley it is a very strategic town. It is located on the bank of the Shebelle River and the terrorist and Al Qaeda are based there. They tortured, the massacred innocent people. Really the civilians have requested us to liberate them from Al Qaeda. “

Located 120 kilometers Southwest of Mogadishu, Qoryooley has been under the brutal rule of the terrorists for five years. In the last one month, many of the al Shabaab’s commanders have been fleeing towards the town following a string of defeats by the SNA and AMISOM forces. The capture of Qoryooley is also critical for AMISOM future operations to liberate the port city of Baraawe, one of the remaining sources of illicit revenue for extremist group.

The Special Representative of the Chairperson of the African Union Commission (SRCC) for Somalia, Ambassador Mahamat Saleh Annadif congratulated Somali National Army and AMISOM troops on the achievement noting that this operation demonstrates AMISOM’s continuing determination to support the people of Somalia as they embark on a new path of renewal and reconstruction.

The joint operations between the Somali National Army and AMISOM which began this month have so far liberated the eight towns in the various regions around the country, the most recent being Qurunlow town in Middle Shabelle.

ince the UN Security Council boosted AMISOM troop numbers to over 22,000, the forces who are working closely with Somali National Army have been expanding to new areas and have helped the Somali government by providing a secure environment and recovering more territory, as well as ensuring law, order and justice.
For more information, please Contact; Eloi Yao and Colonel Ali Eden Houmed, Spokespersons,
Cell phone: (Somalia) +252 699 890 772; (Nairobi) +254 702 155 126;