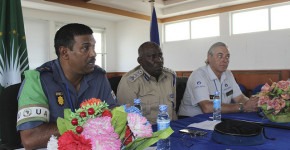 Mogadishu (HAN) June 17, 2015 – Public Diplomacy and Regional Safety and Security News – The Police component of the African Union Mission in Somalia (AMISOM) and the Somali Police Force (SPF) have unveiled a joint operational plan to ensure security in Mogadishu during the holy month of Ramadhan.

The AMISOM Police Commissioner Pillay said the upcoming joint operation arise from an analysis over the past years that indicates an increase in criminality by Al-Shabaab during the Holy month of Ramadhan.

“Firstly, in terms of the Ramadhan season, we have seen there is an increase of incidents that take place. For the previous two Ramadhan seasons, there was an increase of IED (Improvised Explosive Device) attacks, suicide bombers as well as breaching community safety because large groups of people gather and they are easy targets for IEDs and attacks on them,” Pillay said.

The SPF commissioner Mohamed said, “We are having a terrorist threat as you are aware. We are in a vulnerable situation but we have to perform as best as we can with the support of AMISOM police and AMISOM military and other Somali security institutions.”

Pillay said the upcoming operation will be in line with the AMISOM Police’s mandate of providing operational support to the Somali Police through mentoring in order to build the capacity of SPF to perform policing functions according to international policing standards.

As part of a comprehensive operation plan, AMISOM and SPF officers managing the joint operations will be stationed at the Somali Police headquarters on a 24 hour basis to perform functions that include, but not limited to directing ground personnel, monitoring public safety, and ensuring public safety concerns are addressed.

Earlier on, the Minister of Internal Security Abdirizak Omar Mohamed commissioned a communication operations system installed at the Police Headquarters. Also, present during the launch was Lucien Verneir the Acting Police Commissioner for UNSOM. The equipment installed by Motorolla, is a donation from the Japanese Government with support from AMISOM Police and UNSOM.

The equipment is expected to boost the operations of the SPF through improved communication and timely response to calls for action, among other functions.

Minister Abdirizak said that the Federal Government of Somalia is committed to build the capacity of the Police Force through recruitment of personnel and providing necessary equipment to aid maintenance of law and order.

“We are trying to improve and enhance the capacity of the current police force as well as recruit new police officers that have completed formal education. We are also trying to increase the number of female police officers,” said Minister Abdirizak.