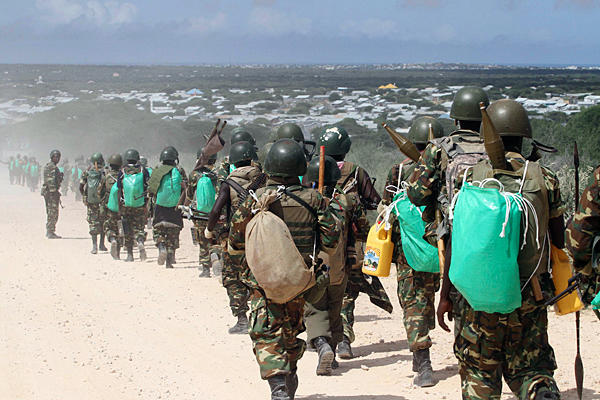 Mogadishu, March 20th, 2014 – The military offensive by the Somali National Army (SNA) and the African Union Mission in Somalia (AMISOM) in southern and central Somalia continues as the most of the humanitarian needs have arisen so far, are related to population movements – either people moving out of towns affected by the military operation, or people previously displaced moving back to newly recovered areas.

According to the UNOCHA’s flash update report, more than 46,000 of people have reportedly been displaced in the last three weeks, according to humanitarian partners. The pattern of displacement indicate that some displacements are expected to be short-term in nature as people usually leave towns to go to outlying villages as a pre-emptive measure to avoid conflict zones. Reports received from affected districts indicate that people who could afford transport have travelled to larger towns already in the hands of Government-aligned forces, as these are deemed safer. However, households who could not afford transport reportedly relocated to villages around the main towns affected by the military operations.

The regional breakdown of the reported displacements remains fluid. So far unconfirmed reports indicate the following: Bakool (1,300 to 1,800 people), Bay (16,000 to 19,000 people), Gedo (540 people) and Hiraan (21,000 people). Meanwhile, over 4,000 people have reportedly moved into towns that have opened up such as Xudur (Bakool region) and Buur Dhuubo (Gedo region). Shelter, household items, food, safe drinking water and healthcare have been identified as the priority needs, although not all of the temporarily displaced people are expected to need assistance. Civilians also face protection risks both in places of origin and displacement given the fluid security situation.

Bakool region: Humanitarian partners have reported that up to 1,800 displaced people are currently in Kurto town, having fled from Waajid and Xudur towns. On 12 March, aid workers delivered medical supplies to Kurto town in Waajid in Bakool. Even though the hospital needs rehabilitation, a doctor, two nurses and support staff are providing health services. In Xudur and other parts of Bakool humanitarian partners are planning to conduct a rapid needs assessment. The findings will inform the type and level of assistance that will be provided to those in need.

Gedo region: An estimated 540 people had arrived in Luuq town in Gedo from Waajid in Bakool and Buur Dhuubo in Gedo region as of 15 March, according to local partners. The displaced people have received water, sanitation and hygiene supplies.

Hiraan region: On 14 March, SNAF/AMISOM forces captured Bulo Burto town, Hiraan region. Although not confirmed, aid workers operating in the area reported that an estimated 3,500 people were displaced by the military operations in Bulo Burto. The majority of these are Bulo Burto town residents who fled to outlying villages. Most of the people have settled with relatives and the host community. In the administrative capital Belet Weyne, the hospital provides primary and secondary health services.

The Federal Government of Somalia on 15 March reported that food donated by Turkey had been deployed on convoys from Mogadishu to areas affected by the offensive.

March and April mark the start of the planting season for the Gu rains. The ongoing military offensive could disrupt the early start of the planting season, which could in turn have a negative impact on the annual Gu harvest in August/September 2014 particularly in the agricultural zones of the Shabelles, the Jubas and the sorghum belts of Bay and Bakool. Although not yet wide-spread, rains have already started in parts of southern and central Somalia, which could aggravate the living conditions for those newly displaced.

It is too soon to predict the longer-term implications of the military operation on unfettered, safe and predictable humanitarian access. Original published by Source: RBC Editorial