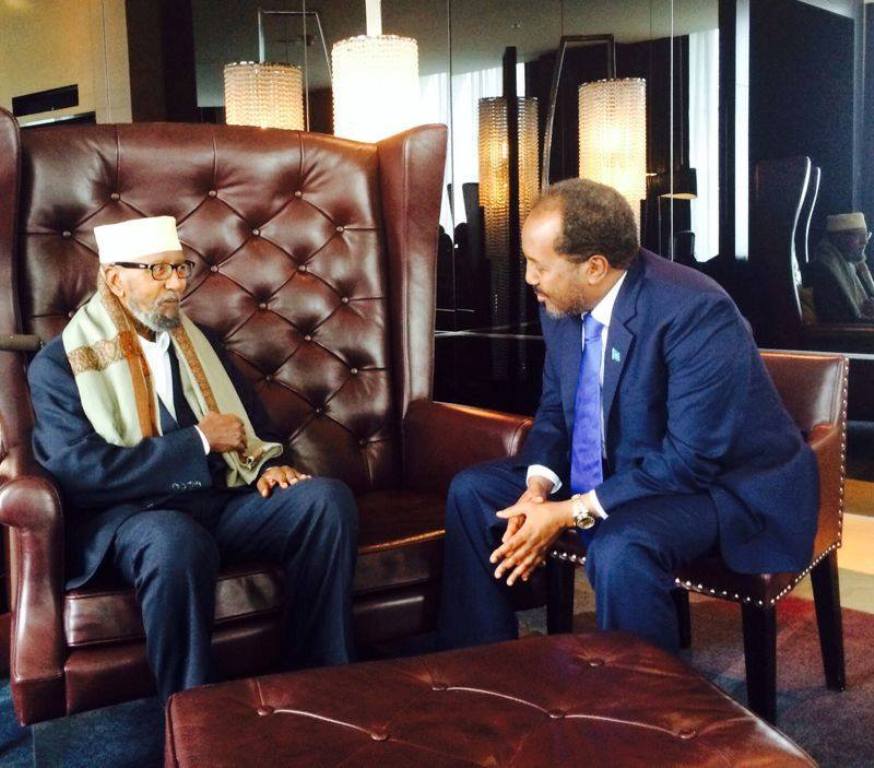 Minneapolis (HAN) August 12, 2014 Community and Public diplomacy news By Mukhtar Ibrahim, MPR in Minneapolis. Somali President Hassan Sheikh Mohamud urged Somali-Americans gathered Saturday night at the University of Minnesota’s Northrop Auditorium not to raise money for al-Shabaab, and he called on parents to prevent their children from being brainwashed by the militant group.

He said al-Shabaab is now in retreat, and that parents in Somalia are taking part in the fight against the militant group by turning in their children who have joined al-Shabaab.

“Somalis in Minnesota, you should also play your part,” Mohamud told thousands of flag-waving Somalis. “The enemy that is in [Somalia] is also in here. Keep your children safe.”

Mohamud, who spoke at the end of an evening of songs and speeches, called on all Somalis to work together to overcome their differences and build a future together.

His visit to the Twin Cities, home to the largest Somali community in the U.S., was accompanied by Omar Abdirashid Ali Sharmarke, the first Somali ambassador to the U.S. in more than two decades, and by senior Somali government officials. Gov. Mark Dayton and Rep. Keith Ellison also joined Mohamud during his speech at the auditorium.

Mohamud arrived in Minneapolis three days after he participated in the U.S.-Africa Leaders Summit in Washington, D.C., an event organized by President Obama to promote trade and investment in Africa and foster ties between the U.S. and the continent. There, in interviews with media outlets, Mohamud expressed cautious optimism about the country’s growth and security situation.

On Saturday morning, Mohamud and Ellison held a conference at a hotel in Minneapolis to meet with some of the local diaspora community.

‘We don’t want all of you one day to move and come to Somalia. We want you [to stay] here also. But we want you to be on both sides,’ Mohamud told the crowd at the hotel, urging Somali-Americans to help Somalia however they can.

Ellison, addressing the audience at Northrop, said “Mohamud has signaled a new bright light for Somalia.”

During his brief speech, Ellison said President Obama had signed his Money Remittances Improvement Act into law on Friday. The law will make it easier for Somali-Americans to send money to their relatives overseas.

For the last couple of years, American banks threatened to close the accounts of Somali-American money transfer companies in Minnesota over concerns that these companies could be used for laundering money that ends up in the hands of al-Shabaab.

Mohamud was elected by Somalia’s parliament in September, 2012, the first election held inside the country since 1960s. But critics say his government has ineffective and weak institutions, high levels of corruption, and is ineffective battling a militant group, al-Shabaab, which has ties to al-Qaeda

‘Al-Shabaab is an organization with which its ideology has no citizenship and no boundaries,’ Mohamud said, whose speech was dominated by discussion of security challenges. “The only enemy that Somalia has is al-Shabaab.”

Outside the Northrop Auditorium, about a hundred or so protesters hoisted banners and chanted slogans denouncing the president’s visit, calling him a tribalist and a corrupt leader.

“We’re here to let him know, his time is up. Somalia would need a leader whose going to institute for democratic [change], who takes care of his people, who is an honest and law-abiding president, not one with contact with al-Shabaab,” said 34-year-old Abdul Abdi of Hopkins. “And he belongs to al-Shabaab, and we’re going to send him back to al-Shabaab, this president.”

Abdirizak Said, 27, who came to U.S. in 1999, said there is a lack of youth representation in the current Somali government. “My concern is we seem like our youth are kind of lost, in the middle, because our foundation is usually based on the older people,” he said. “And I haven’t seen anything, like I have heard a couple of his speeches that he had previous, I’ve never seen any mentions of the youth and what his goal for the youth [are].”

But Mohamed Guulwade, a truck driver from Nebraska who was watching singers entertain the crowd inside the hall with Somali songs, said he believes that the protesters are opposing the president because he belongs to a different clan. “When the president came into power, al-Shabaab was still there. It will take time for the president to defeat al-Shabaab and improve the security in the country,” he said. “We need to be patient.”

And that is exactly what the president told the audience in his speech. He said with the level of destruction in the country, it is not easy to build a government and a credible federal system in a matter of a few years. He added that Mogadishu’s security situation should not be judged with a yardstick similar to one used in Minnesota, but should be measured same one used in Kabul or Baghdad.

“If we fall down, do not criticize us, but cheer us up,” he said, smiling. “If you ridicule us whenever we fall down, we may not move forward.”