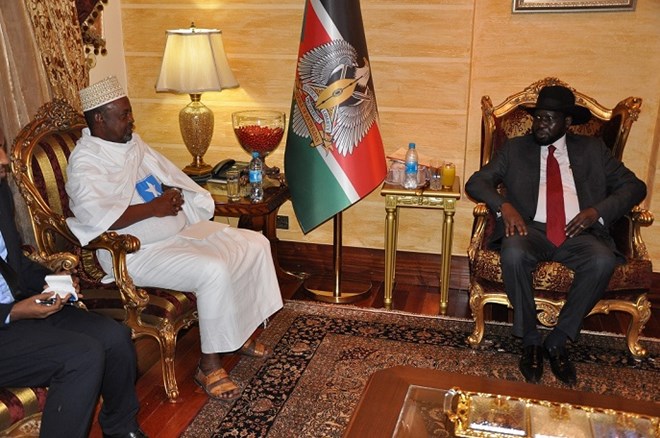 Juba (HAN) 27 April, 2017 – Public Diplomacy & Regional Investment for Stability. The Somalia ambassador to South Sudan, Hussein Hajji Ahmed Mohamoud has urged the South Sudanese government to protection the Somalia businessmen in the war-torn, amid heavy deployment of troops in various parts of the capital, Juba.

The envoy made the request during a meeting with South Sudan’s interior minister, Micheal Chiengjiek Geay on Wednesday.

“The meeting resolved the issue of security challenges facing Somalia nationals residing in Juba and across the country”, the Somalia envoy told Sudan Tribune.

The interior minister, on his part, said they discussed numerous factors, including the protection of all foreign traders in the country.

The two officials, at the meeting, reportedly also discussed related security issue facing both countries and vowed to cooperate in security sectors. In the past, South Sudan pointed fingers on foreigners living in the country for alleged involvement in crimes.

However, Cheingjiek said such crimes would not be tolerated anymore and those who commit crimes would be dealt with.

“I urged Somalia citizens to distance themselves from criminal activities like human trafficking, money laundering or counterfeit,” urged the minister, adding that the government would direct the security organs, immigration and customs department to monitor borders in relation to any violation of cross borders regulations.

Currently, the majority of traders who operate and sell goods in the South Sudanese capital and in other parts of the country are foreigners, most of them from Uganda, Kenya, Ethiopia and Sudan.

South Sudan, which recently joined the East African Community (EAC), is a big beneficiary of Northern Corridor and will gain from various interventions that have increased the corridor efficiency. In South Sudan, Trade Mark East Africa (TMEA) is working with national monitoring committee to implement Non-Tariffs Barrier (NTBs) elimination strategy.

Removal of key NTBs has reportedly contributed to a 14% reduction in time taken to import goods from one East African country to another, a recent independent evaluation of the NTBs trade program, shows. Sources – Sudan Tribune