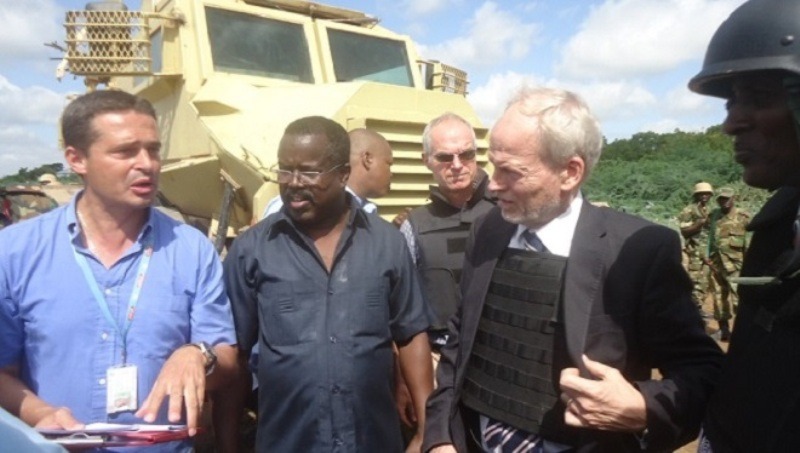 Ambassador Nicholas Kay has toured Jowhar as a fact finding mission regarding the humanitarian crisis, security, Al-Shabaab infiltration mitigation and the flood issues in the region.

Ambassador Nicholas discussed with traditional leaders on how aid agencies can be facilitated on the areas affected by the recent flooding after the heavy rains in the region.

Ambassador Nicholas has also assessed the damages caused by the recent flooding in the region that destroyed farmlands and swept away hundreds of live stocks.

This was Ambassador Nicholas’s first visit to Jowhar region since he took office as the the Special Representative of the United Nations Secretary General for Somalia.

Despite its mixed progress in decades of war, State collapse and immense human suffering, Somalia could reach its goals of elaborating an agreed Constitution, installing a nationwide electoral process and ensuring greater security by 2016, a senior United Nations official told the Security Council today.

“The best hope for peace and stability in Somalia, the Horn of Africa and beyond remains a united, secure and federal Somalia,” said Nicholas Kay, Special Representative of the Secretary-General and Head of the United Nations Assistance Mission in Somalia (UNSOM), via video link from the country’s capital, Mogadishu.  Noting that the security situation there had deteriorated abruptly, he recalled three suicide attacks that had occurred last month, the first against a United Nations convoy, the second against the presidential compound, Villa Somalia, and the third near the headquarters of the national intelligence service.

Emphasizing that the risk of further attacks against Government and international targets remained high, he said that an expanded African Union Mission in Somalia (AMISOM), as well as the Somali National Army were prosecuting a renewed military offensive against Al-Shabaab, as authorized by Security Council resolution 2124 (2013).  “There have already been notable successes,” he said, underlining the logistical support provided by UNSOM and the United Nations Support Office for the African Union Mission in Somalia (UNSOA).

The United Nations had also taken measures to improve its own security, he continued, noting that the Organization would deploy the Guard Unit in April to protect its personnel and facilities in Mogadishu.  In order to develop strong, professional national security forces, UNSOM was providing uniforms, support for biometric registration, and for the recruitment of 2,300 police officers.

On the political front, Mr. Kay said, Somalia now had a new federal Government led by Prime Minister Abdiweli Sheikh Ahmed.  His Cabinet contained experienced, technocratic Ministers whose work plans were built around the priorities set forth in the New Deal Compact.  The federal Government was finalizing a detailed plan and a timetable for a process that would lead to the formation of federal states, a final Constitution and democratization by 2016.

He said UNSOM was also working with AMISOM and the national army to provide training on human rights, international humanitarian law and refugee law.  Describing the country’s humanitarian crisis as one of the world’s largest and most complex, with an estimated 2.9 million people needing immediate life-saving and livelihood support in the next six months, he warned that conditions in Somalia were not yet conducive for a massive return of refugees from neighbouring Kenya, despite the signing of a tripartite agreement by the two nations and the Office of the United Nations High Commissioner for Refugees (UNHCR) on voluntary repatriation.

Yet, Saudi Arabia had begun deporting Somali nationals and more than 22,000 were estimated already to have returned, he noted, adding that an additional 33,000 were due for possible deportation in the next three months.  He urged the international community to strive for faster success in rebuilding the shattered State by translating good plans into concrete actions.  “The Federal Government is frustrated with the slow delivery of tangible assistance,” he stressed.

Elmi Ahmed Duale (Somalia) agreed with Mr. Kay’s account of the current situation in his country, and noted that the Minister for Foreign Affairs had expressed his commitment to fulfilling the requirements set out in resolution 2142 (2014).  In addition, an assessment team was on its way to begin its work in Mogadishu, with the aim of helping the Government implement the resolution’s requirements on the handling, monitoring and storage of weapons, he said, emphasizing that there was a greater need than ever for a trust fund to help the Government and its forces to fulfil their obligations.  Yet, he expressed concern that, even though some territory had been liberated from Al-Shabaab, including in Puntland, the group could infiltrate other safe areas.  Voicing satisfaction with AMISOM’s operations, he said the important thing now was to ascertain Somalia’s capacity to fulfil its obligations under resolution 2142 (2014).