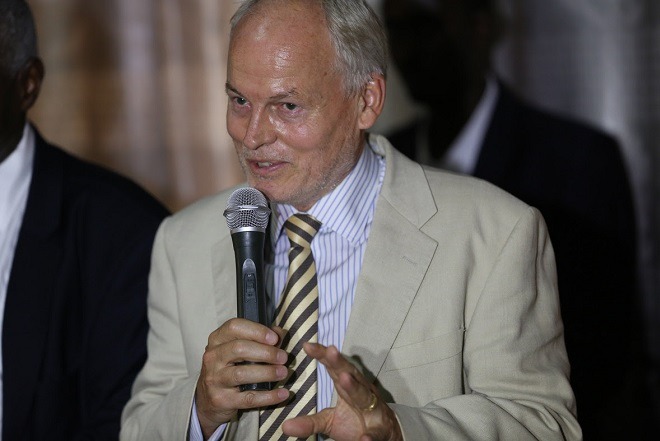 Nicholas Kay, Special Representative of the Secretary-General for Somalia (UNSOM), much more remains to be done if it is to meet hopes for future of Somalia, discussed the challenges facing Somalia, while Ambassador Kay, attending World Youth Day in Mogadishu.

Somali Youth take a leading and important role in every country, determining its future. They are absorbed in youth organizations and are considered as the driving force of society.

The challenges facing Somali youth, although arguably more extreme, represent a microcosm of the wider African generational narrative and this leads international development agencies to a crossroads in terms of where best to channel future assistance.

Ambassador Kay compared the rebuilding of Somalia to building a house. The foundations of the new Somalia are the emerging federal member states, he said, the walls are the constitution and the constitutional review, and the roof is democratization and elections. These are the three stages that Somalis have set for themselves, he said.

The Vision of the supperpower strategy in Somalia: “We will have firm foundations by August of 2016,” Mr. Kay said.

“The walls will be half finished, to be complete after 2016, and the roof will be a temporary roof… Nobody expected it to be quick or easy to rebuild that Somali house. I think if we do it in sensible, pragmatic stages and there is a strong commitment in 2016 to whatever happens—a transfer of public office, a new parliament which will elect a president—through a process that is the best possible we can achieve, then I think that would count as a success.”

To Empower IGAD: “This tells us there is a need for a concerted regional and international action to curb this new development.”

To distroy the power and the hope of Somali Youth: With 70% of Somalia under the age of 30, Ambassador Sidikou highlighted the importance of the youth in Somalia, arguing that the youth need hope and initiatives to shift them away from the propaganda of al-Shabaab.

The only legitimate Somali Government is: “We must have a Somali army and police to safeguard the country,” he said. “That’s the only way to set the security conditions for stabilization in order to extend the government’s authority and legitimacy throughout the country.